Iran has warned the UAE and Bahrain that they will be responsible for ‘severe consequences’ that will be caused by signing of an historic peace deal with Israel.

Hassan Rouhani, the Iranian President, blasted leaders of the two Arab states over the deal and accused them of forgetting ‘their debt to the Palestinian people’.

‘How could you reach out your hands to Israel? And then you want to give them bases in the region? All the severe consequences that would arise from this are on you,’ he said in televised remarks. 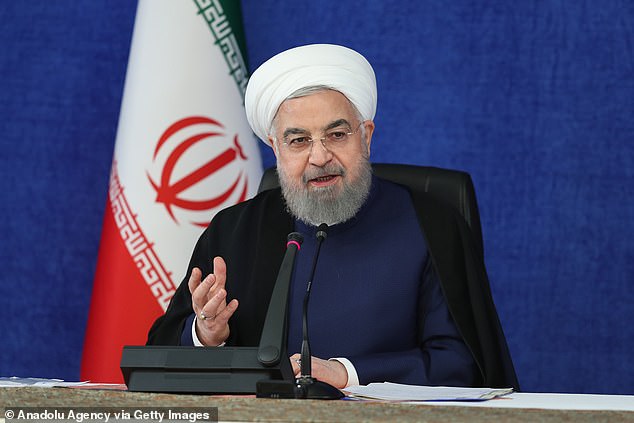 Hassan Rouhani, president of Iran, has warned the UAE and Bahrain that they are facing ‘severe consequences’ after signing an historic peace deal with Israel 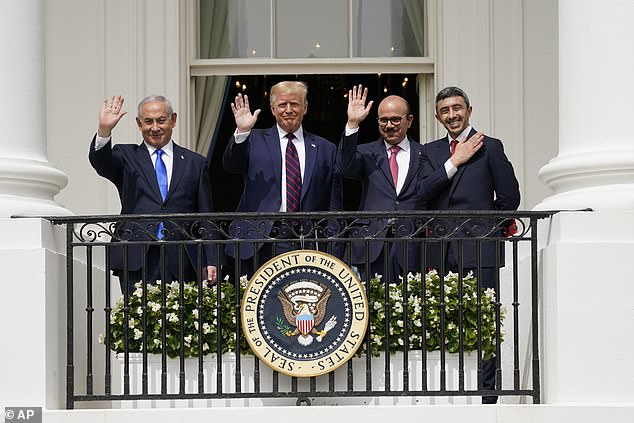 Donald Trump hailed the deal as ‘a new dawn in the Middle East’ as it was signed in Washington, saying he believed more Arab states would sign up soon 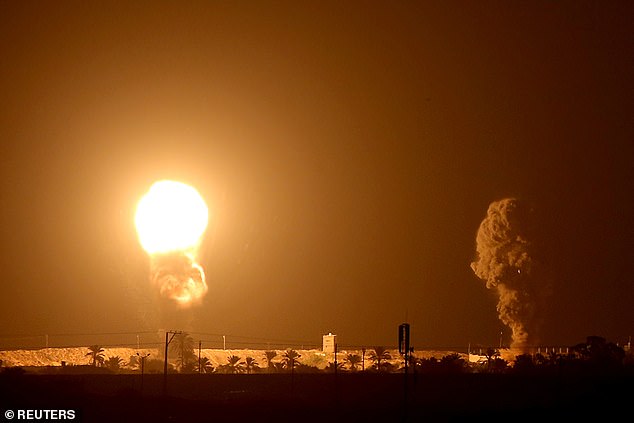 As the signing took place, two rockets were fired at Israel from Gaza, prompting the Israeli air force to strike targets it said belonged to Hamas (pictured), which controls the Gaza Strip

The pact normalises diplomatic and economic relations between the three states, and breaks with years of consensus among Arab countries that a deal recognising Palestine is a necessary precursor to any accord with Israel.

Egypt and Jordan are the only other Arab states to have recognised Israel.

Palestinian leaders bitterly oppose the deal, fearing that it will prompt Israel to give up on the peace process, destroying their hopes of statehood.

Iran, a staunch supporter of the Palestinian people, also opposes the deal.

In his Wednesday address to the nation, Rouhani accused Israel of ‘committing more crimes in Palestine every day’.

‘Some of the region’s countries, their people are pious Muslims but their rulers neither understand religion nor (their) debt … to the nation of Palestine, to their brothers speaking their language,’ he added.

The deal signing – which took place in Washington on Tuesday – has sparked protests across Gaza, the West Bank and Ramallah, home of the Palestinian Authority.

It also saw two rockets fired overnight from Gaza towards Israel, which were timed to coincide with the ceremony.

Two missiles were fired from Gaza, one of which was intercepted by the Iron Dome defence system, and the other of which landed in the southern city of Ashdod. 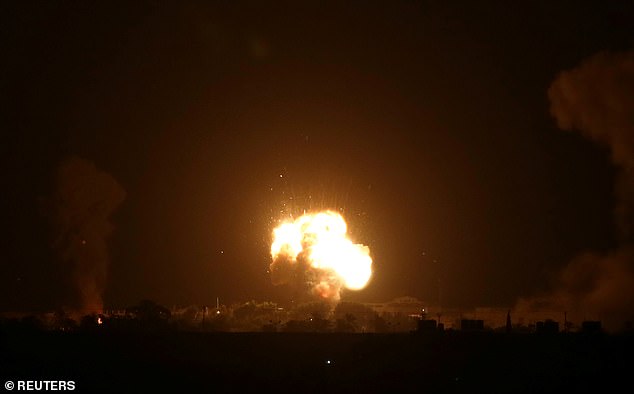 While no group claimed responsibility for the attacks, the Israeli Defence Force laid the blame at the feet of Hamas, accusing it of ‘terrorism against Israeli civilians’ 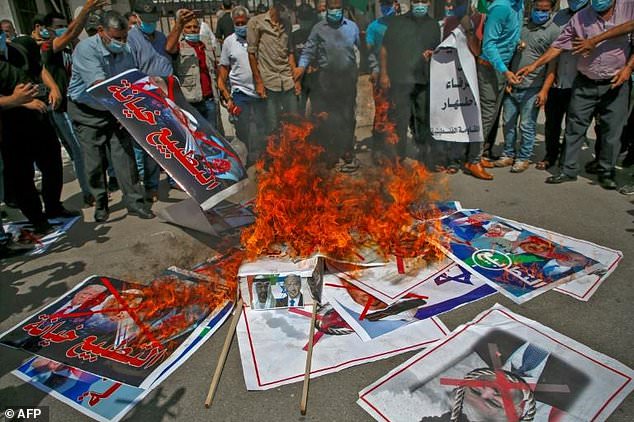 Hundreds of protesters burned pictures of Donald Trump, along with the leaders of Bahrain, Israel and the UAE in fury at the deal 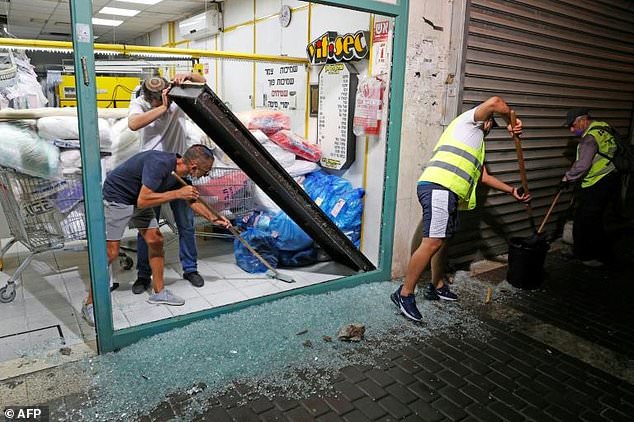 The Israel Defence Forces said Wednesday that their fighter jets responded with air strikes on military targets belonging to Hamas, which controls the Gaza Strip.

There was no immediate claim of responsibility for the rocket fire from the various Palestinian factions operating in Gaza.

But the IDF levelled blame at Hamas and warned that it would ‘bear the consequences for terror activity against Israeli civilians’.

Meanwhile, hundreds of protesters took to the streets in the West Bank cities of Nablus and Hebron, and in Gaza, to protest the signing of the peace accord.

Hundreds also took part in a demonstration in Ramallah, home of the Palestinian Authority (PA).

The deal states that the UAE and Bahrain officially acknowledge the existence of the Jewish state, and will establish diplomatic and economic ties with it.

The deal breaks with decades of consensus among Arab nations that a peace deal between Israel and Palestine is a precursor to further peace deals in the region.

Egypt and Jordan are the only other Arab states to officially recognise Israel.

Palestinians oppose the deal, fearing that it will prompt Israel to abandon the peace process and with it their hopes of establishing an independent Palestinian state. 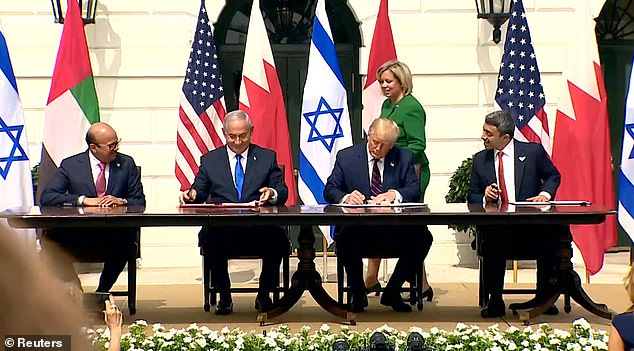 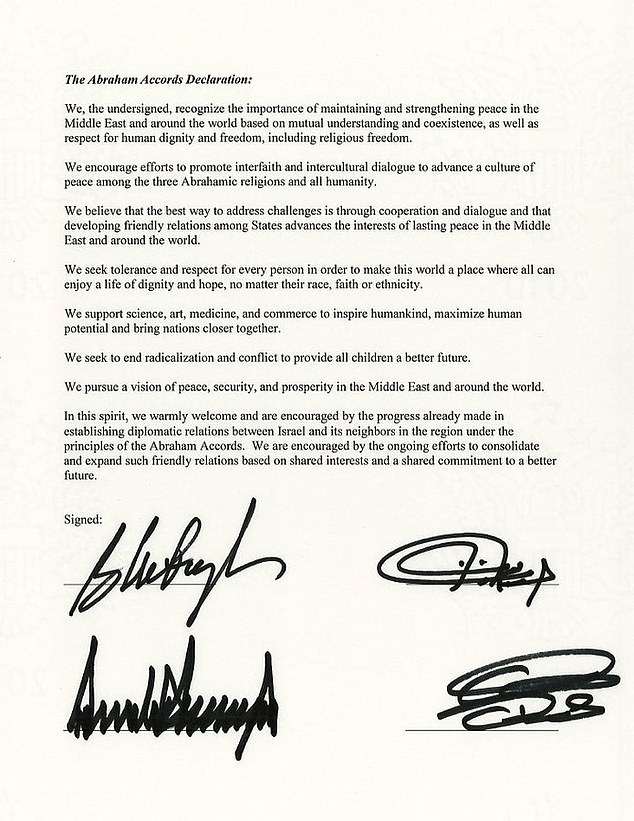 Abbas warned that the deals would ‘not achieve peace in the region’ until the US and Israel acknowledged his people’s right to a state.

‘Peace, security and stability will not be achieved in the region until the Israeli occupation ends,’ he said.

In Gaza, protesters trampled on and set fire to placards bearing images of the leaders of Israel, the UAE and Bahrain.

That latest rocket fire came after a month in which militants in the strip had stepped up incendiary balloon attacks against Israel, which responded with nighttime air strikes against Hamas.

Hamas has joined the PA in condemning the UAE and Bahraini accords as a ‘betrayal’ of their cause.