Just after 2pm, more than 1 million customers in New Jersey were reported by utility companies to be without power, and, in New York City and the nearby downstate area, that number was more than 230,000. It was not immediately clear how long the outages were expected to last. 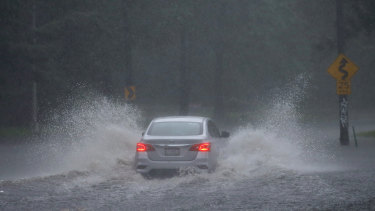 A car drives down a flooded street during Tropical Storm Isaias in Philadelphia. Credit:AP

"This storm is escalating quickly, and the numbers are rapidly changing," Governor Philip D. Murphy said around noon on Twitter in reference to the outages.

The storm, which made landfall in North Carolina as a hurricane, has been swiftly moving up the East Coast. In North and South Carolina, Virginia and other coastal states, there were reports of damaged buildings, power outages and downed trees.

At least two people were killed after a tornado touched down in Bertie County, North Carolina, and caused significant damage to a neighbourhood there.

The National Weather Service said on Tuesday afternoon that "strong and damaging winds are spreading northward into the New York City metropolitan area that could knock down trees and power lines." 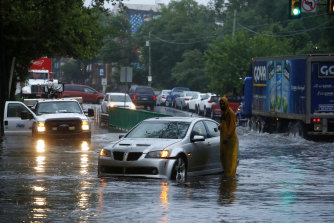 A man checks on a stranded vehicle during Tropical Storm Isaias.Credit:AP

The Weather Service said that tornadoes were forming in northern New Jersey, but did not immediately specify where.

Patrick O'Hara, a meteorologist with the Weather Service, said it was tracking reports of at least two tornadoes Tuesday: one in Strathmere, in southern New Jersey, where heavy damage was not immediately reported; and another near Dover, Delaware.

Photos and videos posted on social media showed trees snapped and pieces of buildings blown on top of vehicles in Dover. 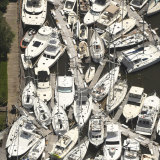 Boats are stacked on top of each other in the Southport Marina in Southport N.C.Credit:AP

O'Hara said his office, which covers most of New Jersey, has received multiple reports of street flooding and trees blocking roads. Heavy rains had caused flash flooding along creeks and roads in southeastern Pennsylvania, O'Hara said.

Strong winds, with gusts of more than 73 mph (117 km/h), were possible into the evening along the New Jersey and Delaware coasts, according to the Weather Service. The rain was expected to taper off in the late afternoon.

Before the storm hit, Governor Andrew M. Cuomo said in a statement on Tuesday that some inland areas in New York state could see up to 15 centimetres of rain.

He said the state had deployed rescue teams, with boats and high-water vehicles, to areas that could be hardest-hit by the storm. The state had also sent out water pumps, chain saws, sandbags and bottled water.

Officials in New York City urged residents to be vigilant for heavy wind and rain and to expect power loss. And on Tuesday afternoon, the Metropolitan Transportation Authority said some aboveground subway service, the Metro-North Railroad and Long Island Rail Road were all temporarily suspended.

Beaches were closed on Tuesday.