Jeremy Hunt was desperately scrambling to defuse a fox hunting row today after he vowed to push for the ban to be lifted.

The Tory leadership hopeful said he would bring the issue to the Commons if he thought there was a majority for reversing the law – and he personally believed hunting should be allowed.

But the comments were condemned by Labour, which said fox hunting was a ‘barbaric practice’, and Tories also highlighted that Theresa May made the same pledge before the disastrous 2017 election.

Mr Hunt tried to draw a line under the controversy this morning by insisting lifting the ban was ‘not something that is going to happen’.

‘There isn’t a majority in the House of Commons and I don’t see there ever being one,’ he told BBC Radio 4’s Today programme. 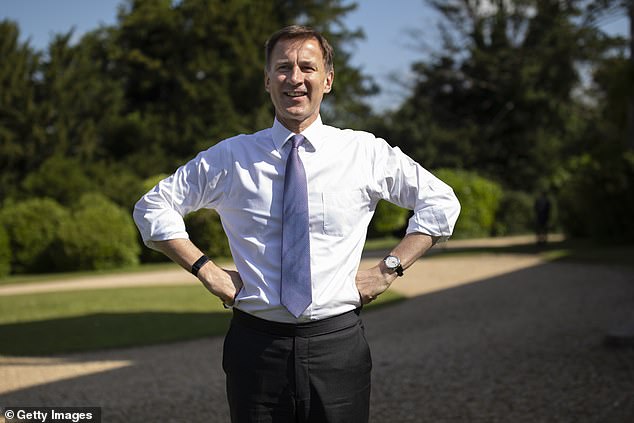 In an interview with the Telegraph overnight, foxhunting was ‘part of the countryside’ and that he was ‘happy for people to do it’ despite it ‘not particularly (being) my thing’.

However, Mr Hunt’s push to change the law Speaking to the Daily Telegraph, Mr Hunt said he would support a vote in Parliament when there was a majority in the Commons likely to back the move.

He said: ‘I don’t hunt myself. It’s not particularly my thing.

‘Look, I think we have to recognise it’s part of the countryside.

‘And I think we have to recognise that in terms of the balance of the countryside it’s part of our heritage.

‘So personally I’m happy for people to do it.’

The move comes as ballot papers for the Conservative leadership contest between Mr Hunt and Boris Johnson begin to be sent to the party membership.

Fox hunting was banned in England and Wales following the introduction of the Hunting Act 2004 – which came into force a year later.

The legislation permits drag hunting where hounds are trained to follow an artificial scent.

This is not the first time a potential repeal of the legislation has been suggested.

The Conservative-Liberal Democrat coalition agreement included a pledge to ‘bring forward a motion on a free vote enabling the House of Commons to express its view on the repeal of the Hunting Act which ultimately did not take place. Fox hunting was banned in England and Wales following the introduction of the Hunting Act 2004 – which came into force a year later. Pictured is a drag hunt in 2010

Theresa May also scrapped plans for a vote in 2018, saying: ‘I think there was a clear message about that and that’s why I say there won’t be a vote on fox hunting during this parliament.’

The League Against Cruel Sports said the pledge showed Mr Hunt was ‘out of touch with public opinion’.

They added: ‘The last time a politician said we should bring back hunting – Theresa May in the 2017 General Election – she was punished in the polling booths. Nothing has changed.’

‘We’ve had Johnson’s tax cuts for the wealthy, a race to the bottom on no-deal Brexit, and now a pledge to bring back this barbaric practice that Labour had proudly banned.’