London: All social distancing and mask-wearing rules will be abolished in England as Prime Minister Boris Johnson gambles that his world-leading vaccine rollout will blunt the impact of an impending surge of new infections.

Announcing a landmark shift from “government diktat to relying on people’s personal responsibility”, Johnson said vaccines offered Britain the chance to fundamentally alter how it treats the pandemic.

But he predicted a growing third wave would likely produce 50,000 new infections each day by the middle of the month, prompting alarm from some experts who fear eliminating restrictions on July 19 is too risky. 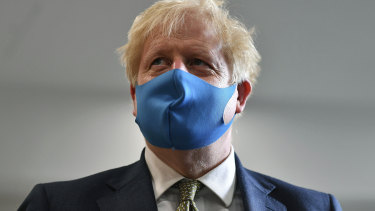 Masks will no longer be mandatory on public transport or in shops, capacity limits for indoor venues will be lifted, advice for people to work from home will be scrapped and fully vaccinated people will no longer have to quarantine upon return from countries with limited transmission.

Businesses will also be freed of their legal responsibility to display QR codes for customers to check in.

Johnson said the barnstorming vaccine rollout – nearly nine in every 10 adults has had one dose, while two-thirds have had the full two – had driven down rates of hospitalisations and death to the point the UK faced a now-or-never moment.

“We must be honest with ourselves,” Johnson said.

“If we can’t reopen our society in the next few weeks, when we will be helped by the arrival of summer and the school holidays, we must ask ourselves, ‘when will we be able to return to normal?’.

“And to those who say we should delay again, the alternative to that is to open up in winter when the virus will have an advantage, or not at all this year.”

Asked whether he would still wear a face mask, Johnson said it would depend on the circumstances.

“Clearly there’s a big difference between travelling on a crowded tube train and sitting late at night in a virtually empty carriage on the main railway line.

“What we want to do is for people to exercise their personal responsibility but to remember the value of face coverings both in protecting themselves and others.”

Chief medical officer Chris Whitty appeared less enthusiastic about making masks voluntary and made a point of noting politicians were behind the decisions announced at Downing Street on Monday.

Robert Dingwall, a professor of sociology at Nottingham Trent University, said the benefits of masks had always been uncertain because of the “weak” quality of the evidence in both directions.

“Any benefit has probably been quite small … and needs to be offset by the psychological impact on population fear and anxiety, on children’s learning and interactions with adults, on people with communication issues, and on the substantial number of adults who cannot wear masks because of underlying health conditions or other disorders.

“In my opinion it is a positive step to make mask wearing voluntary. No government can know all the circumstances of individual immunity and context.”

“Allowing people to make their own choices on this is, effectively, handing control of the safety of [crowded] spaces over to the least informed, least caring and indeed the most callous members of society.”

Johnson has responsibility for England’s strategy. Wales, Scotland and Northern Ireland run their own health and education systems and will make their own decisions about social distancing rules.

Some 27,000 new cases were reported across the UK on Monday, with infections doubling roughly every nine days.

However the vaccination campaign has slashed the number being admitted to hospital or dying. Nine new deaths were recorded on Monday.

Johnson said the UK should prepare for hospitalisations and deaths to rise over summer because not everyone will have been vaccinated, vaccines are not 100 per cent effective, and the virus will continue to circulate.

“What we have achieved with the vaccine rollout has put us in a very strong position by comparison with many other countries, in terms of the wall of protection we have,” he said.

“But we must remain cautious. I don’t want people to feel this is, as it were, the moment to get demob-happy, this is the end of COVID. It is very far from the end of dealing with this virus.”

A final decision on whether to authorise the removal of restrictions will be made next week.

There is also a chance London Mayor Sadiq Khan may ignore Johnson’s decision on face masks and keep them as mandatory on public transport in the capital.

Unite, the union representing transport workers, described voluntary masks as “an act of gross negligence by the government”.

“Rates of infection are continuing to increase and not only does mask wearing reduce transmissions, it helps provide reassurance to drivers and to passengers who are nervous about using public transport,” said the union’s national officer Bobby Morton.