I’m so proud she’s turned into a midlife sex symbol! Kate Garraway’s braved an eye-popping bikini in the I’m A Celebrity jungle and won a legion of new fans… and her husband Derek Draper couldn’t be happier for her

Strewth! Not since singer Myleene Klass appeared in the jungle shower wearing that white bikini in 2006 has a swimsuit-clad body caused such as ruckus on I’m A Celebrity . . . Get Me Out Of Here!

This time, however, the campmate sending temperatures soaring on the ITV reality series isn’t a pneumatic twentysomething with an established male fanbase, but a middle-aged woman with — until recently, anyway — a palpable fear of stripping off in public and a self-proclaimed cellulite problem.

Before she arrived in the jungle last month, 52-year-old Kate Garraway lamented her ‘ordinary’ figure and declared herself ‘very nervous’ at the prospect of revealing it. 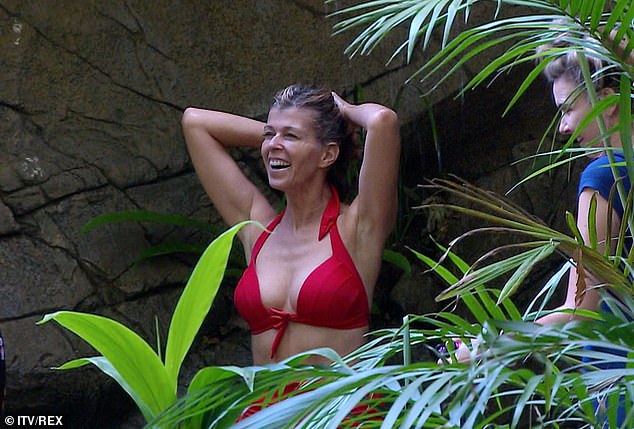 Nonetheless, on Sunday’s show, the breakfast TV presenter finally swapped her conservative one-pieces for an eye-popping red bikini — a garment she’d packed without knowing whether she’d possess the bravery to bare all.

But — hoorah! — she went for it and, standing by the jungle shower, a refreshing new sex symbol was born. So much so that a Twitter account dedicated to the star’s ‘awesome rack’ now has more than 11,000 followers. 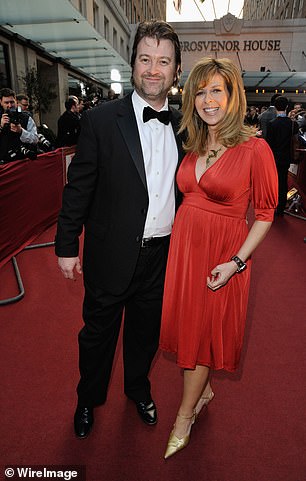 For Derek Draper, Kate’s loyal husband of 14 years, the less said about that, the better.

‘Don’t tell me what that Twitter account is called, because I haven’t seen it and I’m not sure I want to know,’ he grimaces, admitting, with some understatement, that people posting ‘lewd’ close-ups of his wife’s breasts on social media is ‘a weird experience’.

Nonetheless, he’s glad Kate finally dared to bare. ‘I think she looks gorgeous. It shows she’s feeling relaxed and confident,’ he adds, noting that Kate was still wearing a towel around her waist. ‘I still wonder if the full bikini might appear at some point. Maybe, maybe not. But she’s certainly not hiding her assets, right?’

Right. And, frankly, who would if they were as gravity defying as Kate’s?

So, as a fiftysomething mother of two, what on earth is her secret? Her spokesperson tells the Mail that Kate has ‘absolutely’ not had a boob job ‘of any sort’, while Derek adds, almost apologetically: ‘I’m afraid that, much to everyone’s envy, the secret is all in the genes.’

All the same, before entering the jungle, Kate — who found fame as a presenter on GMTV and now hosts ITV’s Good Morning Britain alongside Ben Shephard every Friday — lost more than a stone (reports of a 2st weight loss, Derek says, are over-egged), by giving up sugar and working with a fitness coach for six weeks.

Kate also has a complexion so clear many have speculated she must have smuggled make-up into camp — something Derek strongly disputes.

‘Kate is a very lucky person, in that, in order to look that good at her age, she doesn’t actually have to do that much,’ he says, adding: ‘I think it would be easier to smuggle gold out of Fort Knox than smuggle make-up into that camp. So, no.’ 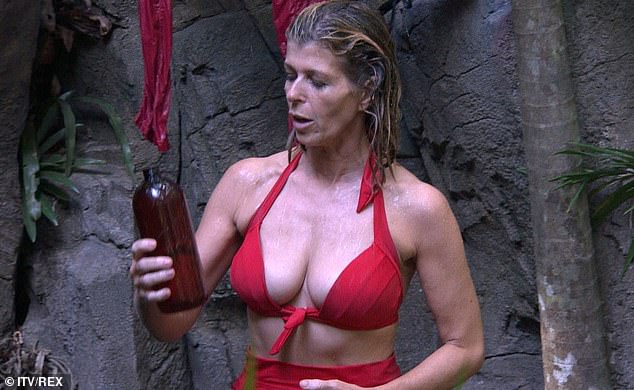 Before she arrived in the jungle last month, 52-year-old Kate Garraway lamented her ‘ordinary’ figure and declared herself ‘very nervous’ at the prospect of revealing it 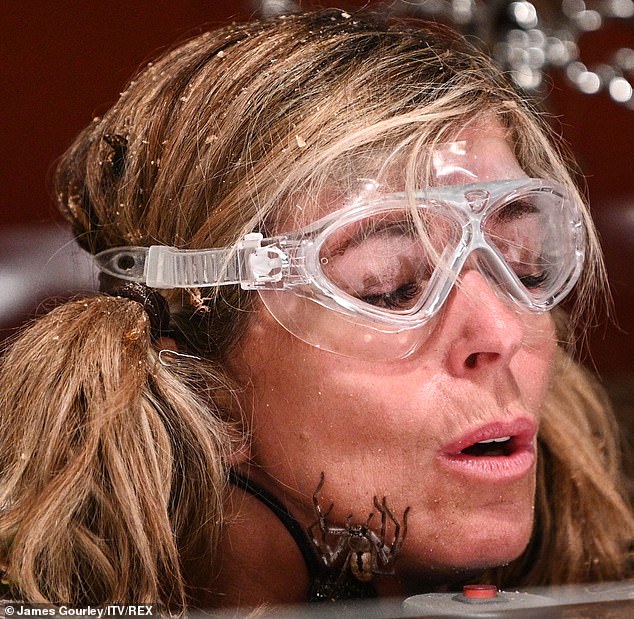 Like most viewers, Derek is watching in wonder as his wife gets better looking the longer she is parted from her beauty products.

‘I’ve never seen her look more attractive,’ he says. ‘I am falling in love with her all over again.’

Derek is speaking exclusively to the Mail from his room at the six-star Palazzo Versace hotel in Queensland, where he and the couple’s children, Darcey, 13, and ten-year-old Bill, arrived last week to support Kate. 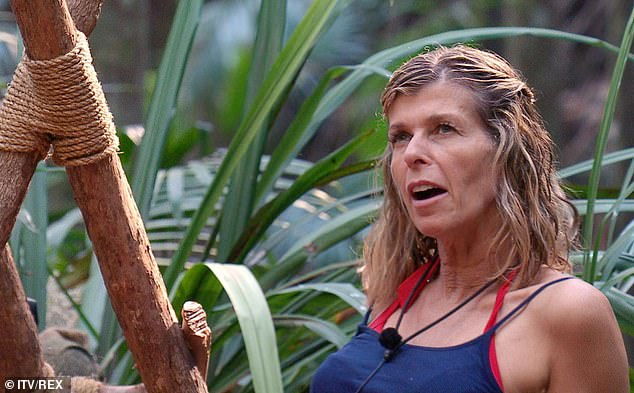 It is a surreal existence. Relatives are woken at 4.30am to be bussed to the camp to watch their nearest and dearest voted off one by one. The final is tomorrow night.

Despite the nerves and lingering jet lag, Derek, 52, can’t keep the pride from his voice. And little wonder. So far, Kate has conquered her fear of heights to walk a plank protruding from Australia’s 32-storey Focus Tower, downed a cocktail of pig brains, and been dunked in a box with thousands of creepy crawlies (one of which, she proclaimed, to daughter Darcey’s acute embarrassment, was perilously close to getting in her ‘noo-noo’).

‘Kate wanted to make it clear that if you’re a woman in your 50s, life can still be full of adventure,’ says Derek. ‘Obviously, not every Mail reader is going to be able to do Bushtucker Trials in the jungle, but actually, Kate would say: ‘What could you do? Why don’t you try to do something different and push yourself?’ That’s what she’d want the message to be.’

Another message is that middle-aged women can prove a magnet for red-blooded millennial men. After fellow contestant Myles Stephenson — who has since been voted off the show — complained of a sore neck, Kate invited the singer to sleep in her bed.

An enraptured Myles said: ‘I can’t turn that one down, definitely not, Kate Garraway in your bed . . .’

Kate, quietly flattered, replied: ‘That’s good to know, because I think when you approach 50, it feels like you’re no longer attractive.’

It was a surreal exchange for Derek to witness. ‘There can’t be much weirder than sitting two metres from Myles’s parents as their 28-year-old son lusts after my 52-year-old wife,’ he says. 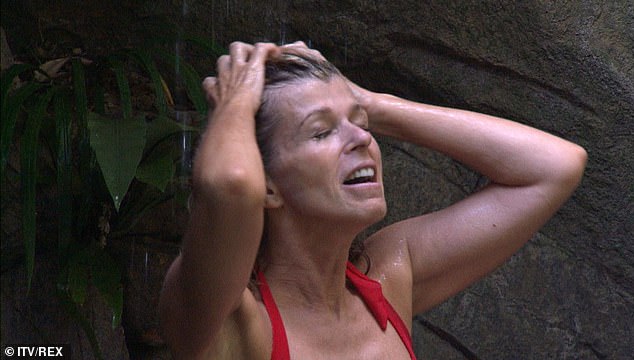 Her husband says: ‘I’ve never seen her look more attractive. I am falling in love with her all over again’ 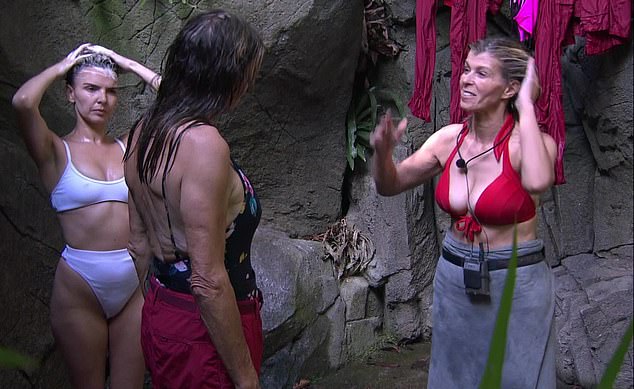 Another message is that middle-aged women can prove a magnet for red-blooded millennial men. Nadine Coyle, Caitlyn Jenner and Kate Garraway clean off in the jungle shower

He describes Myles’s father as a ‘great guy’ with whom he was able to ‘see the funny side’, but admits he was momentarily ‘a little jealous. But then I joked: ‘What’s he got that I haven’t?’ And, at the end of the day, she’s coming home to me. So I win.’ Besides, Kate once admitted, the couple are ‘open about finding other people attractive’, and Derek, too, believes a little healthy competition does their marriage no harm.

‘There’s more chance of your marriage being successful if you can acknowledge that, now and again, you’re going to find someone else attractive, rather than pretend your eyes never stray,’ he explains, adding that although he knows ‘loads’ of men who fancy Kate, she finds it ‘hard to believe’ she could be the object of desire.

Her ability to stay cool during some of the camp’s more volatile moments has also drawn praise. ‘Kate is a classic iron fist in a velvet glove. No one should make the mistake of thinking that underneath that lovely exterior there isn’t a very strong, clever woman.’

Although he and Kate (who married in 2005 after being set up by former GMTV political editor-turned-MP Gloria De Piero) have learned to navigate their differences, Derek is still liable to get the odd look — not least if he questions his wife’s messiness.

Another side of Kate is her thoughtfulness to others. Derek cites the campmates’ dinner when one of the group’s quails fell on the floor. ‘She instantly said: ‘I’ll have that one.’ That’s very much Kate. I’d be like: ‘How can I avoid having that one?’ ‘

It was her determination to do right by others that led Derek to pop the question spontaneously on holiday in Cairo, just four months after they met in 2004. 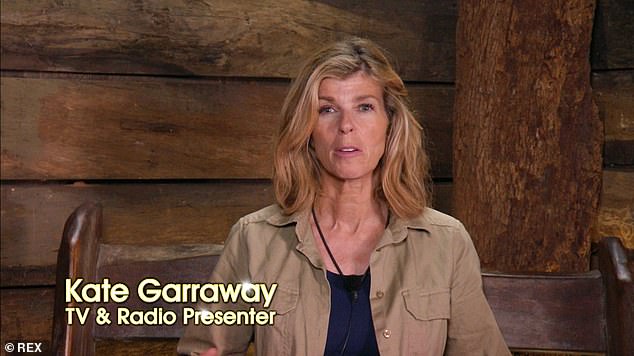 For now, all he can do is wait, and hope, that his wife will not only emerge as a sex symbol and middle-age icon, but Queen of the Jungle, to boot

‘I’m quite a controlling, fussy person, and I’ve been on holidays with girlfriends and it was a nightmare,’ he says. ‘But it was so blissful to be with her, so easy, that I thought: ‘Oh my God, why wouldn’t I want to have this for the rest of my life?’ So I got down on one knee and proposed.’

This is the longest the couple have spent apart, and Derek says: ‘I hope we’ll never spend as long apart again.’

Their children — accompanied in Australia by a tutor — have been thrilled by their mother’s performance. ‘I thought they might have a wobble as it unfolded, but they didn’t. They’re her biggest cheerleaders,’ says Derek.

‘They were both keen in the run-up that Kate would hold creepy crawlies in the garden, even slugs. Darcey was trying to persuade Kate to eat it, but she didn’t.’

But one gets the impression she would, if survival depended on it.

Can Kate win this contest? ‘I obviously feel she should,’ says Derek. ‘She’s tried hard, been brave and a good influence in camp. But who knows?’

For now, all he can do is wait, and hope, that his wife will not only emerge as a sex symbol and middle-age icon, but Queen of the Jungle, to boot.