Village is at war over council’s £100,000 plan to move allotments with plotholders accused of rigging poll against the move by sending in votes from bogus internet addresses in Albania, Australia and Argentina

An online poll to decide on moving a village’s allotment site has been scrapped after suspicious votes flooded in from Russia and around the world.

Organisers claim gardeners opposed to re-locating the plots in Bearsted, Kent, manipulated their IP addresses to repeatedly cast votes against the project.

Bearsted Parish Council’s £100,000 proposal would see the allotments moved, creating more plots, while extending a nearby car park and providing two new tennis courts which would be paid for by Bearsted and Thurnham Lawn Tennis Club.

The number of allotments would be increased from 27 to 48, while toilets and a dementia-friendly and children’s garden would be added at the new site.

But a poll to decide on the idea was taken down within two days after organisers noticed a flood of votes coming in from around the globe.

Opponents of the plan are accused of rigging the poll by using IP addresses from countries such as Russia, Albania, Australia, Bosnia, Brazil, Canada, Argentina, Costa Rica and Cyprus to increase the number of ‘anti’ votes.

The Support Bearsted Community Projects website said within a day of its poll opening, a ‘no’ vote was being submitted every 30 seconds ‘for a sustained period of time’. 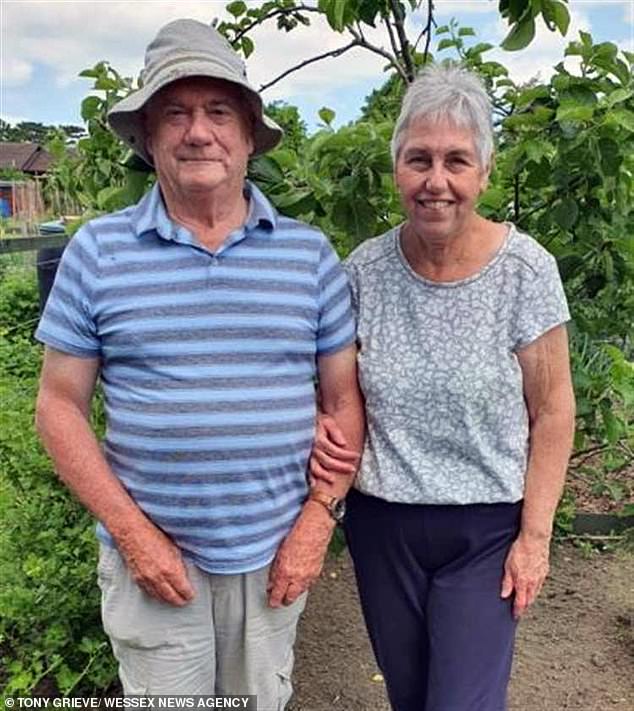 Tony Grieve, 74, said he feels he and another plot holder are under suspicion as they are the only two to publicly oppose the plans (Pictured: Mr Grieve with wife Sandra)

He added that there was ‘hard evidence of it being abused by one or more persistent individuals from the opposing side who have fraudulently manipulated their IP addresses in order to submit large numbers of votes in their favour’.

‘One of the rules we had stipulated was two votes per IP address, so two per household.

‘But all of a sudden, from around 8pm on Monday, “no” votes were pinging through from different IP addresses.

‘They were coming from Australia, Albania and all sorts of places.’

The vote was due to run from Monday last week until August 3.

But it was declared null and void after the IP addresses from around the globe were found to have been used to vote against the scheme, known as Project A.

An IP address is a computer’s unique number that identifies it on the internet.

It can be changed simply by unplugging, and then plugging back in, your router while on an IP-checking website.

There are also so-called VPN applications which can change your computer’s address.

Both sides claim the opposing party has been circulating false information.

Tony Grieve, 74, said he feels he and another plot holder are under suspicion as they are the only two to publicly oppose the plans. 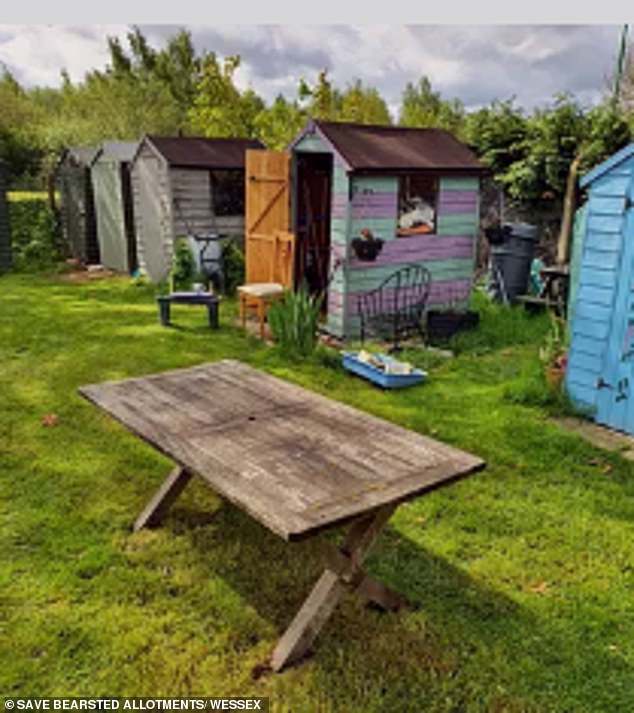 The number of allotments would be increased from 27 to 48, while toilets and a dementia-friendly and children’s gardens would be added at the new site (Pictured: Current allotment site)

Mr Grieve, of Cross Keys, Maidstone, whose wife Sandra joins him tending the fruit and veg on his allotment, said: ‘We know of one plot holder who was away on Spain. She voted which she is quite entitled to do.

‘So that IP will have come from abroad… they have made these allegations, but they have not named names.’

He says he will not keep his plot if the changes go ahead.

He added: ‘If we lost the allotments, that would be it because it is a stressful situation, really.’

When the row first flared in June, Mr Grieve said he and other plot holders had not been properly consulted.

‘Talks would have been going on for months,’ said Mr Grieve, a former member of Bearsted council.

‘When rumours started, we inquired about the plans and it was categorically denied, and then – an hour or so before the announcement was made – we received an email from the council.’

Mr Grieve, who has set up a ‘Save Bearsted Allotments’ Facebook group, added: ‘They are talking about it taking two or three years.

‘But, to be fair, some of the allotment holders are a similar age to me or even older.

‘The council is saying it has got a waiting list of 20 people.

‘But from past experience, people quite often put themselves down for allotments, then change their mind when they realise the amount of work that goes into it.’

Weighing into the row, the Bearsted and Thurnham Society also listed its objections.

It says it ‘has concerns in terms of the threat moving the allotment holders would cause to the environment nearby’.

It said: ‘A large grove of trees occupies approximately 34% of the proposal site and the current scheme would result in the destruction of most of them if the parish council’s objectives were to be achieved. 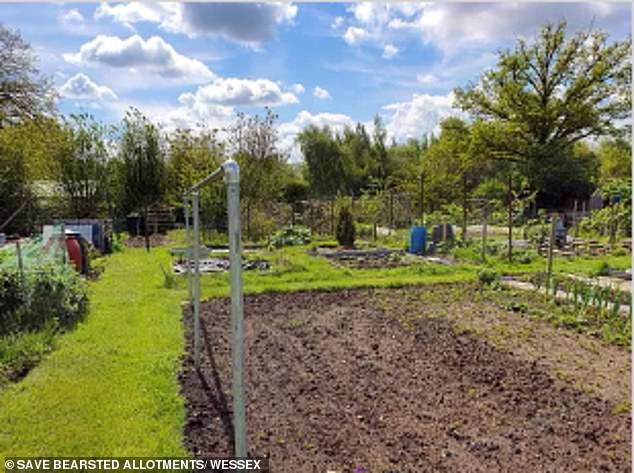 ‘Neither tennis courts nor car parking provide any kind of natural habitat.

‘The society questions whether the loss of some half an acre of woodland, and the wildlife it supports, can be justified.’

Other concerns raised included the challenges getting planning permission to extend the car park would cause and the impact that car park expansion would have on the area.

The society also feels allotment holders, whose gardens date back more than 40 years, were ‘effectively excluded from initial discussions’.

A spokesman for Bearsted Parish Council said: ‘We are still very much at the ideas stage.

‘The idea around the new allotment is to offer more to the parish.

‘There would be a well-being garden. Everyone who is living with any sort of condition will be able to go somewhere where there is no traffic for some space.’

‘Over the past few years, a lack of allotment plots available to residents, inadequate parking near to Church Landway, a lack of public toilets and the requirement for more lighting in the area have been raised as some key issues that need addressing’.

It accepted ‘not all issues will be resolved’ but it will ‘look to find solutions wherever possible’.

A spokeman previously said in June: ‘Project A is at the very early stages, an outline of the project was put together but this by no means reflects a final design.

‘The design process will not commence until the public consultation is complete, which is August 3.

‘The vast majority of feedback that the council has received is very positive and in favour of the improved facilities. 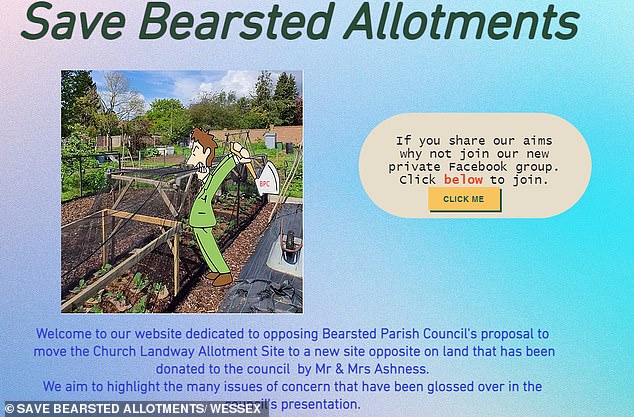 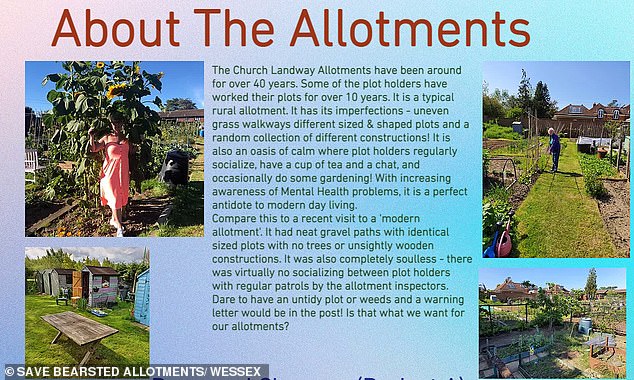 ‘There are some concerned allotment holders and the council is committed to work with the newly-formed allotment working group to take their ideas and practical advice to make a new allotment garden a huge asset to the parish and the parishioners that have a plot within.

‘Sadly, there is a lot of statements circulating about “Project A” that are totally unfounded, factually incorrect and untrue.

‘The council asks that those that have any questions about “Project A” come directly to us, so that we can ensure that only correct information is shared.’

Kim Martin, 64, the captain of Bearsted and Thurnham Lawn Tennis Club, has welcomed the proposal, saying: ‘We are really pleased. I think what they have come up with is absolutely excellent.

‘Two extra courts would be really good. At the moment, we could have four courts just being used by the youngsters.

‘I like to see the youngsters coming in because they don’t get as much exercise at school any more as I got when I was at school.’

He said ‘some of the facts being circulated by those who object to the plans are inaccurate’, with a website and Twitter account having been set up, as well as the allotment Facebook page.

He added: ‘Take away the fact I’m club captain of the tennis club, I just think it is great for the whole community.

‘One or two allotment holders are a bit unhappy but I think it’s a win-win situation for everybody.

‘Some people just don’t like change. That’s the way of the world.

Denis Spooner (Con), Maidstone Borough Council’s Bearsted ward representative, said: ‘I have an open mind to the proposal but I do have serious concerns about the way it has been handled by the parish council.’