The girlfriend of a man who was shot dead in his own home by his former partner’s husband has told a trial how the shooter also pointed his firearm at her – and pulled the trigger.

During a fatal struggle at Michael Caposiena’s home in Westmeadows, in Melbourne’s northern suburbs, on March 12, 2016, Caposiena stabbed Glen Cassidy with a kitchen knife before Cassidy shot Caposiena in the head. Both men died at the scene. 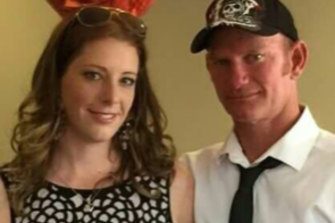 Cassidy’s widow, Biannca Edmunds, who was in Shepparton at the time of the men’s deaths, is on trial in the Supreme Court for the murder of Caposiena, who was the father of her son.

Edmunds, 36, has pleaded not guilty to the murder charge and denies prosecution allegations that she goaded Cassidy into carrying out the attack, helped him plan it, drew him a map and provided the gun.

Caposiena’s girlfriend, Silvana Silva, told the Supreme Court on Wednesday they were watching television in the lounge when she looked out of a window and saw Cassidy in the street, and she “froze because I remember him from [custody hearings in] court”.

She said she told Caposiena that Cassidy was outside, but he replied that she was “paranoid”. But about 10 minutes later, Cassidy approached their home and knocked on the door. By that stage Caposiena had armed himself with the knife.

Silva said she heard Caposiena tell the visitor through the security door: “I’m sorry, but I can’t do anything for you, I’m sorry I can’t help you with that.” She also heard Cassidy ask to shake Caposiena’s hand.

When Caposiena opened the security door, Silva said, Cassidy pushed him inside and the two men struggled for a few seconds. She said it was at that point she saw Cassidy had a gun.

“The only thing I could see was the gun pointed towards Michael’s head. Then I heard the bang,” she said in tears as she gave evidence.

Silva said after the shot, she rushed to the door to scream to neighbours for help and Cassidy faced her.

“That was when he pointed the gun towards my head as well and pulled the trigger as well,” she said. She told the trial she heard a “clack” noise, like in movies when a gun failed to fire.

“But it didn’t work because I am not sure if the gun was fully loaded. So then he started assaulting me.”

Silva said Cassidy repeatedly hit her head into a step on the front porch, until she heard another voice telling her to go inside and that the gunman was being held. She was treated for cuts and bruises in hospital.

Under cross-examination by Edmunds’ barrister, Silva said she didn’t see any movement by her boyfriend consistent with him stabbing Cassidy.

“No. I only had eyes to the gun. I was petrified when I saw the gun,” she said.

Silva said after the shooting she had to pay $370,000 out of Caposiena’s estate to Edmunds, when the other woman successfully sued for money for her son.