Waco, Texas: Dan Vasquez used to push the lever on the gas chamber, or the "coughing box", as it was known on death row. As California's state executioner, he stared into the eyes of condemned men while they passed to the next world.

"They try to hold their breath, but it seeps in through the pores," he says. "It takes seven seconds. The head rolls forward, and then they flatline. One told me 'Everyone will dance with the grim reaper'." 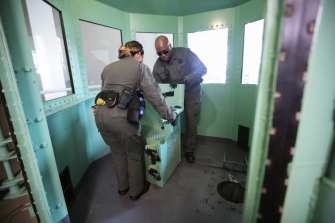 It is 25 years since Vasquez, now retired, poisoned someone with hydrogen cyanide. He is still a supporter of the death penalty. But even he now admits its days are probably numbered.

"Does it stop murders? No. Is it a deterrent? No," he said. "If the politicians get more votes by opposing it, then they're going to do that. Maybe it will be abolished."

Across America in 2019, that is exactly what is happening. Last week, New Hampshire became the latest state to repeal its death penalty in what campaigners hailed as a watershed moment.

It means 25 – half of the 50 – US states have now abandoned capital punishment, or imposed an official moratorium. A dozen others have not executed anyone for over a decade.

In Concord, the New Hampshire capital, there were emotional scenes in the legislature as Susan Ticehurst, a Democrat representative, spoke about an ancestor who was hanged after the Salem witch trials in 1692. That had been seen as a "fair trial", she said.

But perhaps the most notable aspect was that the New Hampshire decision only passed with some Republican support. A dozen states are now considering anti-death penalty legislation sponsored by Republicans, traditionally the strongest supporters of the measure.

"I think there is a real zeitgeist moment happening now," said Hannah Cox, national manager of Conservatives Concerned About the Death Penalty. "It's partly to do with the information age, and the popularity of the true crime genre in podcasts and on Netflix. They're looking at individual cases, and people are seeing how the criminal justice system functions. And it's not how our founders intended. There's a lot of eye opening."

In addition, conservatives are increasingly having to square the circle of opposing abortion, while supporting executions.

"There is a contradiction," said Cox. "I'm pro-life and you have to have a consistent world view. A lot of people in the pro-life movement are realising that. However, we are still seeing a lot of inconsistency, for example in Alabama." 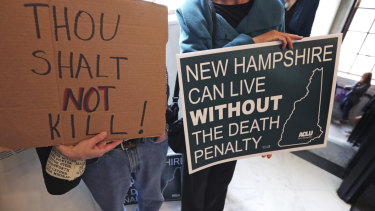 Protestors make their case ahead of the vote in New Hampshire. which has become the latest state to abolish the death penalty.Credit:AP

The repeal in New Hampshire came two months after California imposed an indefinite moratorium on executions. In America's most populous state, which has by far the biggest death row in the country with 737 condemned prisoners, support for capital punishment is down to 31 per cent.

National opinion polls still show just over 50 per cent support for the death penalty, but there has been a steady and precipitous drop from a high of 80 per cent in the mid-1990s.

The number of executions carried out in the US has fallen consistently since 1999, when there were 98. So far this year there have been only nine.

The issue, long dormant on the national political stage, now looks set to feature prominently in the 2020 White House race.

Democrat presidential candidates used to have little hope of winning unless they firmly backed the death penalty. Even in 2016, Hillary Clinton did so. But the overwhelming majority of the 23-strong Democrat field in 2020 have lined up to condemn it.

Kamala Harris, a former prosecutor, calls it "immoral, discriminatory, and ineffective". Bernie Sanders tells audiences the "government should not be part of killing." A notable exception is Joe Biden, who is set to come under sustained attack from other Democrat candidates for his 1994 crime bill which extended use of the death penalty.

"The politics of death has changed in recent years," said John Blume, director of the Cornell Death Penalty Project. "It's become much more acceptable for Democrats, and even Republicans, to say the death penalty is just another misused government programme.

"New Hampshire was really, really significant. The death penalty will shortly be down to its core in the Deep South. It's been a remarkable turn of events and you can see the finish line. It could end in my lifetime."

According to Amnesty, 143 countries now have no death penalty. By numbers of executions, the US is the only Western nation in the top 10.

International pressure for it to abolish capital punishment is intensifying. The UK Government has been lobbying heavily on behalf of Linda Carty, the only British citizen on death row in America.

A total of 165 people sentenced to death in the US over the last four decades have now been exonerated, pardoned, or had charges dropped.

This year the US Supreme Court became engaged in an open civil war over the issue. It is believed four of the nine current Supreme Court justices would vote to declare the death penalty unconstitutional.

However, Donald Trump's appointment of the conservative justice Brett Kavanaugh protected a 5-4 majority in favour. Trump himself is strongly in favour of the death penalty.

However, its opponents believe that Trump will not be able to hold back the tide. Only 62 of America's 2643 condemned prisoners are on federal death row. The fate of the rest, the vast majority, is in the hands of the states, and many of them seem increasingly reluctant to carry out the ultimate punishment.