Labour’s election campaign has suffered another heavy blow as former home secretary David Blunkett said the ‘anti-Semitism’ and ‘thuggery’ in the party makes him ‘despair’ – arguing their best hope is now for a hung parliament.

Lord Blunkett, who was an MP for 28 years and now sits as a Labour peer in the upper chamber, said the likelihood of Jeremy Corbyn winning a majority was ‘extraordinarily slim’.

But he urged moderates within the party to ‘stay and fight’ to ensure the ‘voice of reason’ prevailed, following deputy leader Tom Watson’s decision to stand down.

The former Cabinet minister and party chairman’s comments came after a bruising week for the party which has seen two of its former MPs urge voters to back the Tories instead. 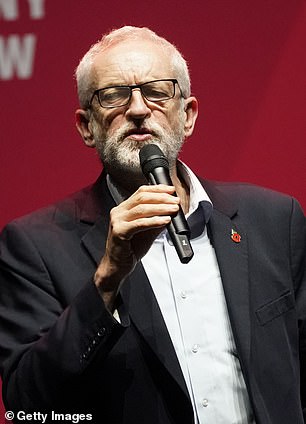 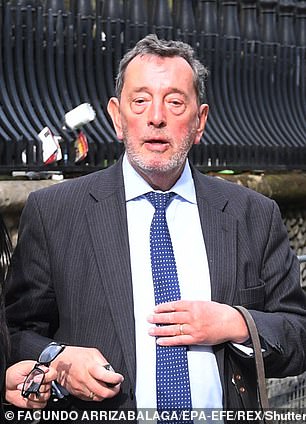 Lord Blunkett (right), who was an MP for 28 years and now sits as a Labour peer in the upper chamber, said the likelihood of Jeremy Corbyn (left) winning a majority was ‘extraordinarily slim’

Ian Austin and John Woodcock said they would be supporting the Conservatives as they did not believe Mr Corbyn was fit to be in Number 10.

And on Friday, Dame Margaret Hodge – one of the most prominent Jewish figures in Labour – declined to endorse the Opposition leader as prime minister.

Writing in the Telegraph, Lord Blunkett said: ‘The behaviour of the hard-Left within the Labour Party – the anti-Semitism, the thuggery, the irrational views on security and international issues, and the lack of realisation that you have to embrace a big tent of people in order to win – certainly makes me despair.

‘But it also makes the likelihood of an all-out Labour majority in this general election extraordinarily slim. The political landscape right now is completely different to what the hard-Left would have you believe.

‘We are in a 1983 situation here, not a 2017 one – with not only the Lib Dems and the Greens, but the Brexit Party, the Tories and the SNP all seriously vying for traditional Labour votes.’

The 1983 election saw Margaret Thatcher’s Conservative Party secure a sizeable majority after votes for the opposition were split between Labour and the Liberal/SDP Alliance.

His intervention comes after another Labour candidate stepped down after allegedly making an anti-Semitic remark.

Gideon Bull, the prospective parliamentary candidate for Clacton, apologised after a Jewish councillor complained about a reference he made to ‘Shylock’ – the Jewish moneylender in Shakespeare’s The Merchant Of Venice. 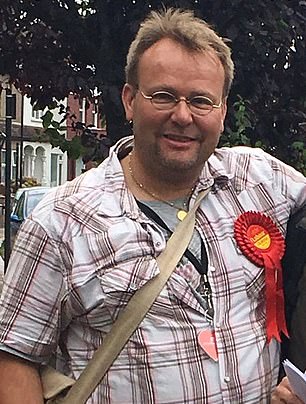 Gideon Bull (pictured), the prospective parliamentary candidate for Clacton, apologised after a Jewish councillor complained about a reference he made to ‘Shylock’ – the Jewish moneylender in Shakespeare’s The Merchant Of Venice

Meanwhile, Boris Johnson came under fire after he suggested his Brexit agreement was a ‘great deal’ for Northern Ireland as it would retain access to the EU single market and maintain freedom of movement.

In the space of 24 hours, three have been forced to quit while nine others came under pressure to step down after controversial remarks they had made in the past were exposed.

The row is highly embarrassing for leader Jeremy Corbyn at the end of the first week of the election campaign.

In total, a dozen Labour candidates have faced controversy in the past seven days.

In a day of disaster for the party, one candidate was forced to quit after allegedly referring to a Jewish councillor as Shylock.

Another came under pressure to stand down after sharing misogynistic posts about female politicians.

A third has been accused of defending her adviser who wrote about a ‘Jewish final solution’ by suggesting that ‘the context somewhat excuses the remarks’.

But a Labour source said: ‘We’ve conducted extensive due diligence checks on candidates and we have taken swift and robust action where necessary.

‘In a snap general election hundreds of candidates have to be immediately selected and staff have worked incredibly hard to conduct due diligence in time.’

The news comes as a new YouGov poll has shown that support for Labour is collapsing across the country, with the Conservatives taking the lead in the traditionally leave-voting heartlands.

Support for his party has plummeted by 25 points in the North West to 30 per cent, giving the Conservatives a narrow three point lead, according to the latest YouGov poll of 11,500 voters. 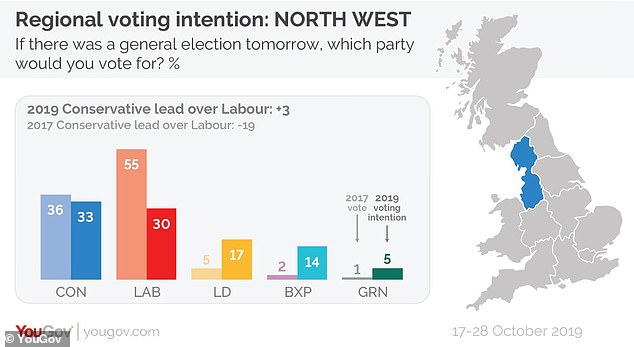 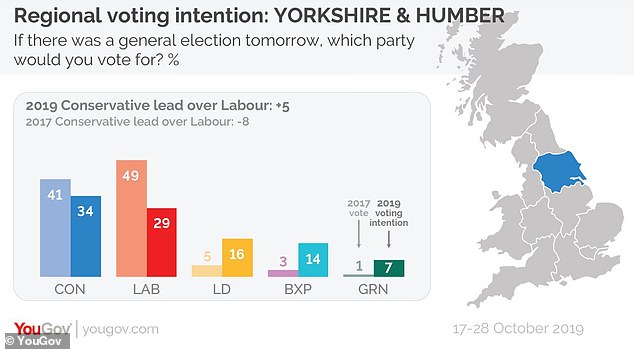 In Yorkshire and Humberside, the predicted Labour vote share is now just 29 per cent, compared to 49 per cent in 2017 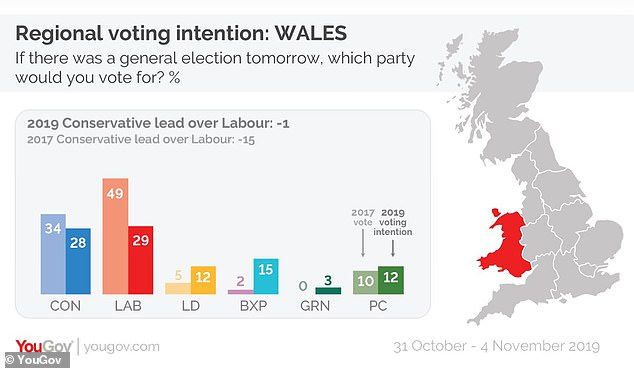 In Wales, Labour support has plummeted from 49 per cent to 29 per cent, leaving them just one point ahead of the Conservatives on 28 per cent

In Yorkshire the same pattern has handed the Tories a five-point lead, giving Boris Johnson’s party a lead in every English region apart from London and the North East, despite support for both main parties dropping across the country with more than a month to go until the vote.

In Yorkshire and Humberside, the predicted Labour vote share is now just 29 per cent, compared to 49 per cent in 2017.

In Wales, Labour support has plummeted from 49 per cent to 29 per cent, leaving them just one point ahead of the Conservatives on 28 per cent.

In London, which voted heavily to Remain, the Lib Dems gained a ten-point boost to 19 per cent, while Labour remain the largest party on 39 per cent despite a 16-point drop since 2017.

The figures will come as a boost for Mr Johnson, whose party now leads the polls in former Labour heartlands. 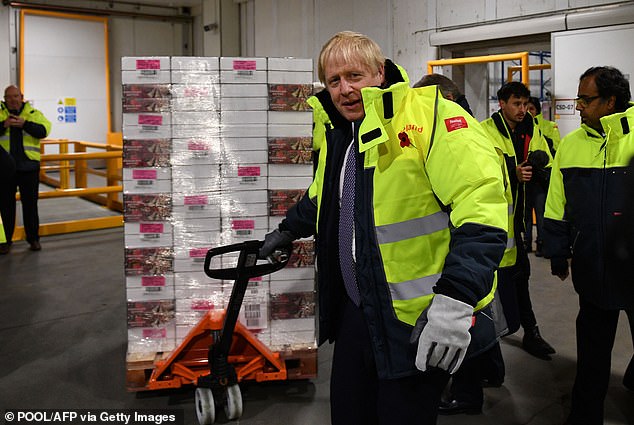 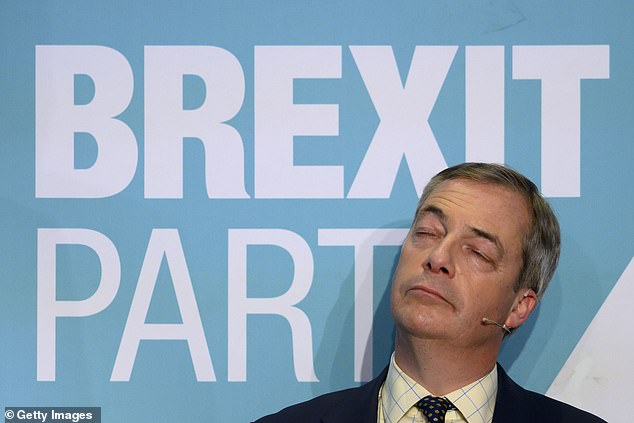 However, many Tories fear that with the Brexit party surging, Mr Johnson could still be deprived of an outright majority – leaving Mr Corbyn to form a coalition that would overturn Brexit.

The poll shows that the Brexit Party presents a serious threat to Mr Johnson’s hopes.

Although Labour support is collapsing across the country, the Brexit party is polling as high as 19 per cent in some regions.

Friday’s new YouGov poll findings showed the Brexit party is recording high poll ratings in a string of regions across the country.

In the North East, the Brexit party is currently polling on 19 per cent, up from the 4 per cent that the UKIP party recorded at the 2017 general election.

At the same time, the current predicted Tory vote share has fallen in every region since the 2017 election result.

The poll is most disastrous for Labour, with the party’s support collapsing across the country.