Home » World News » L&G: All FTSE 100 companies must have at least one BAME board member

L&G: All FTSE 100 companies must have at least one BAME board member Legal & General demands ALL FTSE 100 companies must have at least one board member from black, Asian or ethnic minority background by start of 2022

All FTSE 100 companies have been urged by a major financial services firm to hire an ethnic minority director by 2022 following the Black Lives Matter protests.

Institutional investor Legal & General has told the 30-plus firms with all-white boards that it will vote against them unless they hire a BAME board member.

L&G, which manages £1.2 trillion of assets for pension funds and other clients, gave the ultimatum in writing to all FTSE 100 companies and the US firms in the S&P 500. 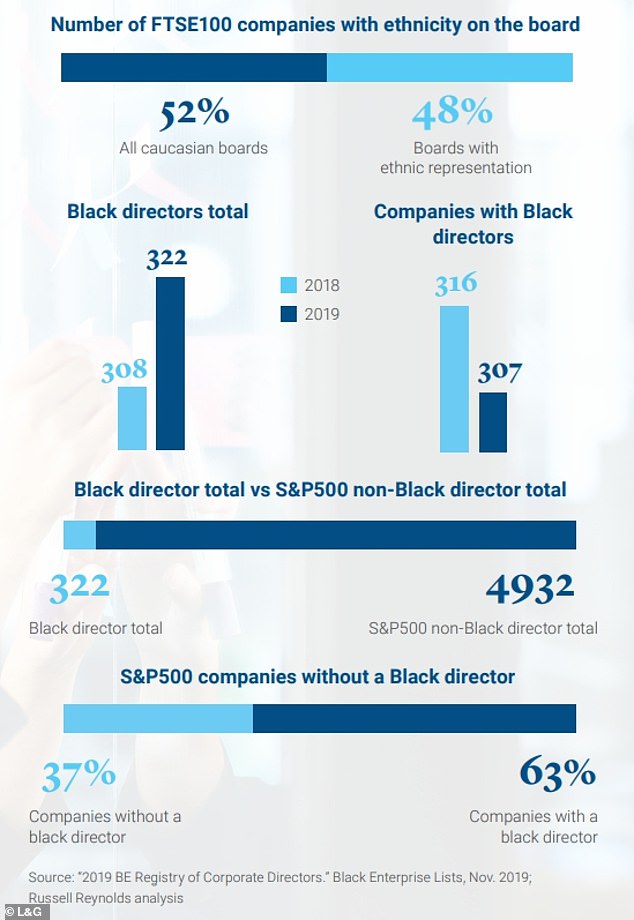 It said it will otherwise vote against the re-election of the firm’s chairman of the nomination committee, which is the main board panel making board appointments.

In a publication on diversity, reported today in The Times, L&G said: ‘The horrifying killing of George Floyd and so many others has led many institutional investors to think much more seriously about structural racism and inequality. 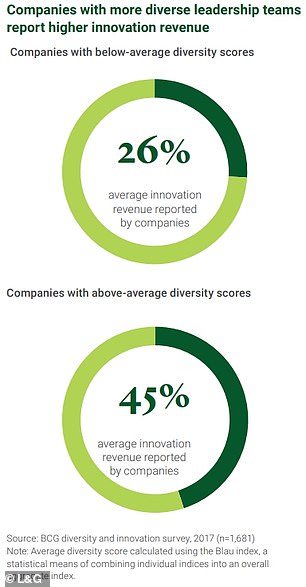 ‘At LGIM (L&G Investment Management), we believe asset managers must go further – now is the time for action.

‘We have been longstanding advocates for cognitive diversity in the companies in which we invest, and have spent a lot of time improving the gender balance of those companies, through both engagement and voting, with great success in the UK and in the US.’

The report added: ‘Our expectation is that companies set ambitions related to the ethnic composition of their organisation, throughout the workforce, with a particular emphasis at the board level, which generally sets the tone from the top.

‘For companies that fail to meet our transparent and rules-based minimum expectations, there will be voting and investment consequences.’

A study from the Parker Review in February, three months before the BLM protests began, found there were 37 FTSE 100 companies with no BAME directors.

However some companies including the Royal Bank of Scotland are known to have since made BAME appointments to their board. 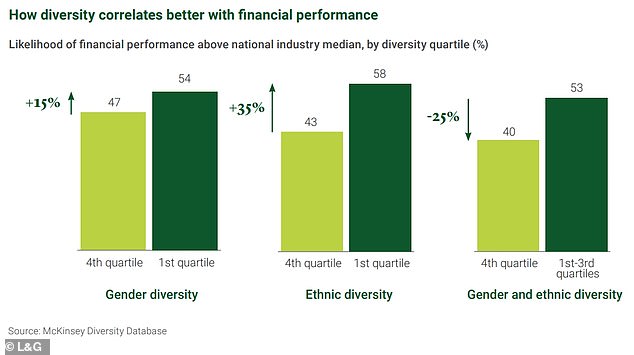 Black man Mr Floyd died on May 25 after a police officer knelt on his neck for nearly nine minutes in Minneapolis – sparking widespread protests across the world.

Last month, a separate report named supermarket giants and retailers as being among the worst offenders when it comes to hiring women on their boards.

Despite having a workforce that can be made up predominantly of women on the shop floor, a smaller percentage of women were found to be at the top table at Morrisons and Primark-owner Associated British Foods than at other major firms.

Ocado, BT, the London Stock Exchange Group and Bunzl were among other FTSE 350 companies named in the research from Cranfield University. 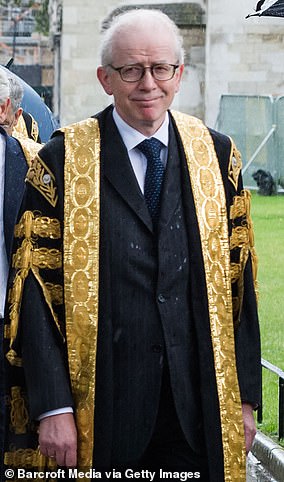 The president of the Supreme Court hopes to see a justice from an ethnic minority background among the 12-strong body in the coming years.

Lord Reed, who became a justice in the court in February 2012 and succeeded Lady Hale as president in January, said a lack of diversity among justices is a situation which ‘cannot be allowed to become shameful if it persists’.

The court is the final court of appeal in the UK for civil cases and for criminal cases in England, Wales and Northern Ireland, and all 12 current justices are white and only two are women.

Asked when a justice of black, Asian or minority ethnic background will be appointed, Lord Reed told the BBC: ‘I hope that will be before I retire, which is in six years’ time.’

Justices are appointed by the Queen on the advice of the Prime Minister following a recommendation from a selection commission on which, as president of the court, Lord Reed would sit.

Lord Reed was also asked about the case of Alexandra Wilson – a black barrister who was mistaken for a defendant three times in one day.

The criminal and family barrister tweeted that she was ‘absolutely exhausted’ after staff at the court repeatedly failed to recognise that she worked in the legal profession last month.

Lord Reed called the incident ‘appalling’, adding: ‘Alexandra Wilson is a very gifted young lawyer, an Oxford graduate who has won umpteen scholarships, and for her to be treated like that was extremely disappointing to say the least.’

Meanwhile, he also challenged accusations of judicial activism which followed in the wake of the Supreme Court ruling that Prime Minister Boris Johnson’s decision to suspend Parliament was unlawful.

Lord Reed told the broadcaster: ‘What we are doing isn’t activism, it’s giving effect to the law.’

He said it was ‘unfortunate’ that the Home Office had referred to lawyers taking on asylum cases as ‘lawyer activists’ in a video posted on Twitter in August.

‘There’s no question of people being activist simply because they’re doing their job, to see that their clients aren’t treated unlawfully and receive the treatment they’re entitled to by law,’ he said.

‘It’s important that people are careful in the language that they use.’