Three teens who repeatedly stabbed gang rival, 18, in his EYE during brutal machete attack on busy train to steal his e-scooter are jailed for total of 18 years – as victim is left blind in one eye

Three teenagers who repeatedly stabbed a rival gang member on a busy train leaving him permanently blind in one eye have been jailed for a total of 18 years.

Two men and a boy, who was 14 at the time, launched a vicious machete attack and stole their teenage victim’s electric scooter.

Jaheim Smith-Williams, Gabriel Burke-Georgiou, both 18, and a now 15-year-old boy who cannot be named for legal reasons attacked the man in front of shocked passengers on a train in Tottenham, north London.

The 18-year-old victim was sitting with his electric scooter propped up next to him on a northbound train as it left Northumberland Park station just after 7pm last September 24.

All three defendants appeared at the Old Bailey where they pleaded guilty to wounding with intent to cause grievous bodily harm.

At the same court on Friday, a judge sentenced them to a combined 18 years in jail. 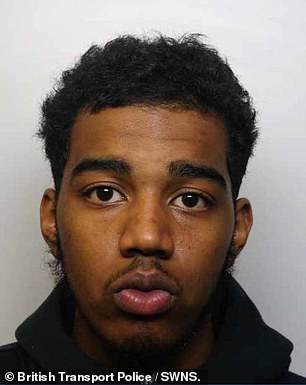 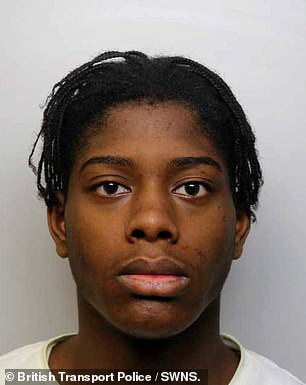 Gabriel Burke-Georgiou (left) attacked the man in front of shocked passengers on a train in Tottenham, north London last September. Jaheim Smith-Williams (right), along with Burke-Georgiou and one other, who cannot be named for legal reasons, have been jailed

Passengers sitting nearby quickly got up and left the carriage to get away from the sudden attack, blocking the then 14-year-old boy from joining the assault.

The 14-year-old then pulled out a long-bladed machete, ran towards the victim and joined the attack.

The victim was forced backwards down the carriage as Smith-Williams hit him with the knife several more times leaving the victim on the floor with his hand over his left eye.

The teenage victim and three suspects knew each other and were linked to rival gangs, police said. 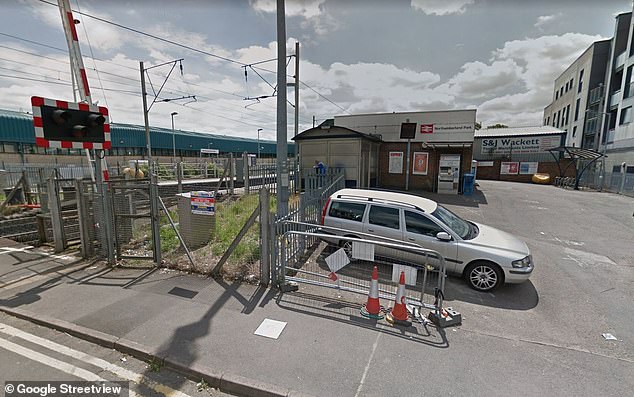 After the attack, the stricken man also managed to leave the train at Meridian Water station and was found collapsed outside a supermarket opposite the station before paramedics were called and he was rushed to hospital.

He suffered stab wounds to the back of his right shoulder and head, a severe injury to his hand and lost his left eye as a result of the attack.

The knives used in the incident were found by British Transport Police (BTP) officers in the area around Meridian Water station the next day.

Smith-Williams, from Spitalfields, east London, and Burke-Georgiou, from Tottenham, were both sentenced to six years and nine months in prison and the now 15-year-old was handed a term of five years and one month inside.

BTP Detective Constable Nick Barr described it as a ‘vicious’ attack, adding that the victim was left with life-changing injuries.

He said: ‘This was a premeditated and vicious attack on-board a busy train which left the victim with life-changing injuries.

‘It was incredibly distressing for witnessing passengers and I would like to thank those witnesses for assisting our investigation and bringing those responsible to justice.

‘Thankfully, incidents like this are rare on the railway, but you can help us by reporting anything or anyone suspicious to us by text on 61016. In an emergency, always call 999.’