M25 looks busier by the day

Has Britain already gone back to work? Roads, trains and Tubes appear busier while weekend traffic was highest of lockdown so far as building sites, cafes and now B&Q quiet reopen doors

Pockets of Britain appear to be slowly returning to normal as traffic on the road increases, cafes reopen and shops resume trading as pressure grows for an exit plan from the lockdown ravaging the economy.

Pictures taken from the M25, M5 and M4 today show a notably busier picture than in recent days, with a steady stream of cars and vans suggesting some motorists who are not key workers may be flouting lockdown rules.

This comes as fast-food giants KFC and Burger King, as well as high street coffee chain Pret, gradually reopen stores across the UK.

Some B&Q stores have also resumed trading after the DIY retailer carried out a trial reopening of 14 stores at the weekend, saying it was in a position to ‘follow best practice’ after seeing how other essential retailers have ‘supported social distancing in their stores’. 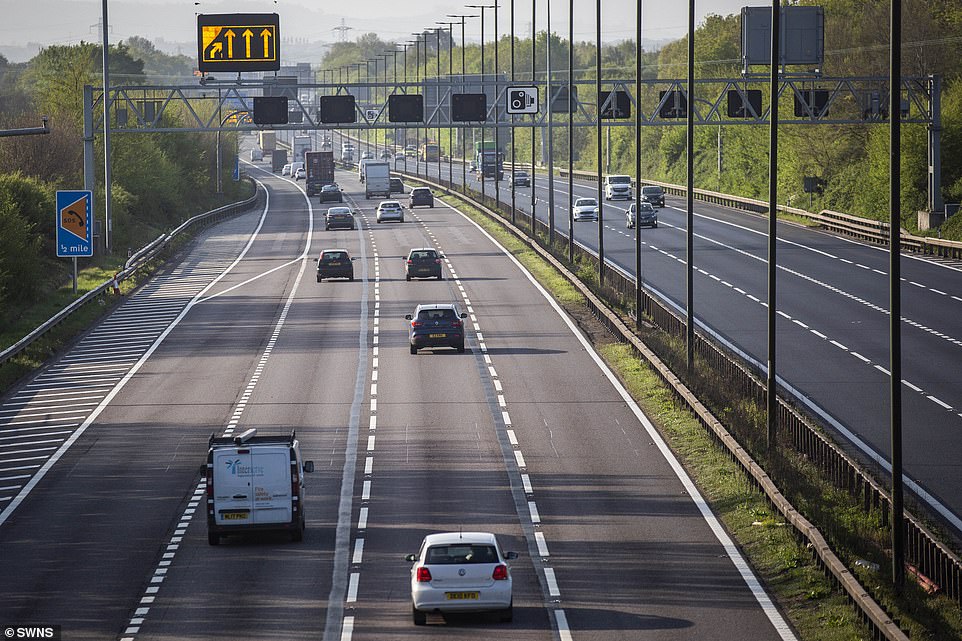 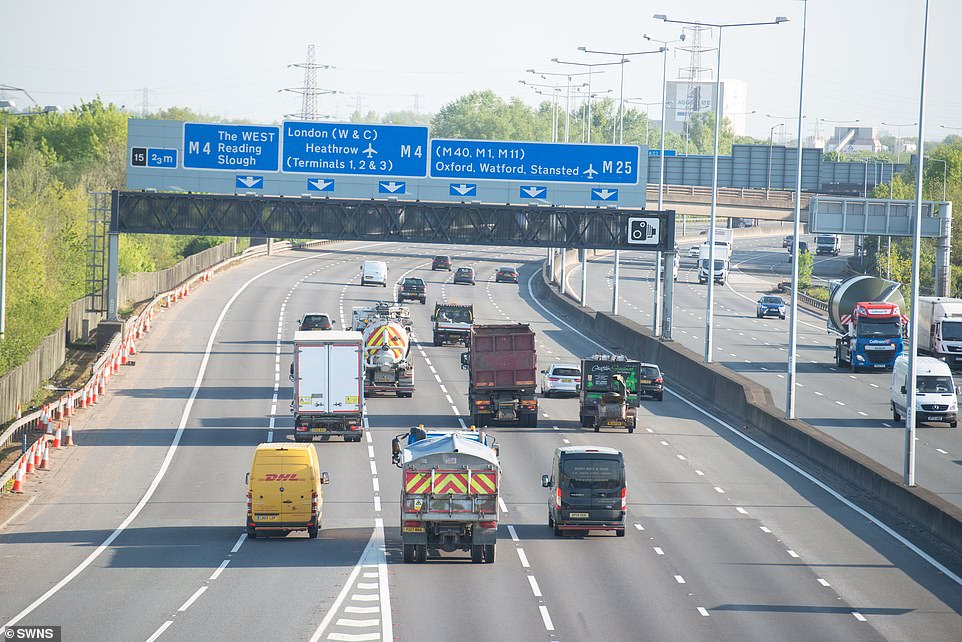 The M25 was notably busier than in recent days this morning, with a number of vans and cars on the road 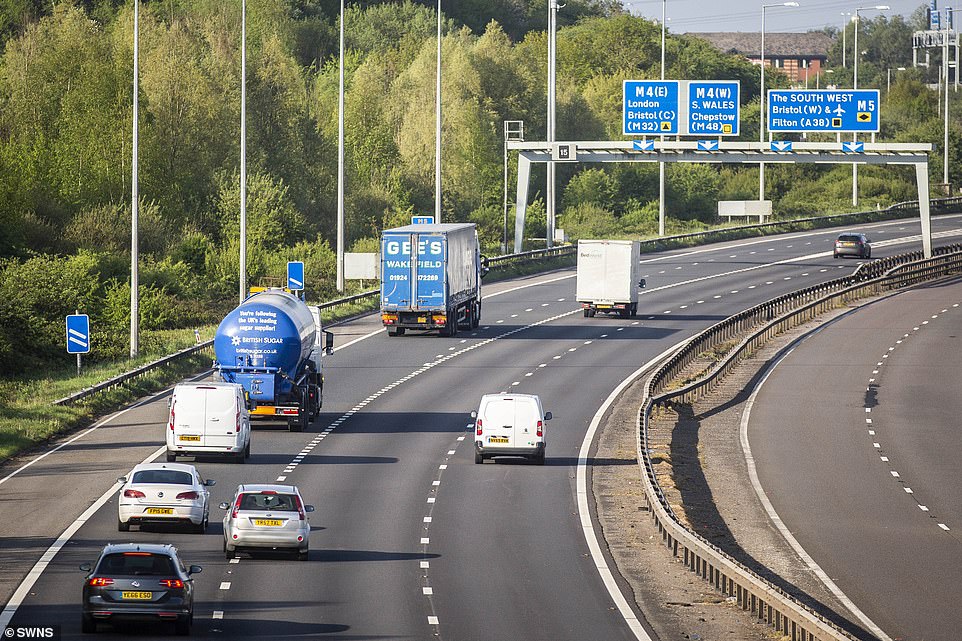 The M5 going into Bristol was busier than in recent days, suggesting some could be flouting lockdown rules 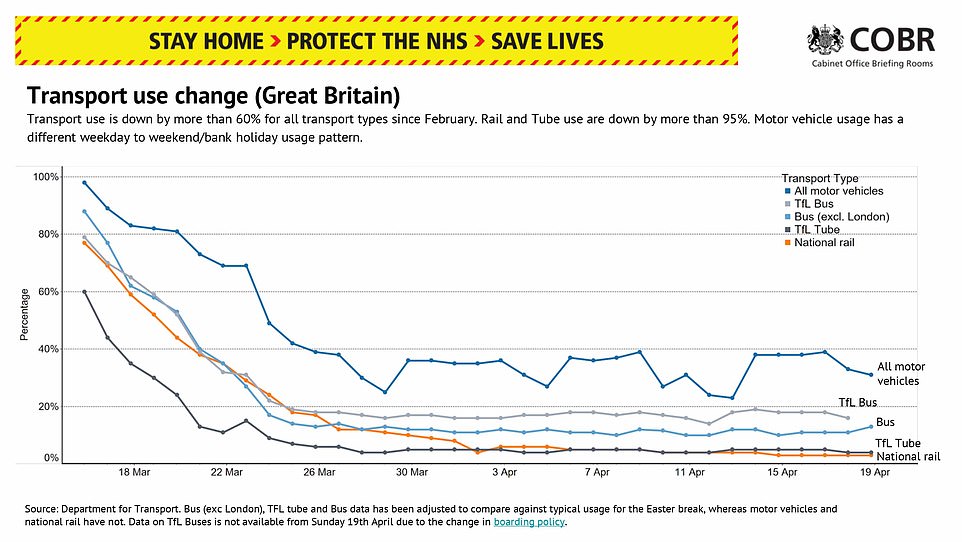 Nando’s has reopened the kitchens in some of its restaurants to help feed NHS workers.

The peri-peri chicken chain said seven of its city centre restaurants reopened their kitchens on Monday, after the chain shut all its sites in the face of the pandemic last month.

Four restaurants in London, two in Manchester and one in Dublin are firing up their grills again to make meals for NHS workers and local charities.

The business said it will provide up to 1,700 free meals each day for NHS staff, key workers at local hospitals and charities.

It said the restaurants will operate behind closed doors, with meals dropped off at hospitals every evening between 6pm and 9pm.

Each restaurant will work under strict health and safety measures while maintaining social distancing, the chain said.

The restaurants will each look to cook up to 250 meals a shift before delivering them.

It will be the first time the group has reopened kitchens since it shut its sites on March 23 following the Government-mandated shutdown of restaurants, pubs and venues.

Last week, Burger King, KFC and Pret became some of the first chains to announce they would reopen some stores for takeaway and delivery.

Burger King has reopened four restaurants including two in Bristol, one in Coventry, and one in Swindon.

Despite only offering 30 per cent of the regular menu, the chain is already doing a roaring trade with one branch doing a week’s worth of orders in just four days.

It is operating with a pared-down menu and offering delivery on the apps JustEat and Deliveroo.

Pret will open near hospitals and GP surgeries for takeaway services only, adding the decision was made following requests from local NHS workers and hospitals. It will be giving NHS workers 50 per cent off until the end of April.

A total of 160 staff have volunteered to work at the reopened stores and all have undergone checks to ensure they are healthy, the company said.

Nando’s has also reopened the kitchens in some of its restaurants to help feed NHS workers.

KFC is reopening 11 of its restaurants, for delivery only, with staff volunteering to work. The restaurants are in Aldershot, Birmingham, Glasgow, Ipswich, London, Manchester, Portsmouth, Stockport, and Tamworth.

Vehicle numbers plummeted as soon as Britain was put on lockdown on March 23, with police issuing fines to anyone caught making non-essential journeys.

Since then, Sundays have consistently seen the least traffic, with Easter Sunday (April 12) being the lowest at just over 20 per cent of pre-lockdown levels.

But last Sunday (April 19) the figures shot up again to just over 30 per cent – the highest they have been on a Sunday since social distancing began.

The Government data could suggest motorists are tiring of coronavirus restrictions and deciding to get in their cars anyway.

Despite children not being in school, the end of the Easter holidays on Sunday could have contributed to the rise in cars on the roads.

The unexpected hot weather across Britain on April 19 could have also been behind the spike in numbers, with families flocking to nearby parks and beauty spots.

Police are issuing fixed penalty charges to anyone they consider to be away from their homes without good reason, with £60 for a first offence and £120 for a second.

He said: ‘It is important that we continue to monitor the extent to which the British people are following the social distancing advice and in the case of this graph, not travelling.

‘You can see a very clear prolongation of these low trends of usage compared to where we were in the middle of March.’

He said car levels consistently falling below 40 per cent of February levels were a ‘good sign’ and would contribute to beating the virus. 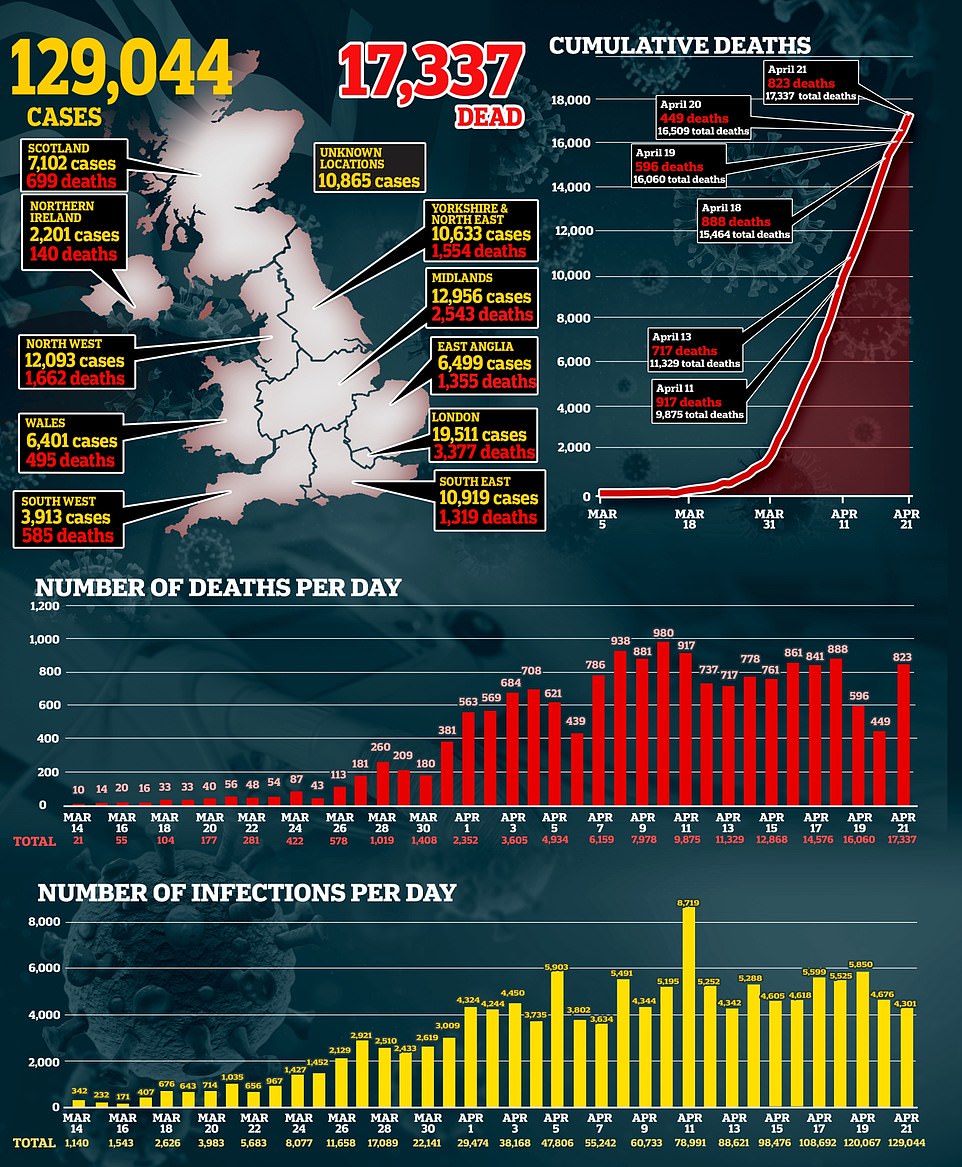 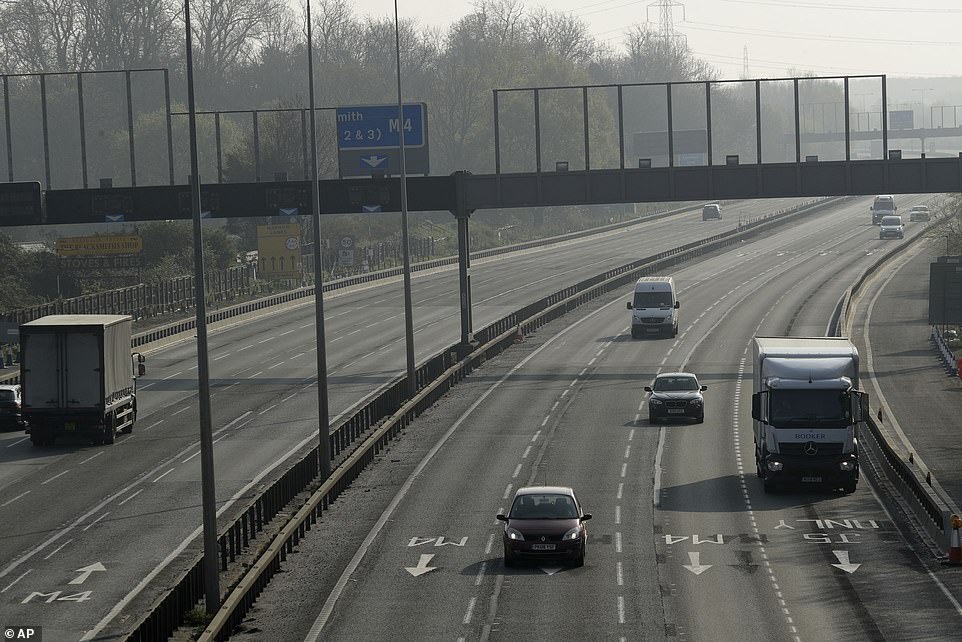 Vehicle numbers plummeted as soon as Britain was put on lockdown on March 23, with police issuing fines to anyone caught making non-essential journeys. Pictured: traffic sparse on the M4 near London over the Easter weekend

But Professor Van Tam did not comment on the Sunday increase. MailOnline has contacted the Cabinet Office for further comment.

The day before the Prime Minister imposed a strict lockdown on March 23, the number of cars on the road was around 70 per cent of what it was in February.

Throughout the week, motor vehicle levels have been higher – close to 40 per cent, with a drop at the weekend and particularly on Sundays of around 10 to 15 per cent.

On March 29 they were just over 25 per cent of February levels, rising to around 28 per cent the following Sunday on April 5.

Easter Sunday April 12 saw the lowest traffic levels recorded by police forces since in the 1950s.

The Government figures show car usage as just over 20 per cent that weekend. But a week later it was over 30 per cent again.

Commenting on the Easter Sunday figures, Edmund King, the AA’s president, said: ‘For the most part, families and car drivers respected the lockdown and didn’t revert to the usual Easter exodus, travelling to see friends or out into the country for exercise.

‘Empty motorways were testament to car owners heeding government advice and not taking a holiday from the lockdown.

‘Overall, we expected some increase in car journeys after the initial collapse as essential workers and volunteers took to the road again.

‘However, the AA thinks that measures, such as police clamping down on cars parked at beauty spots away from where people live, may keep car journeys at their current low level for a while yet.’

There are now 124,743 confirmed cases in the UK with the most concentrated in London and the Midlands.

By Helen Cahill, City correspondent for the Mail on Sunday

Businesses have warned that £200million-worth of seasonal plants will be destroyed if centres are forced to stay closed until June.

That would mean an overall loss of £1.6billion due to the lockdown, so the industry has devised a rescue plan which it sent to officials two weeks ago.

It details how the UK’s 2,000 garden centres could open their doors for the rest of the crucial spring and summer season without putting customers and staff at risk. The three month period between April and June is the equivalent of Christmas for the horticulture industry.

Ready to sell: Plants waiting for gardeners at a centre in Essex. Businesses have warned that £200 million-worth of seasonal plants will be destroyed if centres are forced to stay closed until June

Garden centre bosses insist they could shift stock quickly and start paying suppliers if the Government approves the new arrangements, which would allow the public to buy plants, essential gardening equipment and pet care products that are being sold elsewhere in stores that stayed open.

Restaurants, cafes and areas selling non-plant products in the complexes would remain closed.

Under the plans, customers would only be able to use car parks in limited numbers, with an empty space left between each parked vehicle.

Entry to the centres would be strictly controlled, with one-way walking, one customer for every 1,000 sq ft of floor space and tape marks on the floor to enforce social distancing. Perspex screens would protect staff and trolleys would be disinfected regularly.

Sarah Squire, chairman of major chain Squires, said: ‘The timing could not be worse for our sector. It’s all about the spring for us, and if we can catch a little bit of that, it would make a very big difference.

‘We make 40 per cent of our annual takings from the middle of March to the end of June. So you don’t need a degree in economics to know that for the rest of the year it will be difficult for us.

‘You need to make your profits in the spring to carry the business through the rest of the year.’

Simon Burke, chairman of the country’s second-largest garden chain, Blue Diamond, said: ‘If the summer bedding plants aren’t sold between now and the end of June, they are dead.

‘Obviously there is absolutely no room for compromise on safety. But garden centres are large spaces so customers could come in and keep their distance, much more so than they would in an average food store, where the aisles are not very wide.’

Boyd Douglas Davies, president of the Horticultural Trade Association, warned that unless action was taken promptly, millions of plants would be heading towards compost heaps instead of gardens.

He added: ‘This is a quick and easy way for the Government to give something back to the public. If you’re asking them to stay at home for a long time, give them something to do in their garden.’ 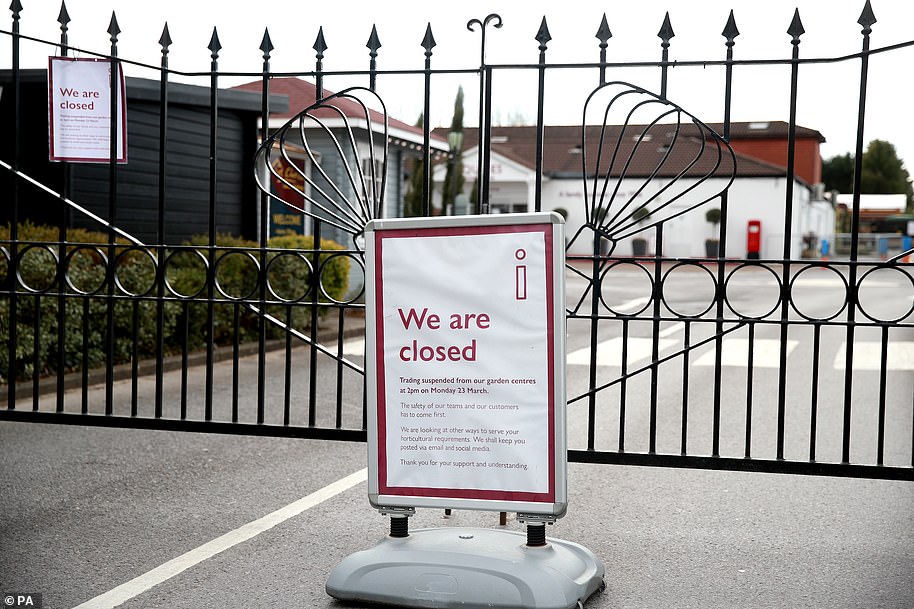 A sign in front of closed gates at Squire’s Garden Centre in Farnham, Surrey, during the lockdown. Garden centre bosses insist they could shift stock quickly and start paying suppliers if the Government approves the new arrangements (file photo)

The garden centres have missed out on much of the sales they would normally generate from spring plants but bosses are hopeful that they could avoid more serious financial pain if they are allowed to offload stocks of summer plants.

It is thought that independent nurseries that supply the larger stores could be worst hit, as some of them make up to 80 per cent of their yearly sales at this time.