Pet owner, 22, clubs his neighbour’s golden retriever to death in broad daylight after ‘the dog killed his poodle’

A Chinese pet owner has been detained after beating his neighbour’s golden retriever to death with a club in a revenge attack.

The culprit, 22-year-old He, was enraged last Monday after the golden retriever had allegedly bitten his poodle to death in their residential complex in Foshan, southern China’s Guangdong Province, according to police.

‘Go and see what a horrible death my dog has had,’ the man shouted at an onlooker after killing the retriever.

The incident took place in Shunde district on the morning of June 24.

Footage from Chinese social media shows the golden retriever’s elderly owner, 71-year-old Wang, trying to protect the dog using his body as He attempted to hit the dog with a weapon.

He then chased the dog down the residential complex wielding a club.

The man left the dog after it lay on the ground appearing to be dead. 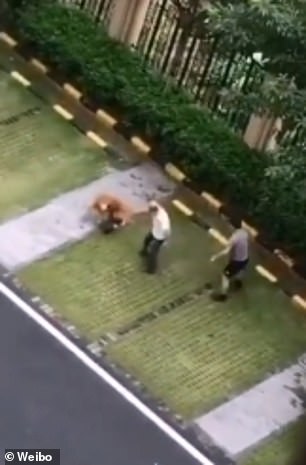 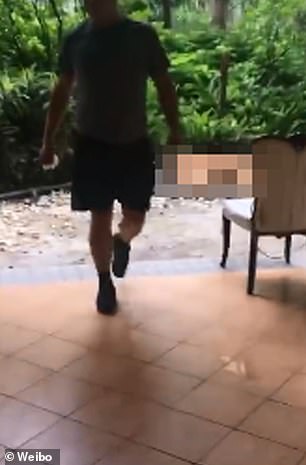 He, 22, has admitted to beating his 71-year-old neighbour’s pet golden retriever with a club as well as an umbrella and a jack. The retriever had allegedly bitten his poodle to death

Shunde Police detained He on June 28 on suspicion of intentionally destroying public and private property.

On a social media statement, the police said He had admitted to beating the golden retriever with a club as well as an umbrella and a jack.

It is also said that He pushed Wang during a verbal altercation, but Wang did not sustain any injuries.

The police did not reveal how He’s poodle had been killed by the golden retriever.

The case is under further investigation.