Live like a king! Man fulfils lifelong ambition to painstakingly restore ancient Welsh castle abandoned since 1690 into luxury home that can now be yours for £1.25 million

A conservation builder has spent five years transforming a ruined medieval house called The Old Castle into a three-storey home – using only period techniques and doing it all by hand.

Anton Jones only used old-fashioned materials such as lime mortar to transform the building and the solid oak beams were all cut and constructed on site, just as they would have been when first done 500 years ago.

The huge front door hinges and studs were also forged using traditional blacksmith methods and the roof and ceiling beams were fitted together with chunky, handmade wooden pegs.

Mr Jones, who has had a life-long fascination with the building in the Vale of Glamorgan and is now selling his restored home for £1.25m, said: ‘The house has not been lived in and loved since 1690, it’s time that changed.’ 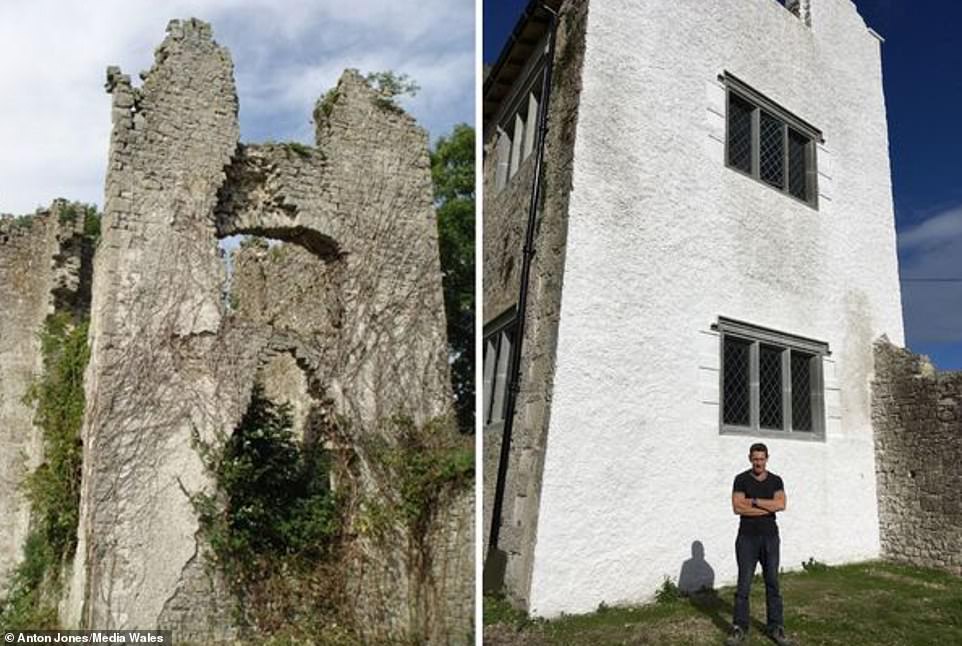 Anton Jones, right with the finished home, spent five years restoring part of an ancient castle in the Vale of Glamorgan after buying it for £5000 and only used traditional methods to complete the building project

Mr Jones, who describes his occupation as a ‘conservation builder’, explained how it wasn’t an option to quickly restore the listed building and he was dedicated to using period techniques.

However he did admit that he might not have saved The Old Castle if he’d known what a struggle it would be after first purchasing the ruin for £5,000 and following trying for 15 years to buy the scheduled ancient monument from the Vale of Glamorgan council.

He said: ‘It was completely ruined, in fact it shouldn’t really have been saved because it was too far gone.

Mr Jones said the restoration was excruciating to do, both physically and mentally. The first day was horrendous, trying to tackle the undergrowth and trees that had sprung up within and around the ruin.

A huge maze of scaffolding needed to be erected, including over the top of the ruin, to at long last get the site watertight and ready for the biggest renovation Mr Jones has ever tackled. 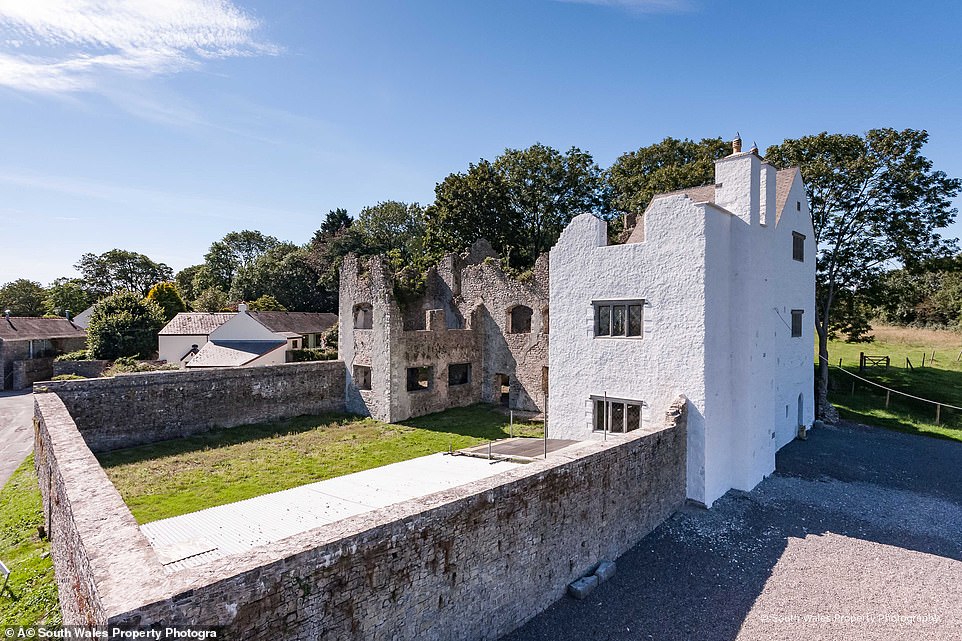 Mr Jones had a life long fascination with the castle, pictured after being restored, but admitted he found the then ivy-covered building spooky when he was a child and used to play nearby 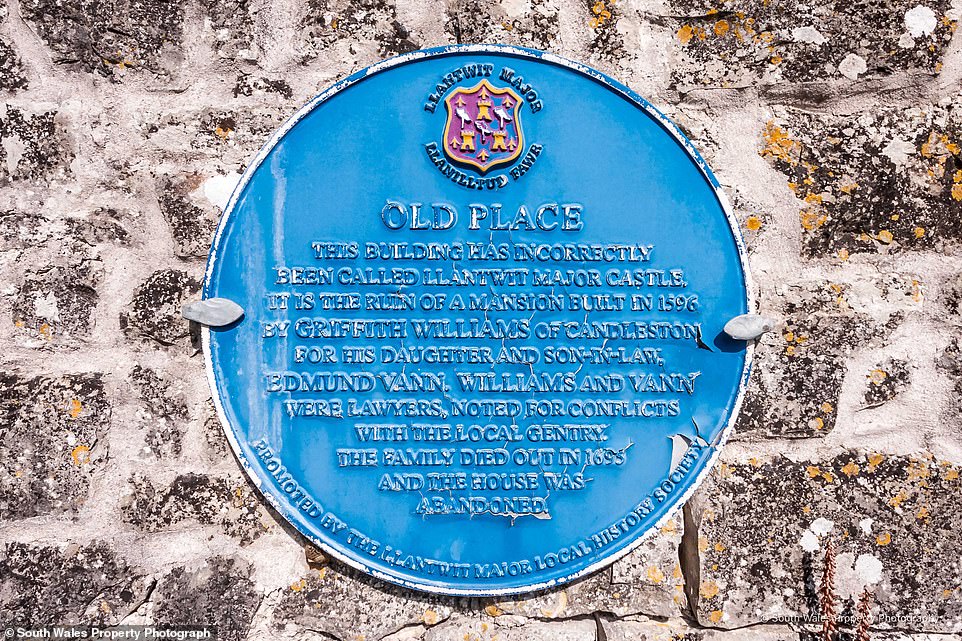 He said: ‘All the stone dressings were found buried in the floor in pieces, so we dug those up and put them all back together like a massive jigsaw piece.

‘Hundreds of tons of stone needed to be lifted in the air and we did it all with block and tackle which is the original lifting mechanism; just the two of us, we did it all by hand.’

The legend of the huge hole in the wall dates back to a time when the site was pillaged and stripped of all its internal features by thieves using a horse and cart to carry the spoils away. 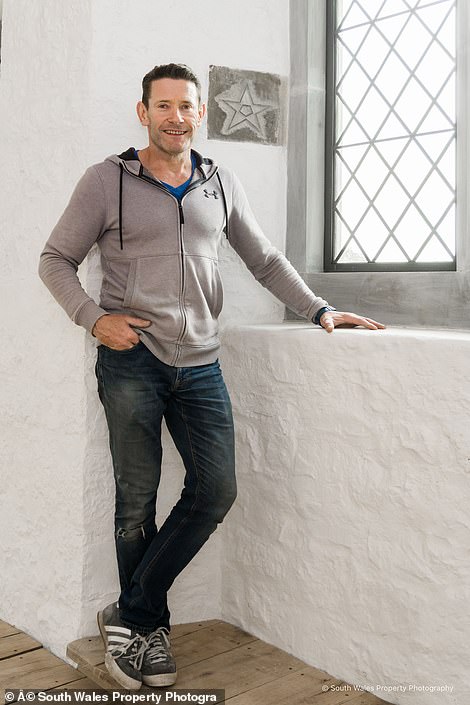 Mr Jones, pictured, said there had been ‘highs and lows’ during the demanding building project but added that: ‘It’s a gripe to sell it… I really don’t want to sell it’

Mr Jones said: ‘We found lots of the stone from the hole buried and put them all back in one of the walls. It was smashed out probably hundreds of years ago so people could come in and steal substantial things like all the sandstone windows and fireplaces.’

He said every aspect of the restoration was done by hand, with the roof causing the most difficulty.

He explained: ‘The beams weigh about one to two tonnes each and we had to lift them six-foot up into the air. It would have been easier to build it from new.’

But there was no chance of that ever happening, not just because the property is listed but also because of the special atmosphere the unique house and its remaining ruins exude.

Mr Jones says: ‘It’s a lovely atmosphere here, most people can feel it, it’s a special thing. It’s church like and very peaceful however it’s got a very welcoming atmosphere.

‘And what is special and unique about it is that there’s still this ruinous part attached to the home. I think to restore the remaining ruin would actually ruin it. It’s what makes the house so romantic.’

The project was also personal for Mr Jones, who revealed he had always been fascinated by the building, known locally as Llantwit Castle, since he was spooked by an experience there when he was a child.

He said: ‘It all started when I was a kid. I used to play here and was absolutely scared to death of it. It was very, very creepy in those days because the ruin was totally covered in ivy.

‘It was always very gloomy even on a summer’s day and there was always an eerie presence here and I actually got chased by horses here once. I can still hear the hooves hitting the stones now when I’m working here.’

The house itself is one restored wing of the former mansion with interiors designed to be authentic to the age of the building. 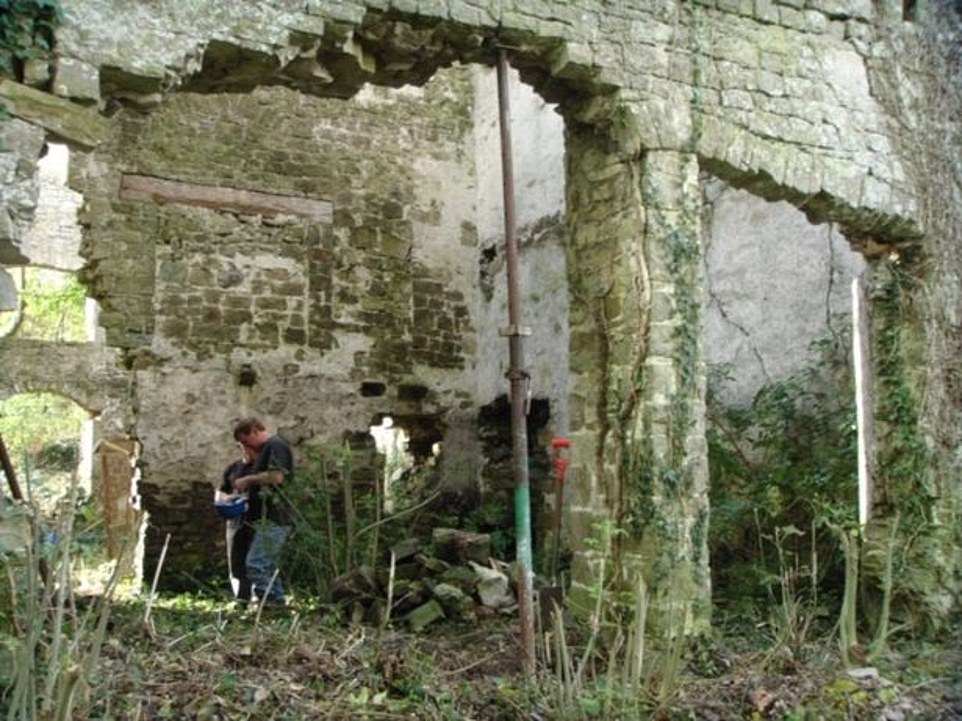 The conservation builder spent 15 years trying to buy the scheduled ancient monument, pictured before the building works, from the Vale of Glamorgan council and then another five transforming it into a three-storey home

It now has three storeys of rooms that ooze authentic medieval character but with modern amenities which are accessed through a huge metal studded front door.

The kitchen diner houses a range in the fireplace, Belfast sink unit, storage cupboard and blue pennant flagstone floors and there is also a garden that is  totally private and walled.

There is a substantial living room off the kitchen that has an abundance of ceiling beams, carved mullion windows with leaded inserts and a limestone fireplace complete with a mantle carving.

On this floor there is also a cloakroom. Potential buyers will be pleased to note that the facilities in this room are totally modern and not based on the medieval design of a hole out to the garden below.

Climb the hand-built oak staircase and past the whitewashed limestone walls and there are two bedrooms and a bathroom to discover on the first floor, with one having views of the Bristol Channel coast in the distance. 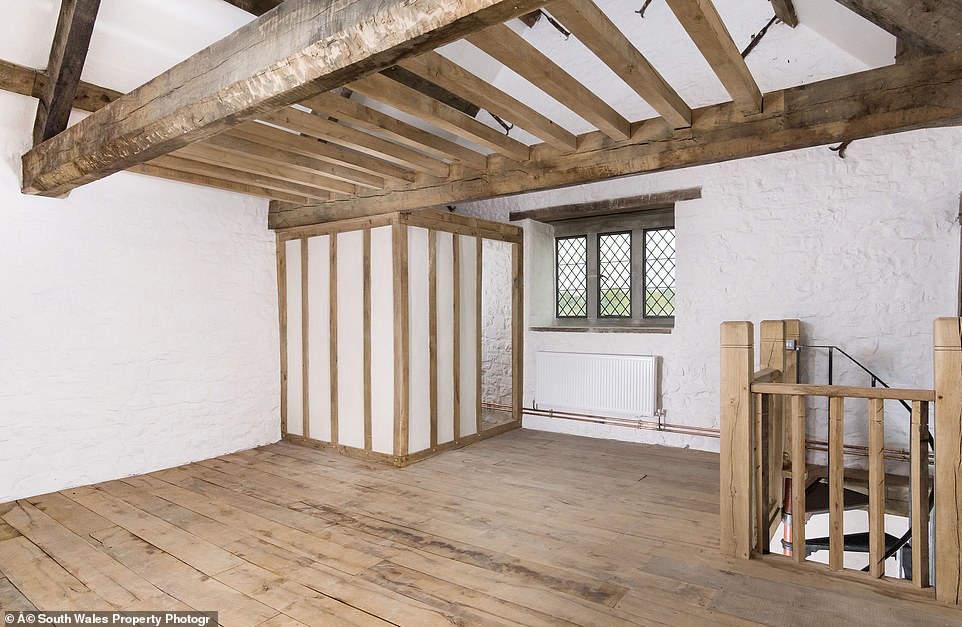 Mr Jones said the roof, pictured from one of the spacious bedrooms, was the most difficult part as the beams weigh about one to two tonnes each and had to be lifted six-foot up into the air 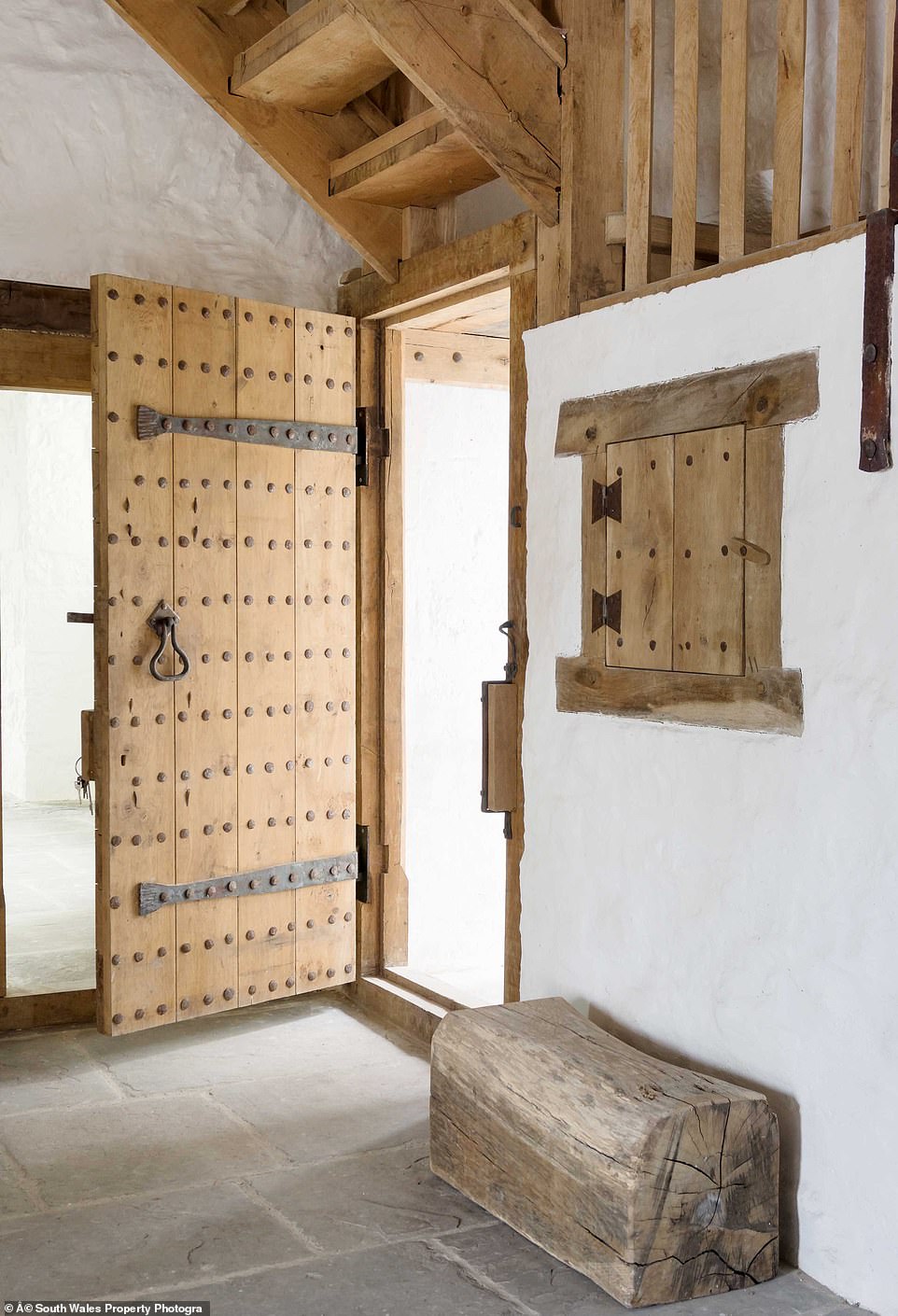 Up to the top floor and there is a large bedroom that has an incredible double height ceiling that contains a mezzanine level that could be a raised sleeping platform, a study space or a lounge.

Whichever space the new owner deems to be the principal bedroom they will be living in a building that has a fascinating past, being built by the locally famous Van family of Marcross, and thanks to Mr Jones it now has a future.

There were many times when Mr Jones almost gave up, but his love for the building was stronger than the challenges that confronted him.

He says: ‘When I took this on, a lot of people laughed and wished me great luck – which I needed – they sniggered and thought it was a stupid idea.’

During the project Mr Jones found many historic coins on the land, plus a massive key he assumes once opened the front door of this home.

He said: ‘We found an actual Henry VIII crown that was connected with the early building because it was embedded in the floor, which was a brilliant find. 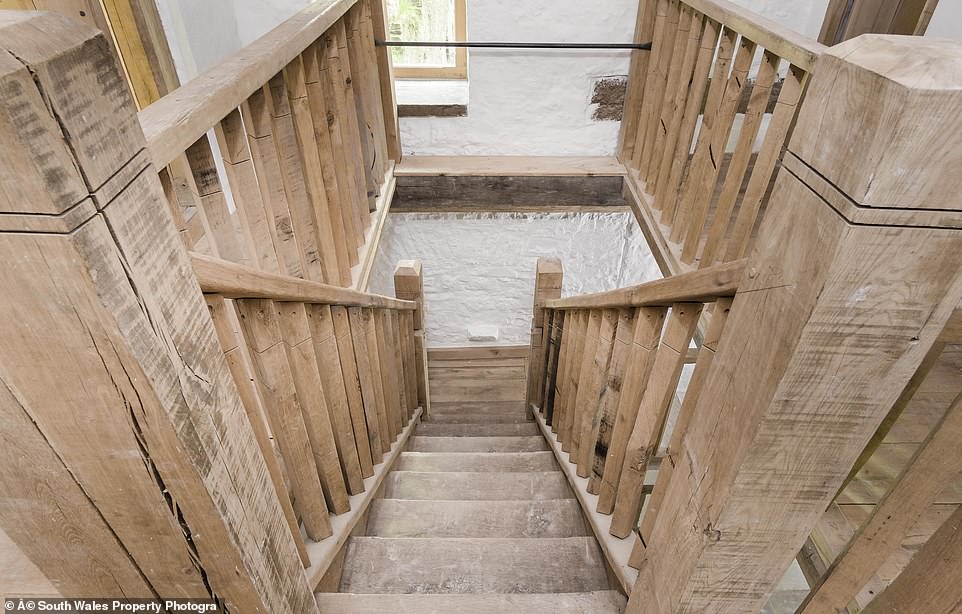 The home has been completed using period techniques and boasts wooden floors, stairs and beams across the ceilings

‘The Charles I half crown dates from about 1625 and was found here in the back garden and dates this castle spot-on because it was finished in 1597.’

The oldest coin Mr Jones has found is an Edward I penny which dates back to about 1300, which was found in the back field.

Mr Jones believes there are ruins and artifacts within the field that pre-date the house and go some way to prove that the site has been a home for many, many centuries.

As the restoration has progressed, so has the interest in what Mr Jones has been doing. He says people have stopped in their cars or on foot to view the project, stopping him for a chat to find out more.

That might have cost him some time but the project has cost him far more in monetary terms. It’s likely the final bill will run into hundreds of thousands of pounds, although Mr Jones reckons this would have been over a million pounds had he not done the work himself. 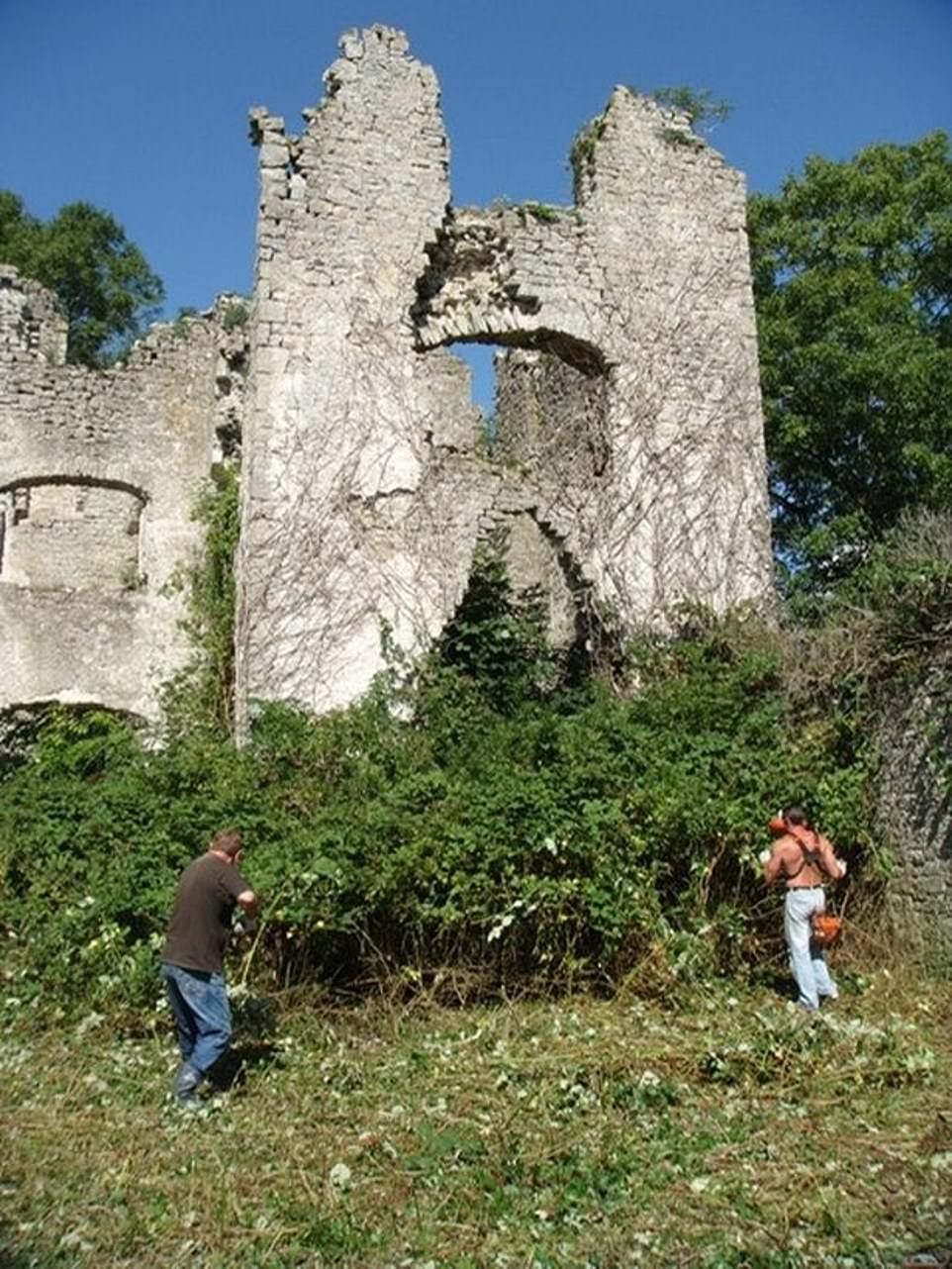 Mr Jones said the restoration was excruciating both physically and mental with the first task of tackling the undergrowth, pictured as it was being cut back, and trees around the ruin testing his limits 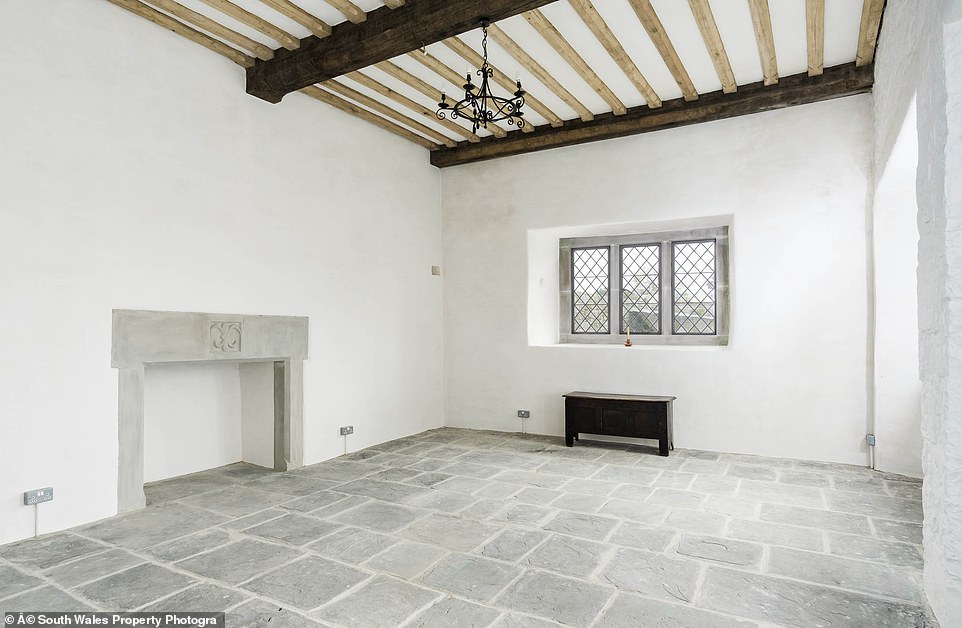 If Mr Jones hadn’t done the work himself, he thinks the restoration costs could have been over one million pounds. Pictured is one of the homes rooms which boasts a fireplace and stone floor

Adding in the years of back-breaking work to the money spent and Mr Jones has now reached a bitter-sweet moment; putting the three-storey wing he has saved from eternal ruin on the market.

He says: ‘Being a very determined person you can see now what it looks like, but it’s been five years of hell but enjoyable as well – it’s had its lows and highs. It’s a gripe to sell it, I am living here at the moment and I really don’t want to sell it.’

Mr Jones and the local population are not the only people who have been fascinated with the ancient building and its rebirth into a home.

Mr Jones says: ‘The TV programme Restoration Man starring George Clarke shot a pilot and they absolutely loved it and wanted to do it in the series but I couldn’t give them the start, middle and end date.

‘They needed it to be a six-month turnover but that was definitely impossible. They were interested because this home is totally unique. I believe it’s the first scheduled monument in Wales to be restored and turned into a dwelling.’

One of the finishing touches that Mr Jones has added to the property to mark its incredible rebirth is a carved phoenix plaque embedded into the wall.

The Old Castle is for sale for £1.25m with estate agent Brinsons & Birt.