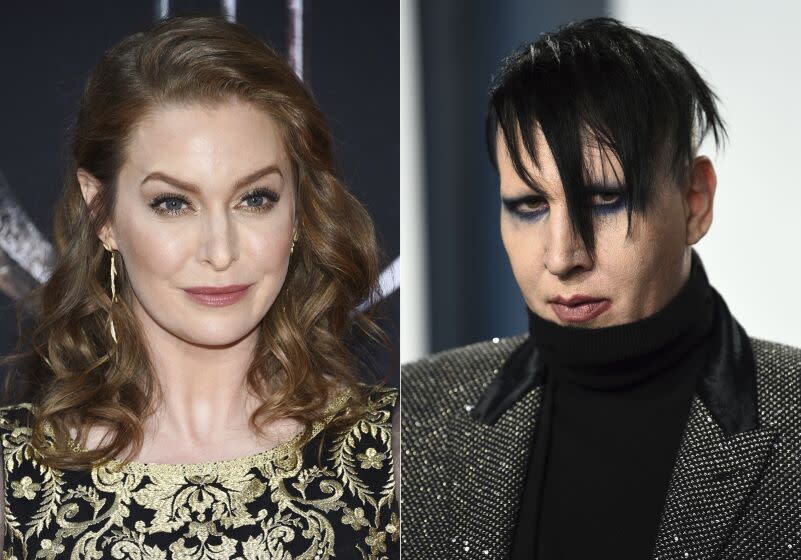 "Ms. Bianco has agreed to resolve her claims against Brian Warner and Marilyn Manson Records, Inc. in order to move on with her life and career," Bianco's attorney, Jay D. Ellwanger, said in a statement to The Times on Tuesday.

According to Rolling Stone, which broke the news of the settlement Tuesday, the terms of the agreement remain unknown.

In her lawsuit Bianco, 40, alleged the singer, 54, raped and abused her while they were dating in 2011. She also claimed that Manson, his former manager Tony Ciulla and Ciulla’s management company violated human trafficking laws by bringing Bianco from London to Los Angeles for roles in Manson's movie and music video projects that never materialized, all while Warner threatened and sexually abused the actress.

In 2021, Manson dismissed the allegations as "horrible distortions of reality.”

Bianco was among several women who came forward with serious allegations against Manson that year.

His former fiancée Evan Rachel Wood named Manson as her abuser in February 2021. She wrote in a since-deleted Instagram post the singer "started grooming me when I was a teenager and horrifically abused me for years." He denied those claims too.

"Obviously, my art and my life have long been magnets for controversy, but these recent claims about me are horrible distortions of reality," he said in an Instagram statement shortly after Wood's claims. "My intimate relationships have always been entirely consensual with like-minded partners. Regardless of how — and why — others are now choosing to misrepresent the past, that is the truth."

In light of the allegations, Manson was dropped by his record label and from the Creative Arts Agency.