‘Political speech is important’: Defiant Mark Zuckerberg shoots back after Twitter announced it would ban political adverts as Facebook boss says it is wrong for private companies to censor politicians or the news

Mark Zuckerberg has hit back at the importance of political ads on social media after Twitter announcing it will ban them on its platform.

The Facebook CEO made the impassioned speech about the importance of ‘political speech’ minutes after Twitter CEO Jack Dorsey said in a series of tweets that paid political messages would not be allowed.

Twitter announced an end to political campaign and issue ads on its service yesterday, calling it an important step in reducing the flow of election-related misinformation.

But Zuckerberg shot back quickly, using an earnings conference call on Wednesday afternoon to offer an impassioned defense of what he called his company’s deep belief ‘that political speech is important’.

He said: ‘This is complex stuff. Anyone who says the answer is simple hasn’t thought about the nuances and downstream challenges. 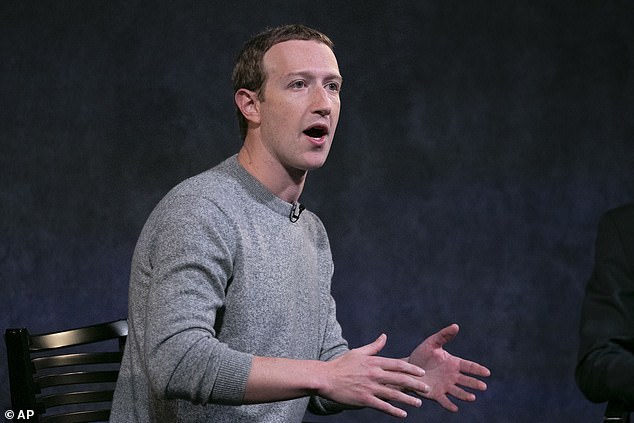 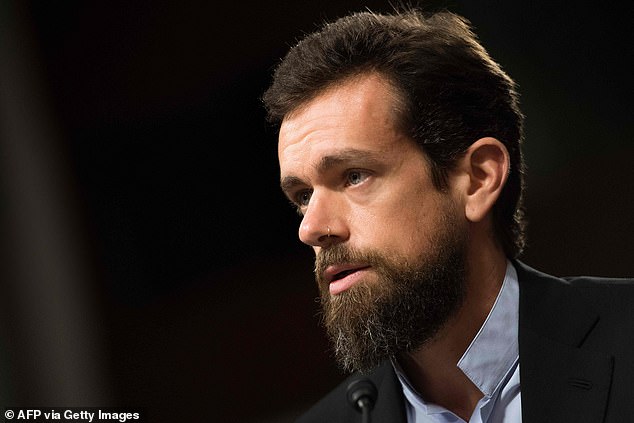 CEO of Twitter Jack Dorsey testifies before the Senate Intelligence Committee on Capitol Hill in Washington in September. Yesterday he said that it would stop accepting political advertising globally on its platform

‘I don’t think anyone can say that we are not doing what we believe or we haven’t thought hard about these issues.’

After the conference call, Zuckerberg then posted a lengthy message on Facebook that he strongly believes in the social media company has an ‘important role’ in ‘defending free expression’.

He wrote: ‘I believe strongly – and I believe that history supports – that free expression has been important for driving progress and building more inclusive societies around the world, that at times of social tension there has often been urge to pull back on free expression, and that we will be best served over the long term by resisting this urge and defending free expression.

‘Today is certainly a historical moment of social tension, and I view an important role of our company as defending free expression.’

In the post the Facebook CEO also said the company has ‘removed multiple foreign interference campaigns’ coming from Russia and Iran as the issue of ads potentially swaying masses of voters with fake news intensifies in the lead up to next year’s US presidential election.

Zuckerberg said he has also considered banning political ads, but remains wary of the move’s impact. ‘It’s hard to define where to draw the line,’ he said.

‘Would we really block ads for important political issues like climate change or women’s empowerment?’

A ban on such ‘issue ads’ could limit the ability of such groups to reach wider audiences or disadvantage them in other ways.

Among those potentially affected could be public-interest nonprofits eager to reach an audience larger than their official followers, challengers to incumbent officeholders, and – obviously – political consultants who make a living placing ad buys for their candidates. 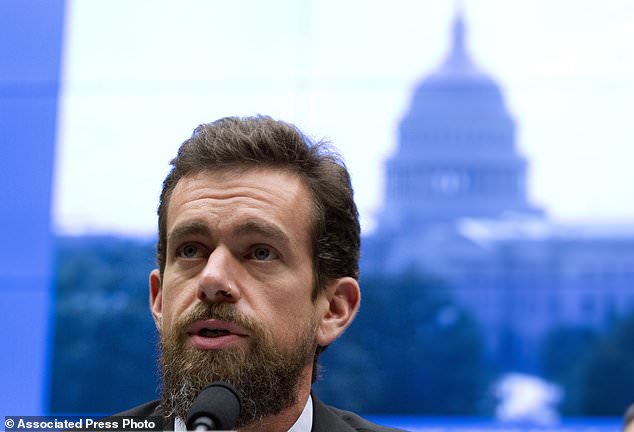 Twitter CEO Jack Dorsey testifying before the House Energy and Commerce Committee in Washington. Yesterday he said that ‘internet advertising is incredibly powerful and very effective for commercial advertisers, that power brings significant risks to politics’ 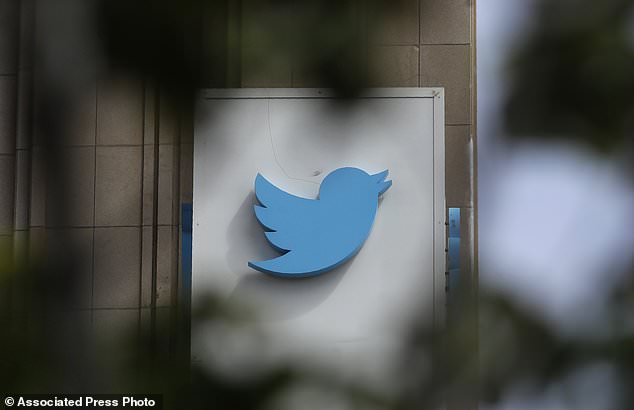 Dorsey wrote as the ban was announced: ‘While internet advertising is incredibly powerful and very effective for commercial advertisers, that power brings significant risks to politics, where it can be used to influence votes to affect the lives of millions.’

Security and privacy researchers and some Democratic politicians hailed Twitter’s decision as an important way to prevent campaigns from feeding streams of misinformation to targeted voters.

The move drew a sharp contrast between Twitter and its much larger rival Facebook, which has come under fire in recent months for its policy of not fact-checking political ads.

‘This is yet another attempt to silence conservatives, since Twitter knows President Trump has the most sophisticated online program ever,’ campaign manager Brad Parscale said.

Political advertising makes up a small sliver of Twitter’s overall revenue. The company does not break out specific figures each quarter, but said political ad spending for the 2018 midterm election was less than $3 million. It reported $824 million in third-quarter revenue.

The issue rose to the forefront earlier this fall when Twitter, along with Facebook and Google, refused to remove a misleading video ad from President Donald Trump’s campaign that targeted Biden.

In response, Democratic Sen. Elizabeth Warren, another presidential hopeful, ran her own ad on Facebook taking aim at Zuckerberg.

The ad falsely claimed that Zuckerberg endorsed President Donald Trump for re-election, acknowledging the deliberate falsehood as necessary to make a point.

Dorsey said the company is recognizing that advertising on social media offers an unfair level of targeting compared to other mediums. It is not about free expression, he asserted. 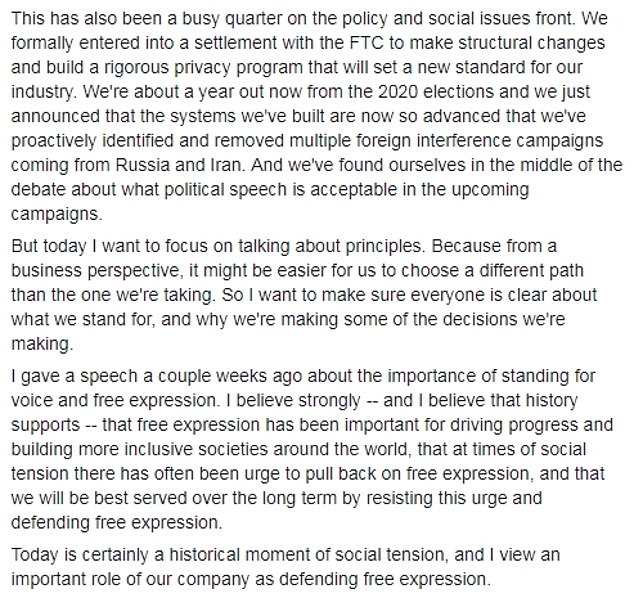 Mark Zuckerberg posted on Facebook after his conference call to reiterate the importance of ‘free expression’ in relation to the upcoming US presidential election next year. He also claimed the company had removed multiple foreign interference campaigns from Iran and Russia

‘This is about paying for reach. And paying to increase the reach of political speech has significant ramifications that today’s democratic infrastructure may not be prepared to handle,’ he tweeted. ‘It’s worth stepping back in order to address.’

Ryan Schleeter, a spokesman for the environmental group Greenpeace, said a lot will depend on how Twitter defines ‘political’.

What the group doesn’t want to see, Schleeter said, is major oil companies running ‘misleading, greenwashing advertising unchallenged’ while ‘those who confront corporate power are censored.’

Political challengers will also find likely find themselves at a disadvantage, since they don’t generally have the name recognition or money that their opponents do, said Matt Shupe, a Republican political strategist.

‘If you’re a challenger, advertising allows you to make up that difference,’ he said. ‘It’s very hard to organically grow an audience for a state assemblyman campaign.’

Shupe, whose public relations firm has won awards for its use of ads on Facebook, called Twitter’s decision ‘incredibly dumb’.

Twitter said it will make some exceptions, such as allowing ads that encourage voter registration. It will describe those in a detailed policy it plans to release on Nov. 15, and the policy will take effect November 22.

Twitter will still allow politicians to freely tweet their thoughts and opinions, which can then be shared and spread. Trump’s Twitter feed in particular is known for often bombastic and controversial tweets that are shared widely.

Federal campaigns are expected to account for the majority of advertising dollars on broadcast and cable channels during the 2020 election, according to advertising research firm Kantar.

They will also be responsible for roughly 20 per cent of the total $6 billion in spending on digital ads.