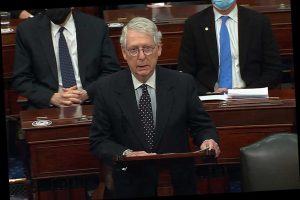 From the Senate to Mike Pence, Trump destroys the party on the way out the door: Devine

Trump is responsible for this day of infamy in America: Goodwin

US Capitol building invaded for first time since War of 1812

Senate Majority Leader Mitch McConnell on Wednesday night blasted the “thugs” who broke into the US Capitol in an attempt to prevent Congress from accepting President-elect Joe Biden’s win in the Electoral College.

The Republican leader called the incident a “failed insurrection” waged by supporters of President Trump.

“The United States Senate will not be intimidated. We will not be kept out of the chamber by thugs, mobs or threats,” McConnell (R-Ky.) said on the Senate floor after lawmakers returned to the Capitol.

“We will not bow to lawlessness or intimidation. We are back at our posts. We will discharge our duty under the Constitution and for our nation. And we’re going to do it tonight.”

McConnell spoke shortly after 8 pm when Vice President Mike Pence, as Senate president, reconvened Congress for deliberation on and certification of Biden’s 306-232 win in the Electoral College.

A mob of Trump’s supporters broke into the Capitol building, forcing its evacuation, shortly after the president addressed thousands of supporters in a defiant speech near the White House around noon.

McConnell said that “even during an ongoing ongoing armed rebellion and the Civil War, the clockwork of our democracy has carried on.”

“We’ve never been deterred before, and we will be not deterred today. They tried to disrupt our democracy. They failed.”

The top congressional Republican called the attack a “failed insurrection,” reflecting the severity of the incident.

“This failed insurrection only underscores how crucial this task before us is for our republic,” McConnell said.

“Our nation was founded precisely so that the free choice of the American people is what shapes our self government and determines the destiny of our nation. Not fear, not force, but the peaceful expression of the popular will.”

He added: “Now we’re going to finish exactly what we started…. Criminal behavior will never dominate the United States Congress. This institution is resilient. Our democratic republic is strong. The American people deserve nothing less.”