Miami is considering moving homeless people out of the streets and into city-sponsored encampments on an island next to a sewage plant.

Earlier this year, Miami-Dade’s Board of County Commissioners asked city officials to pitch ideas on how to mitigate its homeless population in the city, which was recently recorded at 1,525 people.

On Thursday, the board will discuss the latest plan detailed by City Manager Art Noriega’s staff, which calls for an encampment to be established on the northern tip of the Virginia Key island, beside a sewage treatment plant and a biking trail.

Details of the plan were published on Tuesday, just as former President Donald Trump suggested a similar concept nationwide during his first speech back in Washington D.C. 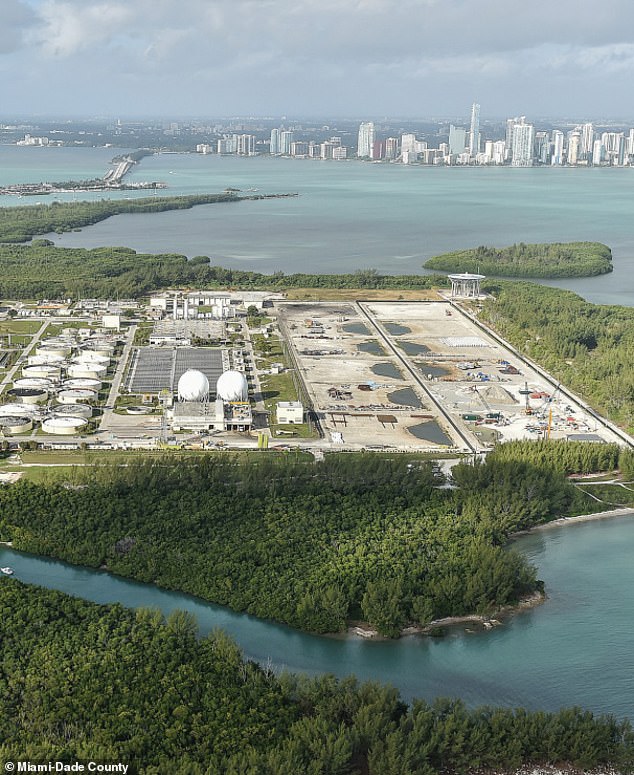 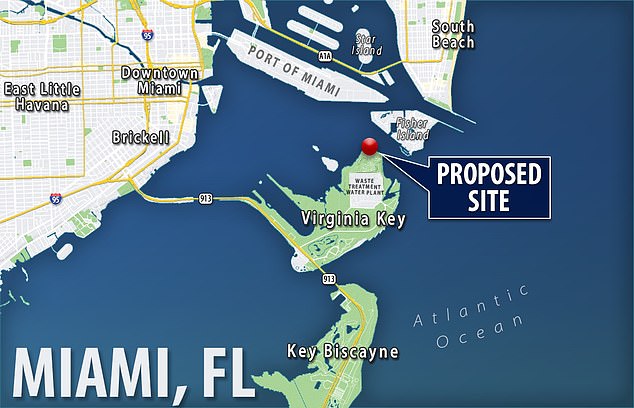 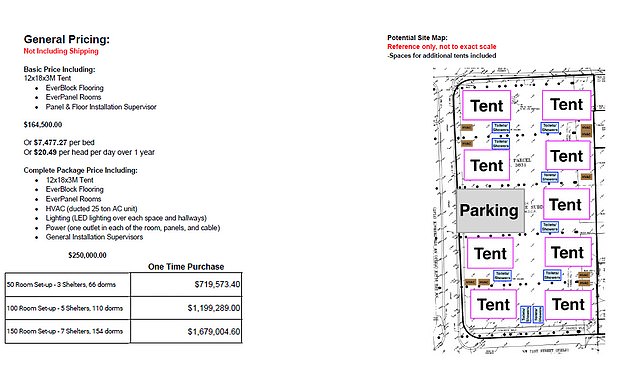 The plan offers options to establish 50 to 150 rooms for homeless people through tents, with prices ranging from more than $719,000 to nearly $1.68 million 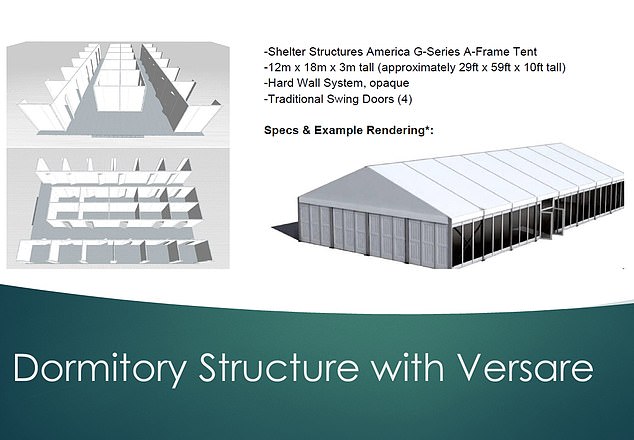 Pictured: A mockup of the dormitory structure tents proposed for the Miami project

Miami’s proposal details a plan to establish as many as nine large tents, which can hold up to 22 people, and a parking lot in the northern tip of the Virginia Key.

It would include air conditioning units for each tent, as well as bathrooms and showers for the occupants.

Aside from the tent-dormitory style encampment, the plan also lays out options to build tiny homes on the island tip that would be more ‘visually appealing.

Officials, however, warn that the houses could be perceived as permanent dwelling by the homeless and reduce the changes of them leaving as the encampment is ultimately seen as a transitional home.

Other options include setting up collapsible trailers or small sheds that can fit up to two beds.

The city also has four our possible, albeit less desirable locations as options, including three parking lots, two of which are located near residential buildings.

The County Board did not immediately reply to DailyMail.com’s request for comment. 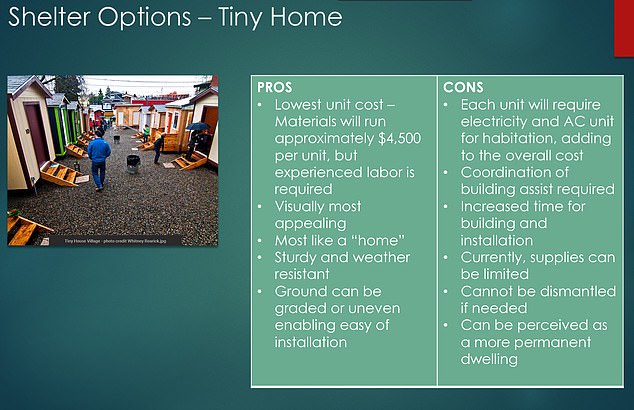 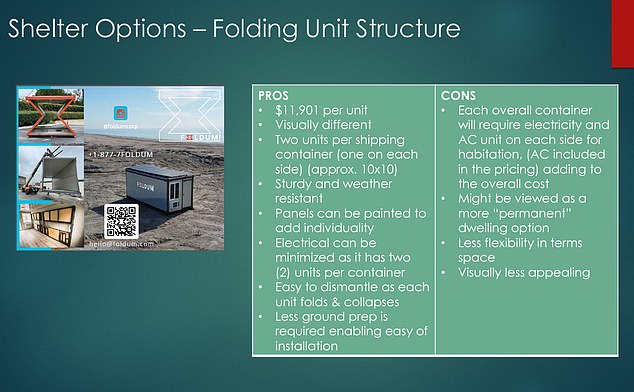 Other options include setting up collapsible trailers that cost more than $11,000 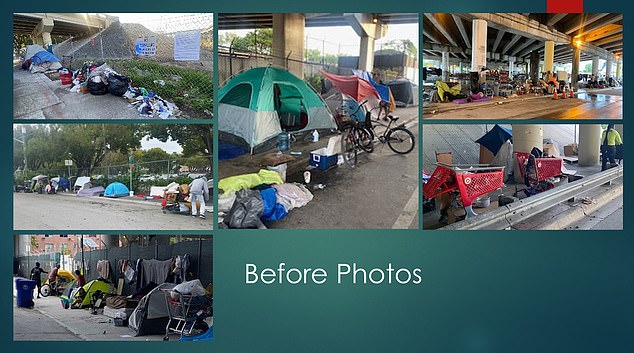 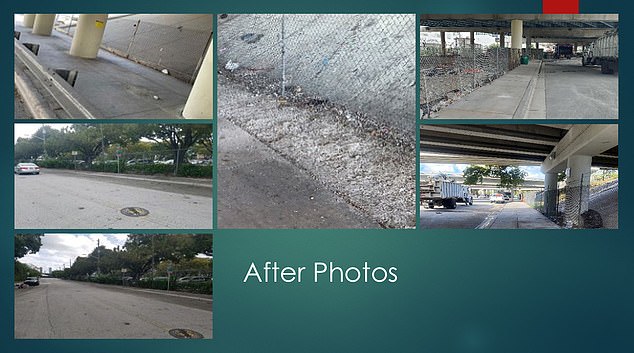 Since the bill was passed, Miami officials reported more than 194 clean ups around the city, with 56 arrests at homeless encampments

This is not the first time the city has proposed setting up a homeless encampment on the island, as one of its commissioners, Joe Carollo, first suggested the concept last year, the Miami Herald reported.

The plan drew backlash when a bill Carollo co-sponsored that banned homeless encampments and empowered police to arrest vagrants if they refused to be moved to shelters passed last September.

Since the bill was passed, Miami officials reported more than 194 clean ups around the city, with 56 arrests at homeless encampments.

It also reported 883 cases where homeless individuals were placed in shelters, as well as 13 referrals to mental health centers and 21 for substance abuse centers.

The new plan has already drawn backlash from the public, as the Miami Bike Scene group argued that the Virginia Key location is not ideal for the homeless population.

‘We are strongly opposed to ANY type of Temporary Shelter Option (Tiny Home, Dormitory Structure, Modular Unit Structure, Folding Unit Structure) on Virginia Key,’ the group, wrote in a statement.

Along with complaints that the encampment would border the island’s bike trail, the group argued that it was two-miles away from the nearest bus stop and that they island was filled with mosquitoes and vermin. 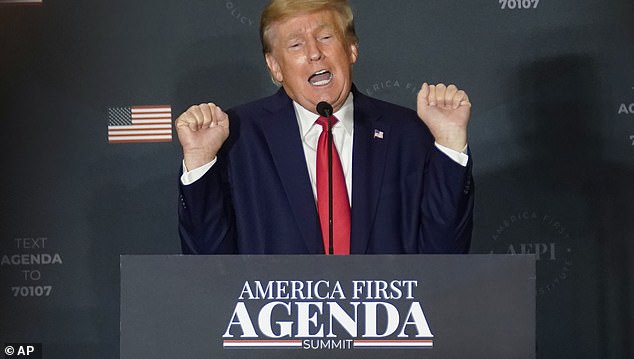 The plan was published on the same day former President Donald Trump suggested a similar concept nationwide during his Washington D.C. speech (above) 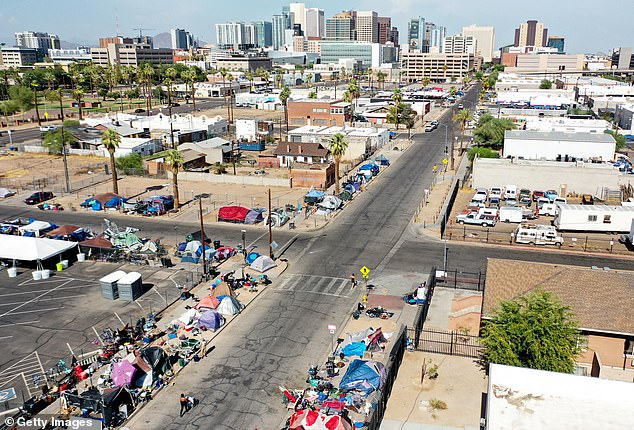 Trump called on homeless encampments with ‘high quality tents’ to be build on the outskirts of cities. Pictured: Homeless camps in Phoenix, Arizona

‘Open up large parcels of inexpensive land in the outer reaches of the city,’ Trump said of his plan for the homeless, calling his real estate developer background into the forefront. ‘Create thousands and thousands of high quality tents.’

He said it was the ‘only way you’re going to remove the hundreds of thousands of people, and maybe throughout our nation millions of people,’ referring to the homeless.

‘It can be done in one day,’ Trump added.