Micheal Martin has formally resigned as Ireland’s premier, paving the way for Leo Varadkar to succeed him in a planned handover of power.

Mr Varadkar will later be confirmed as taoiseach for the second time following a special sitting of parliament in Dublin.

The Fine Gael leader is replacing Fianna Fail leader Mr Martin at the head of government as part of a job share agreement under the terms of a coalition deal struck in 2020.

Mr Martin had served as Ireland’s leader, or taoiseach, since the 2020 election that produced a historic coalition agreement between his Fianna Fáil party and Varadkar’s Fine Gael.

Forming a government along with the smaller Greens, the parties agreed Martin would hold the top job with Varadkar as his deputy for the first half of a five-year term, before the men switched posts.

Mr Martin formally tendered his resignation during an audience with Ireland’s President Michael D Higgins at the presidential residence at Aras an Uachtarain in Dublin on Saturday morning. He was accompanied by his wife Mary.

In resigning, Mr Martin said it was ‘the honour of a lifetime’ to serve the public as taoiseach. 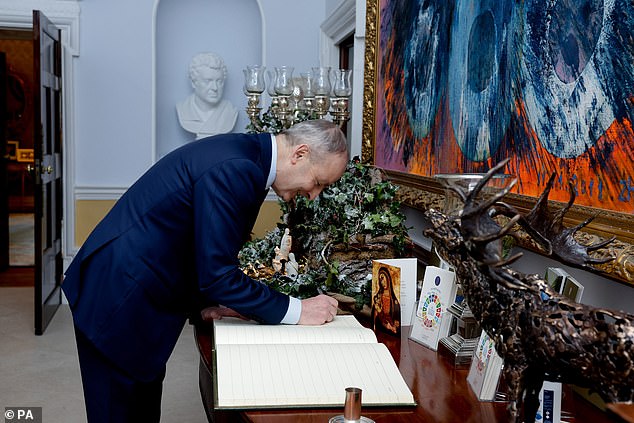 Micheal Martin has formally resigned as Ireland’s premier, paving the way for Leo Varadkar to succeed him in a planned handover of power 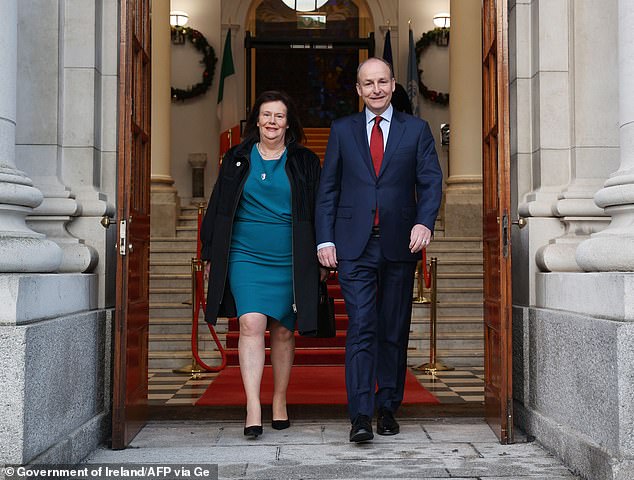 Mr Martin formally tendered his resignation during an audience with Ireland’s President Michael D Higgins at the presidential residence at Aras an Uachtarain in Dublin on Saturday morning. He was accompanied by his wife Mary (pictured together)

Addressing the Dail at the start of Saturday’s sitting, he said: ‘It is both a privilege and a responsibility to serve as head of government in a free and democratic republic.

‘I have been deeply conscious of this every day I have held the office of Taoiseach. I have sought always to work on behalf of all the Irish people and not just those who support my party and our colleagues in government.’

‘I want to thank him for his co-operation over the last two-and-a-half years and his dedicated work,’ he said.

‘The Government has worked on the many enormous pressures but we’ve succeeded in keeping our focus on moving our country forward. I look forward to maintaining this spirit during the rest of our term.’ 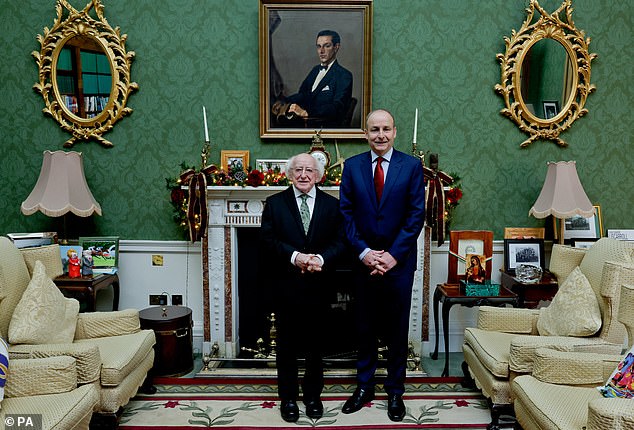 Setting aside almost a century of animosity, Fianna Fail and Fine Gael, two parties forged out of Ireland’s Civil War of the 1920s, agreed to share power together in 2020 after that year’s inconclusive general election result.

Supporting Mr Varadkar’s nomination, Green Party leader Eamon Ryan said: ‘It’s like half time, the captain’s armband will be passed from one to the other.’

‘But it will be a similar team and one thing I know, I’m absolutely certain for sure, that Micheal Martin will be running out on Monday morning with the rest of us, determined to do everything we can to serve the Irish people.’

While Fianna Fail emerged from the 2020 poll narrowly winning the most seats (38), Sinn Fein (which won 37 seats) secured the most first preference votes. 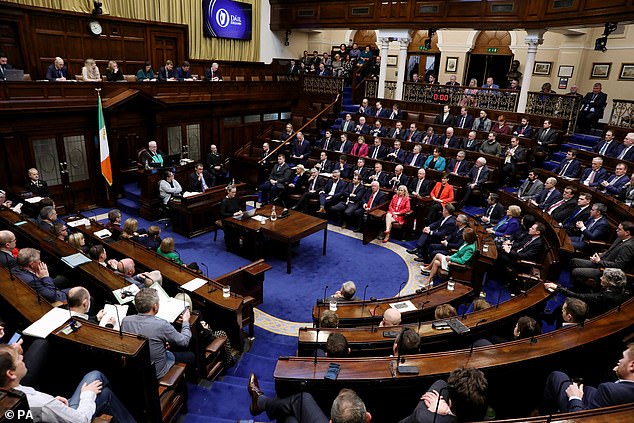 Supporting Mr Varadkar’s nomination, Green Party leader Eamon Ryan said: ‘It’s like half time, the captain’s armband will be passed from one to the other’

Sinn Fein accused its two main rivals of conspiring to keep it out of power and has continued to heavily criticise the coalition administration in its role as the primary opposition party in the Dail.

The dynamic between the three big parties is set to dominate the narrative of Irish politics leading up to the next general election, which has to take place before spring 2025.

She said the resignation of Mr Martin should trigger a general election as she accused the coalition of being ‘out of touch, out of ideas and out of time’.

Ms McDonald questioned the outgoing taoiseach’s claim that the government was delivering.

‘Well, the rest of us must live in a very different Ireland from you,’ she said.

‘And you now pass the baton to Leo Varadkar at a time where more than 11,000 of our people are homeless, including more than 3,000 children. Close to one million people are on treatment waiting lists, many working families queue at food banks to get a hot meal.

‘Surely you cannot count this as success?’

Mr Varadkar previously served as taoiseach from 2017 to 2020 at the head of a minority Fine Gael administration that relied on a confidence and supply arrangement with Fianna Fail to maintain power.

The mid-term switch of premiers will also prompt a cabinet reshuffle in Dublin, however, there is expected to be minimal movement among the departmental portfolios.

Mr Martin will become deputy premier (tanaiste) and will also take on a ministerial post.

One scenario could see Mr Martin become Ireland’s foreign affairs minister, a position he held more than a decade ago.

Current foreign affairs minister Simon Coveney could then potentially replace his party leader Mr Varadkar at the helm of the department of enterprise.

It has already been agreed as part of the coalition agreement that Fine Gael Finance Minister Pascal Donohoe and Fianna Fail Minister for Public Expenditure Michael McGrath will switch roles.

Cabinet colleagues will be confirmed in office by the president later in the day before the new-look government is expected to hold its first meeting.