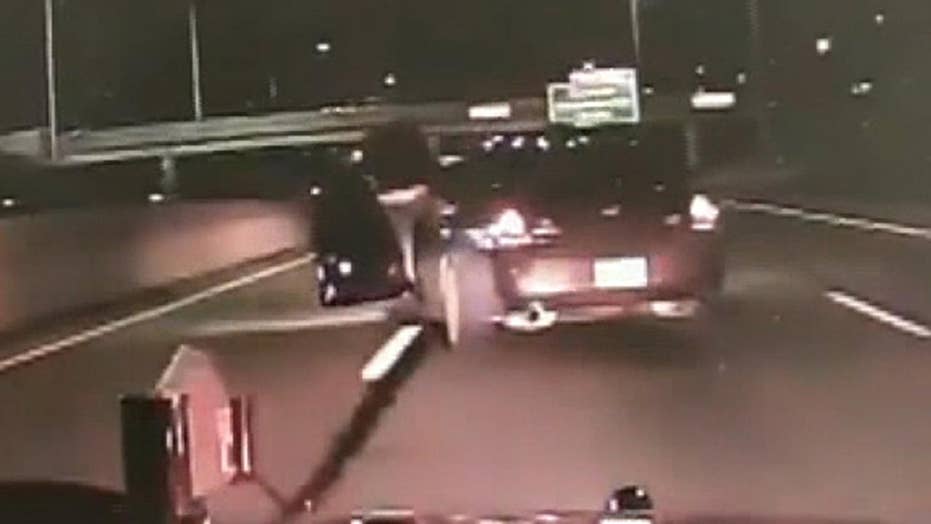 Raw video: Driver who was stopped for a speeding violation takes cops on wild pursuit. The man appears to attempt to jump out of moving car before crashing the vehicle into the median and fleeing on foot before being apprehended by officers.

A dramatic car chase video, released by police, shows a driver's unsuccessful bid to escape troopers by jumping from his speeding vehicle before crashing, nearly crushing himself.

A Michigan State Police trooper tried to pull a driver over for speeding on Interstate 94 on Friday. But police said the man continued weaving the black Impala in and out of traffic and drifting across lanes.

The trooper in pursuit initially stopped the chase for safety reasons, but the driver later reappeared on the freeway and set off a wild chase, Lt. Mike Shaw told WDIV-TV. 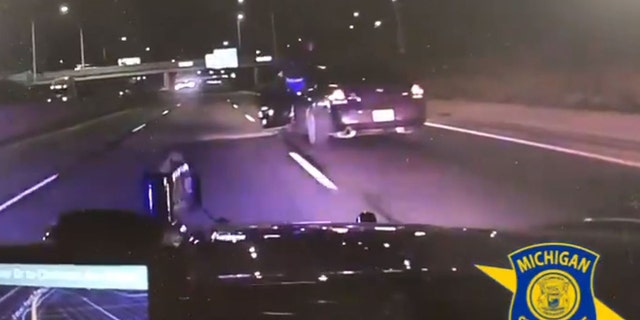 The driver appeared to make several attempts to bail from the speeding vehicle as troopers pursued close behind.
(Michigan State Police Metro Detroit)

Dashcam footage shows the driver opening the car door and leaning out in an apparent attempt to abandon the vehicle while still speeding in front of the trooper. Unable to keep control of the car, he crashed into the center median, almost crushing himself.

The man then appeared to jump from the car before it came to a full stop, hopping over the median and running through oncoming traffic.

Shaw said the trooper followed, and used a Taser to subdue the man and make the arrest. The chase started because the man had outstanding warrants and didn't want to stop, police said.

“Lucky no one was hurt, and the bad guy went to jail,” state police wrote on Twitter.

Police said they released the video during their “Back the Blue” celebration this week to show the public the kind of everyday encounters troopers face while doing their job to protect citizens.