Agency leeches are sucking NHS dry: Middlemen charge HALF A BILLION pounds a year to provide locum nurses and doctors… and one group of staff were even given free trip to the Caribbean

Middlemen are charging the NHS half a billion pounds a year in fees for agency staff.

The massive premium, which is on top of sky-high wages paid to locum doctors and nurses, can be revealed today by a Mail audit. Campaigners called for action to stop firms ‘gorging themselves on NHS money’.

Employees at one agency were rewarded for a profitable year with a free trip to the Caribbean, where they were pictured sipping cocktails in a hotel.

Recruitment firms have boasted of record profits due to increased demand during and since the pandemic. 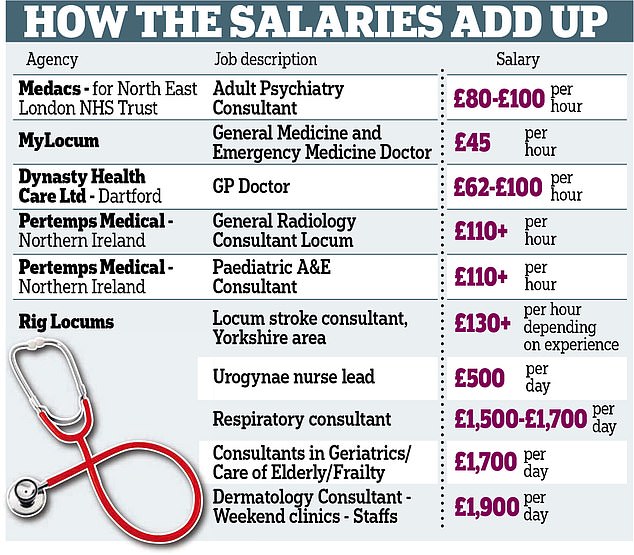 The NHS is facing its greatest staffing crisis ever, with shortfalls of 12,000 hospital doctors and more than 50,000 nurses and midwives.

Locums can be called upon to fill any hole in the rota, from a single day to a month, and even longer.

As frontline NHS staff risked their lives in Covid wards, these ‘elite’ employees at a top locum agency sipped cocktails on an all-expenses-paid trip to the Caribbean.

Campaigners have claimed this picture lays bare the ‘lavish practices’ that ‘rub salt into the wound’ of health workers who sacrificed everything. Cook Recruitment Group made a £1.1million profit last year thanks, in part, to hiring out locum medics to more than 200 UK hospitals.

These sums may explain how it can afford to send members of its ‘Elite Club’ on annual luxury week-long holidays.

Directors David Cook, his brother Glenn and wife Jenny have overseen record profits since the start of the pandemic as demand for workers rocketed. They pocketed £425,000 between them last year.

Cook Recruitment told the Mail it provided locum staff ‘at rates which are laid down by the NHS’, but accepted these caps were broken ‘from time to time’ under exceptional circumstances. 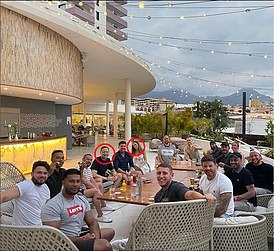 The NHS in England spent £3billion of its total £136billion budget on agency staff this year to plug gaps.

The Mail audit examines the accounts of ten leading agencies. It shows that they keep around 20 per cent of the sum they charge to the health service, after covering the wages of the locum staff.

That equated last year to £600million that could have been used for training.

Theresa Villiers, a Tory former Cabinet minister, said: ‘This is shocking and it has to stop. These funds should be devoted to patient care.

‘Both the NHS and the Government need to get a grip on this and get these costs down. This is ripping off the taxpayer and the NHS.’

The insider added: ‘While we are recruiting thousands more NHS doctors and nurses, temporary staff are needed to help clear the treatment backlog left by the Covid pandemic.

‘We do need to cut wasteful spending and ensure every penny of NHS cash goes into caring for patients and not excessive profits for recruitment consultants. We will act to address any abuse of the current arrangements.’

The audit also revealed that profit for the agency industry could have reached up to £100million, based on average margins of just over 3 per cent.

Cook Recruitment Group, which runs National Locums, Locum People and The GP Team, made £1.1million in profit last year, thanks, in part, to NHS cash from more than 200 UK hospitals.

National Locums describes itself as ‘a leading supplier’ of doctors and nurses to the NHS and private hospitals and saw its turnover increase by 14.4 per cent last year to £20million, all of which was derived from fees.

Locum People offers doctors a £250 reward if they refer a friend who then works 250 hours, with no limit on the number of colleagues they can refer.

A GP role in east London with National Locums offered £950 for an on-call shift that would equate to £247,000 a year.

ID Medical Group Holdings – the parent company of agency ID Medical – made a profit of around £3million, part of which was derived from the fees it charges the NHS to hire locums.

Its website boasts of ‘1.6m+ locum hours filled per annum, often more’ and claims to have 95 per cent of trusts ‘regularly working with us’. It says it offers around 2,000 ‘roles for doctors per month, on average’.

At 83, Dr Mo Sacoor shows no signs of slowing up.

The self-described ‘crazy cardiologist and serial entrepreneur from Mozambique’ founded locum agency ID Medical in 2002 – and last year it turned over more than £100million.

Its parent company, ID Medical Group Holdings, made a profit of around £3million, part of which was derived from the fees it charges the NHS to hire locums on its books. 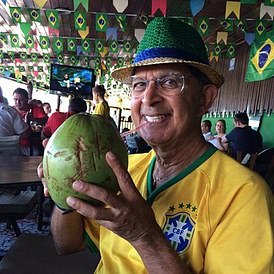 A further firm, Medsol Healthcare, which has supplied locums to the NHS for more than a decade, boasted of a ‘record first quarter due to increased demand from the NHS’ in 2021.

The firm posted £1.8million profit at a margin of 8 per cent. Medsol did not respond to a request for comment.

In an attempt to bring down eye-watering agency pay deals of £400,000 a year or more, the NHS brought in a salary cap of 150 per cent of standard pay in 2015, but trusts can make exceptions if necessary.

Dennis Reed, of campaign group Silver Voices, said: ‘The Mail has identified a scandalous situation. These agencies are gorging themselves on NHS money.’

Labour health spokesman Wes Streeting said the failure to train enough doctors had left the health service ‘at the mercy of recruitment firms’.

He added: ‘Millions of pounds of taxpayers’ money is going straight into the pockets of recruitment executives, while patients find it impossible to get a GP appointment or an operation.’

Neil Carberry of the Recruitment and Employment Confederation, which represents companies supplying temporary staff, said they kept the NHS ‘on its feet’.

He said the margins agencies take cover ‘things like national insurance and the safety checks firms must do to make sure patients are kept safe’.

He added: ‘The real problem is that the NHS staffing frameworks are not fit for purpose – an unwillingness from the Government to pay nurses and doctors what they are worth has led to more and more shifts being rejected, and more high-cost, last-minute shifts being needed.’

David Cook, of the Cook Recruitment Group, said: ‘Without companies such as ours, the NHS would not be able to function.’

He said the firm provided staff ‘at rates laid down by the NHS’, adding: ‘We are proud of the investment we make in our team.’