Mindy Kaling is getting ready for the final chapter of Never Have I Ever.

Netflix's coming-of-age comedy, which Kaling co-created, is coming to an end with the fourth season, the streaming service announced in March. While it will be a while before the series says goodbye, as the final season is slated to premiere in 2023, Kaling explained why it was time to let Devi (played by breakout star Maitreyi Ramakrishnan) grow up.

"Four seasons for a high school show felt like it made sense," Kaling told ET's Matt Cohen while promoting her ambassadorship with the Pancreatic Cancer Action Network ahead of their national fundraising event, PanCAN PurpleStride, on April 30. (She also offered an updated on Legally Blonde 3.) "They can’t be in high school forever. We've seen those shows. Like, you've been in high school for 12 years. What is going on here? Also, the actors get older and it starts looking insane that a 34-year-old is playing a 15-year-old."

"So there are some things are built-in doing a high school show that felt like, OK this is time," she added. "But the truth is, we got to know the characters. The great thing about doing it on Netflix is that we got to tell stories that you wouldn’t necessarily be able to tell in traditional network shows and so we feel good. We really told the story of this 15-year-old girl and that felt like the perfect amount of time." 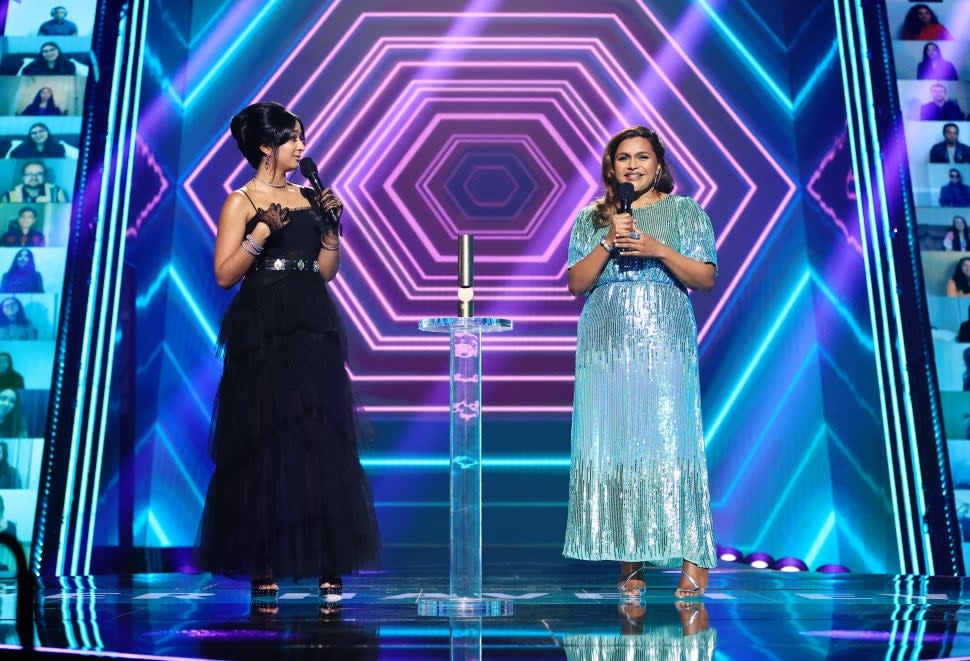 Kaling also looked ahead to another coming-of-age series, HBO Max's The Sex Lives of College Girls, which is set post-high school and is returning for a sophomore season.

"With the show, Sex Lives of College Girls, you come with certain expectation, right? It's gotta be sexy and for someone like me — I'm watchingBridgerton and clutching my pearls, I'm such a prude — that show is challenging for me," she confessed. "The actresses are so talented, the writers are so good, but we have to write these situations that seem really realistic college, funny sex stories and that's the one where I go into the writers' room to come up with the stories where I'm always bracing myself like, 'What am I going to hear today?' But we have really funny stories and what I like about that show is that it exists in a world where there's no COVID, so it's not like we're dealing with that. I'm excited to be done with COVID narratively and be doing shows where it doesn't exist."

Sex Lives is led by Pauline Chalamet, older sister to Timothée. When asked about the possibility of a Chalamet sibling reunion onscreen, Kaling was game. "I mean, I'm a big fan of Timothée Chalamet," she said. "And so are the cast and the writers… He feels a little busy right now! But we are huge fans of his."

But when the series returns, it will be without one of its young stars, Gavin Leatherwood, who recently revealed that he would not be back for season 2.

"At the end of the season, Gavin — who is so good on the show — his character [Nico], basically we find out he gets busted for having this cheating organization at his frat. So it's going to be a little bit of the fallout of that," Kaling shared. "When you're running a cheating ring from your frat, it felt hard to keep that character in the world." She praised Leatherwood's work in the first season, however, adding, "We had a great time with him and he was so good in the show."

Mindy Kaling Takes on Fight to End Pancreatic Cancer
This video is unavailable because we were unable to load a message from our sponsors.

If you are using ad-blocking software, please disable it and reload the page. Mindy Kaling Takes on Fight to End Pancreatic Cancer

On a personal note, Kaling is the official ambassador for the Pancreatic Cancer Action Network, a cause that has added meaning as she lost her mother, Swati Roysircar, to pancreatic cancer in 2012.

"I got involved because 10 years ago my mom was diagnosed with stage 4 pancreatic cancer and she passed away in eight months. And PanCAN was a website that I looked up 'cause I had so many questions," she shared. "We were in so much despair and it had so many resources. Since then, I have tried to support them as much as possible because they give resources to families, and families can find each other. It's just incredible."