Culture secretary Oliver Dowden has insisted ‘no offers have been made’ over new Ofcom and BBC chairmen – with ex-Daily Mail editor Paul Dacre and Charles Moore favourites – but has warned the Governments wants a ‘strong, big person’ to hold Beeb to account

Speaking today Mr Dowden played down either appointment, pointing out there would be a process for appointing both roles, with interviews conducted by an independent panel.

He told BBC One’s The Andrew Marr Show that no offers had been made, adding: ‘We have a formal process for them to go through so I will be launching shortly the competition for the chair of the BBC.’

But it hasn’t stopped ongoing speculation that Mr Dacre has been approached by Boris Johnson to become Chairman of Ofcom, nor the belief that BBC critic Charles Moore could be the next chairman of the corporation.

Speaking on Sky’s Sophy Ridge on Sunday today, Conservative MP Steve Moore said he would be ‘delighted’ to see both appointments.

However the shadow culture secretary Jo Stevens asked why the Government was ‘interfering,’ in the process.

Former Daily Mail editor Paul Dacre has been approached by Boris Johnson to become Chairman of Ofcom, in the latest example of Downing Street’s determination to shake up the Left-wing establishment 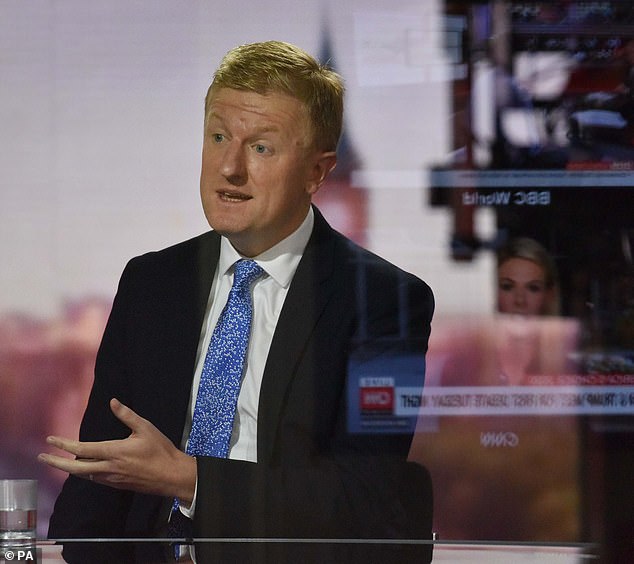 Mr Moore told the programme: ‘Anyone suggesting we were somehow appointing our preferred people needs to look at the records of others who have been appointed to these roles and try to be a bit more realistic about politics and policy.

‘They’re conservatives, they might actually start to look at the way the media functions and ensure  there’s some impartiality.

‘From my point of view time and again during interviews  I’ve felt there was a consensus thought on the side of the broadcaster that was not on the side of moderate, mainstream conservatives.

Speaking on the same programme, Mr Dowden had said the Government wanted a ‘strong, big person who can hold the BBC to account’ to be the broadcaster’s next chairman. 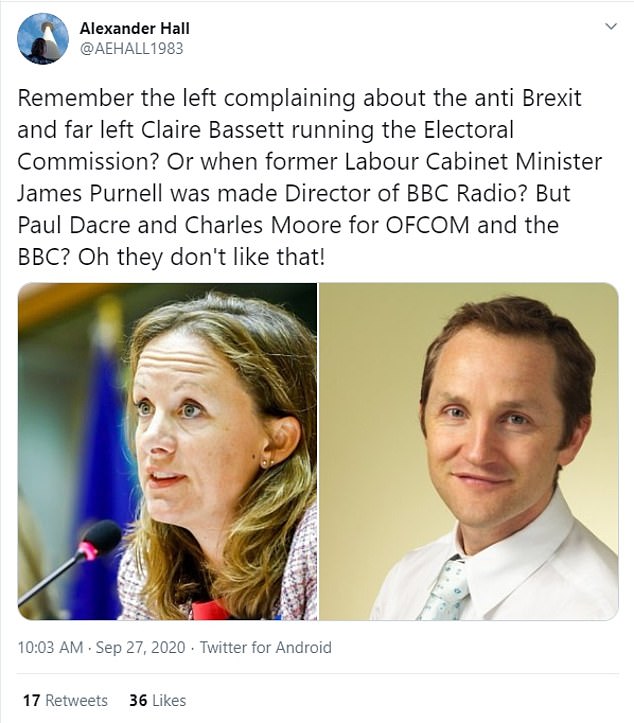 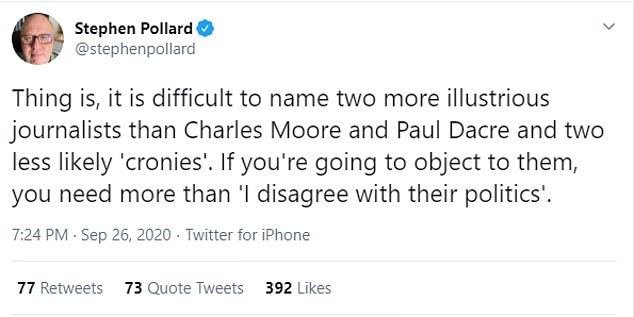 There has been mixed reaction on Twitter to the potential appointments, with Labour MP Chris Bryant declaring it ‘the end of days’

She told Sky News’s Sophy Ridge On Sunday: ‘I think the whole idea of announcing appointments before a process has actually taken place is a bit strange and I think the public will be wondering where the Government’s priorities are on this.

‘Why are they worrying and interfering in an open process and appointment for BBC and head of Ofcom, both two very senior independent public service posts that carry significant salaries?

‘Why are the Government interfering in that sort of thing, when they should be concentrating on getting a grip on test and trace, keeping coronavirus rates under control and getting the economy back on track?’

Ms Stevens added: ‘I’m not going to comment on individuals being trailed as potential heads of the BBC or heads of Ofcom. 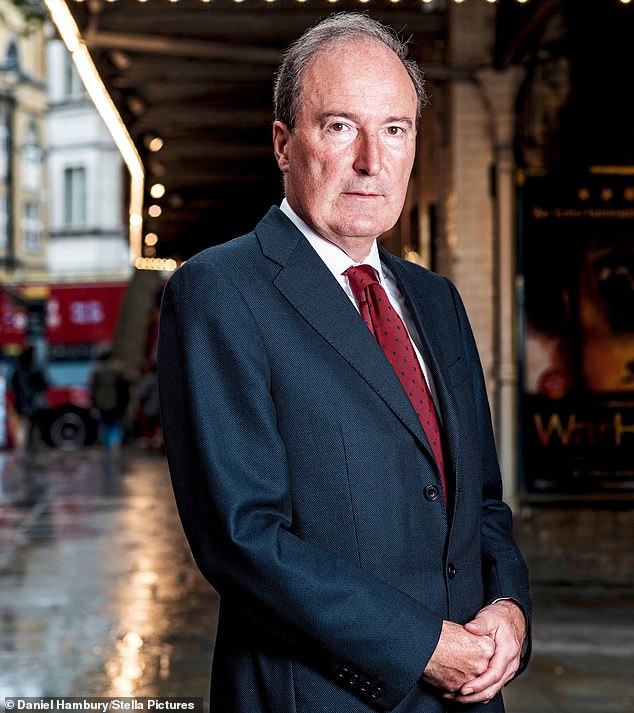 ‘When an appointment is made and announced we’ll take a position and we’ll take a view and comment on it then, but the fact is that the BBC and Ofcom are integral to our national interest, Ofcom regulates the BBC, they should be free from political interference, they should be impartial and the stuff that’s being trailed about these appointments is quite worrying.’

The Mail on Sunday understands that Mr Dacre, 71, who edited the Daily Mail for 26 years until 2018, was wooed by Mr Johnson over drinks at No 10 earlier this year and was asked to consider succeeding Lord Burns.

He is due to step down imminently, after agreeing to go this year rather than complete his four-year term in 2022.

By James Gant for MailOnline

Paul Dacre was the editor of the Daily Mail for 26 years.

The journalist was educated at University College School in Hampstead, north London, before studying at Leeds University.

He had a taste for news from a young age, having edited his school magazine and university student paper.

After leaving Leeds he worked for the Daily Express as a reporter but joined the Daily Mail a decade later in 1980.

He spent a year editing the London Evening Standard before taking up the mantle at the Mail in 1992.

He became well known for his campaigning headlines such as ‘Murderers’ in 1997, where he accused five men of killing Stephen Lawrence.

Mr Dacre also received widespread praise for his role in stopping Gary McKinnon being extradited to the US for hacking into Pentagon computers.

He was personally thanked by the 46-year-old Asperger’s sufferer’s mother for ‘standing up for Gary non-stop for years’.

Ahead of his potential role as chairman of Ofcom, Mr Dacre was formerly a member of the Press Complaints Commission and chairman of the Editors’ Code of Practice Committee.

Next year Mr Dacre will lift the lid on his time at the Mail in a three-part Channel 4 programme called The World According to Paul Dacre.

During ongoing conversations with Downing Street, Mr Dacre said that he was interested, subject to ‘assurances’ about ‘freedom and independence’.

The combination of Lord Moore as BBC Chairman with Mr Dacre at Ofcom would be greeted with dismay at the BBC.

During his tenure at the Daily Mail, Mr Dacre would rail against the bloated bureaucracy and Left-wing bias of the Corporation – but also said that he would ‘die in a ditch’ to preserve it and hoped that it could be saved from itself.

Lord Moore, the former editor of The Daily Telegraph and The Spectator, was revealed by this paper last week to be Mr Johnson’s preferred candidate for BBC Chairman.

He has since accepted an approach to replace Sir David Clementi when he steps down in February and has discussed contractual terms.

However, civil servants at the Department for Culture, Media and Sport have complained to No 10 that the position has to be formally advertised in order to follow ‘due process’.

It comes amid an ongoing battle between Downing Street and Whitehall, with Mr Johnson’s influential adviser Dominic Cummings waging war on the power of civil servants to stymie No 10’s operation.

Lord Moore, 63, is a vehement critic of the Corporation’s ‘Leftwing woke values’ and objects to its guaranteed £4 billion-a-year income from the licence fee.

In 2010, he was fined £262 for not possessing a licence, having donated the equivalent sum to charity in protest at the BBC’s refusal to sack Jonathan Ross for making prank calls with comedian Russell Brand to the actor Andrew Sachs.

Allies of Mr Johnson complain that Civil Service selection protocols introduced by Jeremy Heywood when he was Cabinet Secretary forced candidates to jump through ‘hoops’ designed to ensure the selection of ‘members of the same Left-wing cabal’.

Ofcom, which regulates the broadcasting, telecommunications and postal industries, will be at the centre of Government efforts to curb the powers of online giants such as Facebook, which have used their power to cannibalise the revenues of traditional media firms. 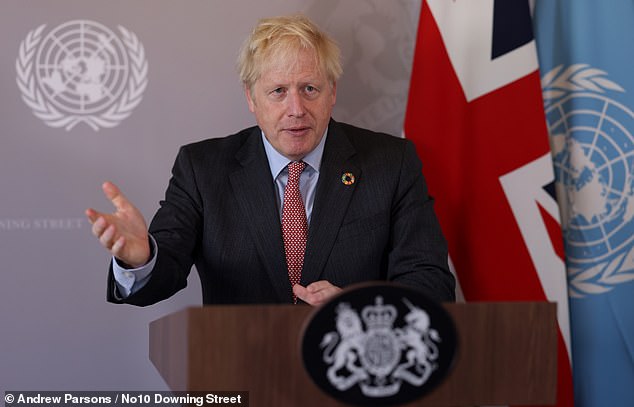 The Mail on Sunday understands that Mr Dacre, 71, who edited the Daily Mail for 26 years until 2018, was wooed by Mr Johnson (pictured) over drinks at No 10 earlier this year and was asked to consider succeeding Lord Burns 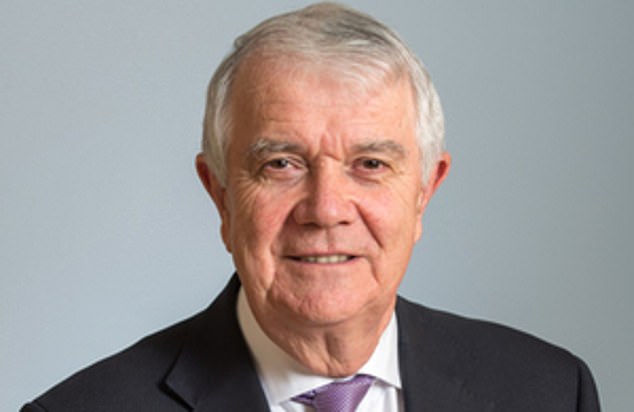 Lord Burns (pictured) is due to step down from Ofcom imminently, after agreeing to go this year rather than complete his four-year term in 2022

By James Gant for MailOnline

He has written three volumes in his biography of former Prime Minister Margaret Thatcher, with the last one – published last year – described by the Sunday Times as ‘one of the great biographical achievements of our times’.

He often appears on television as a commentator on politics and culture and writes for the Telegraph.

During his time editing the newspaper Mr Moore was once Boris Johnson’s boss, but described working with him as ‘a nightmare’.

In one of the more bizarre moments during his editorship, the newspaper was successfully sued for libel by the then MP George Galloway after they claimed he had been paid by Saddam Hussein’s regime.

Ahead of any role at the BBC, Mr Moore was once fined £262 plus costs by Hastings magistrates when he refused to buy a TV licence.

The move came when the Corporation failed to sack Jonathan Ross after the TV host and Russell Brand made offensive telephone calls to Andrew Sachs.

It is understood that Mr Dacre was approached because Mr Johnson wanted a candidate with a history of supporting freedom of expression and the freedom of the press and a determination to rein in the giant digital monopolies.

Mr Dacre, who was instrumental in the editorial launch of Mail Online, the world’s largest newspaper website, is said to be keen to ensure that the online giants pay other media outlets – and local papers in particular – for the content they recycle.

Mr Dacre also masterminded the launch of Metro, Britain’s most widely read paper, and chaired a Government review which successfully recommended reducing the 30-year rule under which state documents were kept secret, reducing the period to 20 years.

Appointing Mr Dacre would represent a culture change for Ofcom: Ed Richards, a former chief executive, wrote a Labour manifesto for Tony Blair and was a former head of corporate strategy at the BBC.

In a further blow for the BBC this weekend, its combative current affairs presenter Andrew Neil revealed that he was leaving the Corporation to spearhead rival GB News, which is expected to start broadcasting early next year.

Mr Neil is a close friend of Sir Robbie Gibb, Theresa May’s former Director of Communications, who The Mail on Sunday revealed last month was leading efforts to raise money for the new channel.

The BBC had been in discussions with Mr Neil about a new interview series, but the deal was said to have been ‘too little too late’ for Mr Neil, who will present the new channel’s flagship evening programme as well as being company chairman.

The BBC Chairman job is formally a Royal appointment, on the recommendation of the Culture Secretary. However, Downing Street will have the final say.

A Government spokesman said: ‘We will launch the application process for the new chair of the BBC shortly.

It is an open recruitment process and all public appointments are subject to a robust and fair selection criteria.’

The process for the Ofcom chairmanship is expected to open next month. 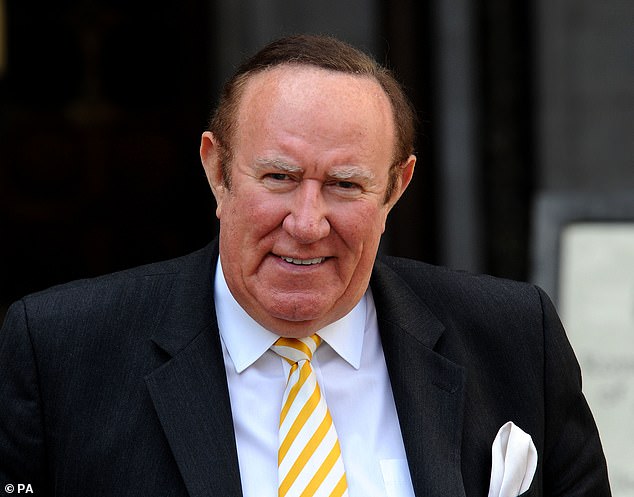 In a further blow for the BBC this weekend, its combative current affairs presenter Andrew Neil (pictured) revealed that he was leaving the Corporation to spearhead rival GB News, which is expected to start broadcasting early next year

The news sparked a Twitter storm, with some hailing it as a win against ‘woke TV types’ but others criticising Mr Johnson.

The journalist Matt Chorley said: ‘Huge news that Donald Trump has chosen Paul Dacre as his pick for the Supreme Court.’

Ex-editor of the Sun Kelvin MacKenzie put: ‘Fantastic news that No.10 intend to appoint Daily Mail’s great Editor Paul Dacre to be the new chairman of the media regulator Ofcom. Woke TV types will be seeking fresh careers.

‘First time the Liberal grip on broadcasting has been broken in my lifetime with the appointment of ex-Mail editor Paul Dacre as chairman of Ofcom and ex- Telegraph editor Charles Moore as chair the BBC. A doco showing woke producers cr***ing themselves will win Baftas.’

Director of Council for Arab-British Understanding Chris Doyle commented: ‘Charles Moore and Paul Dacre will try to kill off the BBC and have great fun doing it.’

Lord Adonis added: ‘If the story about Paul Dacre and Charles Moore to run Ofcom & the BBC is true, then this is Cummings operating straight out of the Trump playbook with the intent to undermine our democratic institutions.’