Britain’s streets may soon be littered with rubbish after bin collections were cancelled across the country in the face of severe staff shortages.

Councils in Manchester, Essex, Somerset and Buckinghamshire this weekend announced reduced services or a complete suspension of waste collections as staff numbers were slashed due to positive Covid tests and isolation.

Chelmsford City Council have cancelled three days’ worth of food waste collections after 23 members of staff called in sick or unable to work, while 1,000 recycling bins were not collected in North Somerset.

Rising Covid cases in recent weeks as a result of the Omicron variant have led to widespread worker absences in several industries, prompting the government to warn public sector leaders to prepare for up to a quarter of their staff being unable to work.

It comes as more than 110,000 of the NHS’s 983,000 staff in England missed the turn of the year due to illness, according to the institution’s own dashboard.

Almost 50,000 of these employees were self-isolating after testing positive for Covid-19.

137,583 lab-confirmed Covid-19 cases were recorded in England and Wales as of 9am on Sunday, the Government said.

This was down on the 162,572 cases recorded in England alone on Saturday. 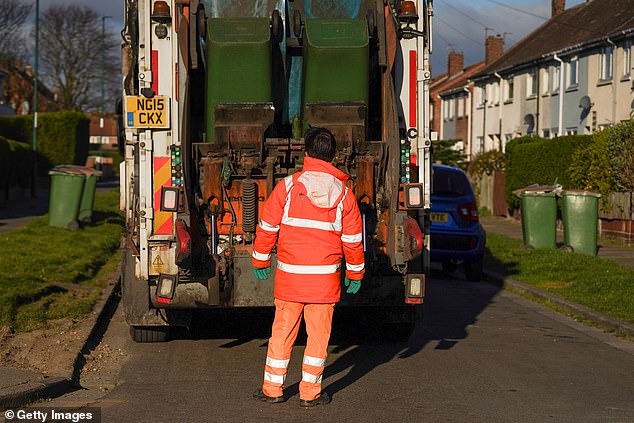 Councils in Manchester, Essex, Somerset and Buckinghamshire this weekend announced reduced services or a complete suspension of waste collections as staff numbers were slashed due to positive Covid tests and isolation 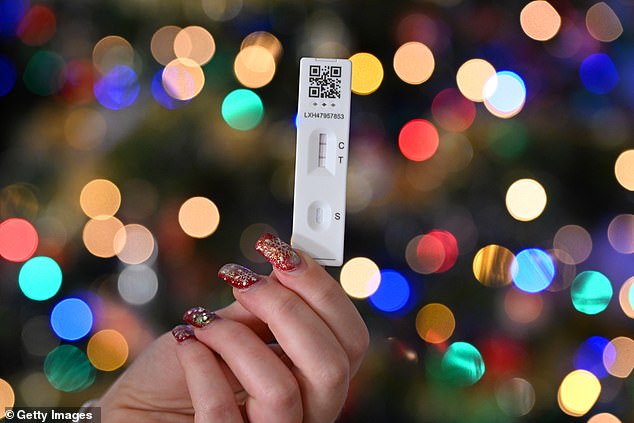 Rising Covid cases in recent weeks as a result of the Omicron variant have led to widespread worker absences in several industries, prompting the government to warn public sector leaders to prepare for up to a quarter of their staff being unable to work. 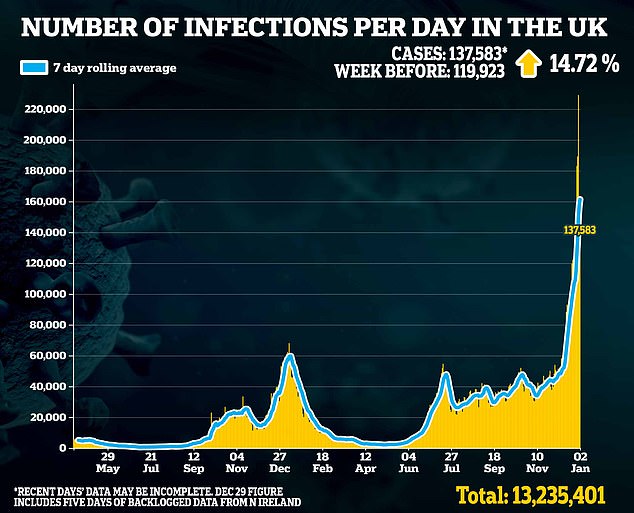 Health minister Ed Argar said the Government was ‘doing the responsible and sensible thing’ by asking the public sector to prepare for a worst-case scenario of up to a quarter of staff off work.

It was reported on Sunday that United Lincolnshire Hospitals NHS Trust had declared a ‘critical incident’ linked to ‘extreme and unprecedented’ staff shortages.

And in Wales, Swansea’s Morriston Hospital said it could provide only a ‘limited service’ in its emergency department over the Bank Holiday weekend owing to staffing pressures ‘worsened by Covid’. 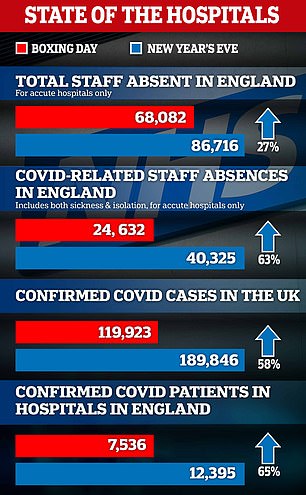 Chris Hopson, the chief executive of NHS Providers, which represents health trusts, said on Saturday that staff were working ‘flat out’ and that the NHS was under ‘arguably more pressure’ compared with this time last year.

Ministers have said there is nothing in the data to suggest further restrictions will be needed imminently.

But the Government will take extra precautions in schools – asking secondary students to wear masks in classrooms once again.

It comes as MPs are due to return to the Commons on Wednesday following the Christmas recess. The Government is set to review its Plan B measures on the same date.

Compared to pre-pandemic levels, the figures for NHS staff off sick on New Year’s Eve showed a five percentage point rise, with December 2019 only having 4.69 per cent of staff off ill in total.

The figure was also higher than those off over Boxing Day, when fewer than 25,000 were out of work due to the virus.

One NHS boss warned operations could start being cancelled from next week if hospitalisations surge and said the country will need to bring in more restrictions.

The chief executive of NHS Providers said ‘the next few days are crucial’ and the health service was under ‘arguably more pressure’ than this time last year.

It comes as the Omicron variant continues to wreak havoc across the country as infections continue to rise, forcing people to lock themselves away for a week.

The 110,000 figure for NHS staff off over New Year’s Eve was for all the health service’s workers. The NHS dashboard showed by December 31 86,716 were off with illness at acute trusts – a leap of 27 per cent.

This was a huge leap on Boxing Day, when just one in 40 NHS hospital staff were unavailable to work because of Covid. 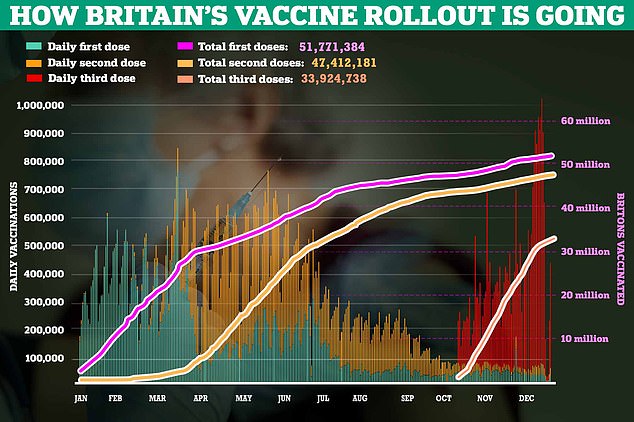 But with 983,000 working in NHS hospitals in England, according to official workforce statistics for 2021, it means only 2.5 per cent of the workforce – or one in 40 – were off due to Covid towards the end of the month.

Meanwhile, non-Covid sickness absences actually fell over the same period, from 47,628 on December 1 to 43,450 on Boxing Day.

As a result, overall sickness-related absences among NHS hospital staff only rose by 13 per cent in December – from 60,136 on the first of the month to 68,082 on December 26.

Consequently, around 93 per cent of hospital staff were still fit and healthy from a work point of view at Christmas. However, the picture is varied between England’s 138 NHS hospital trusts.

All had higher than average Covid-related absences.

Meanwhile, Education Secretary Nadhim Zahawi outlined a battery of Covid measures for schools in a Twitter thread on Sunday, saying he wanted to offer ‘reassurance’ before the start of term.

In an open letter, he urged education leaders ‘to do everything in your power to protect face-to-face learning’, using all of their available teaching and non-teaching staff to cater for students on site.

But he indicated that some remote learning may need to take place. 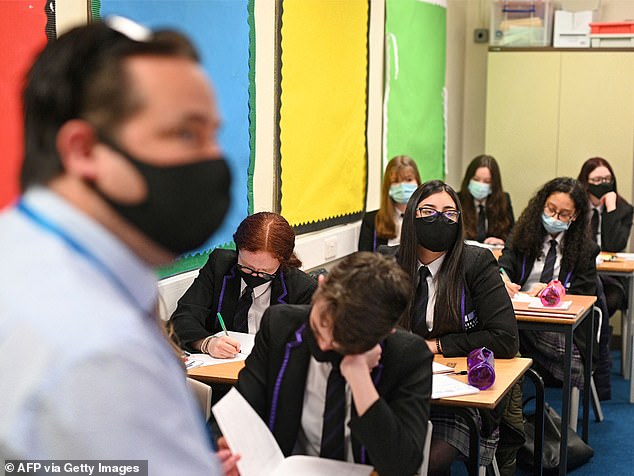 The most controversial move for schools is the reintroduction of face coverings in classrooms for students in year 7 and above.

Meanwhile, all secondaries have been asked to provide an on-site test for students ahead of their return to the classroom.

An additional 7,000 air cleaning units will be provided to schools, colleges and early years settings to improve ventilation in teaching spaces.

And 12 to 15-year-olds are being encouraged to get fully vaccinated with two jabs and 16 and 17-year-olds are now eligible for a booster dose.

The news on masks was met with concern from Robert Halfon, the chair of the Commons education select committee, who said he feared the move could damage children’s mental health.

But Wes Streeting, the shadow health secretary, said he would rather have face coverings worn in classrooms than children stuck at home. 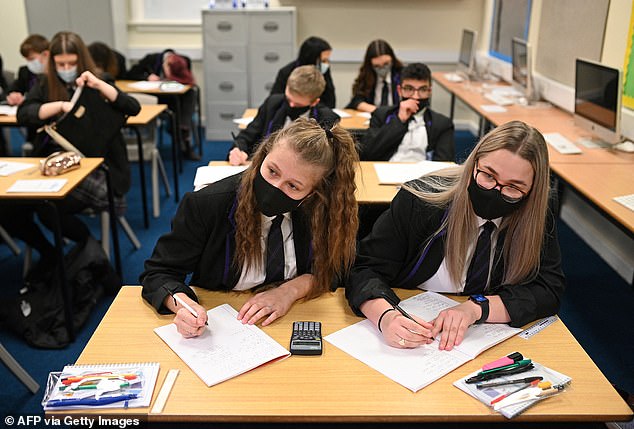