Home » World News » Mississippi hunter cornered by 4-foot rattlesnake hiding in deer stand: 'There was no way to get away'

Mississippi hunter cornered by 4-foot rattlesnake hiding in deer stand: 'There was no way to get away'

A Mississippi man went hunting for deer on Dec. 28, but he ended up with an impressive rattlesnake carcass instead.

Mack Ginn arrived at his small blind – which is propped up on cinder blocks – around 6 a.m.

"The blind has been there a long time. It's a small blind; maybe 4 by 4 (feet). You have just enough room to walk in, sit, and swivel around,” Ginn told USA Today.

In addition to his hunting stand being small, Ginn also said that the floor, which was at one time open, consisted of a wooden shipping pallet.

Just before 8 a.m., Ginn said he heard something while sitting in the blind.

"I heard a rattle. It echoed in the blind and sounded like it was in the trees,” he said, noting he initially thought it was cicadas before realizing they would not be active in late December.

Although the experienced hunter had never heard a rattlesnake rattle, he began wondering if that could be the loud noise he was hearing.

Sure enough, when the hunter looked down at the pallet, he saw a 4-1/2-foot timber rattlesnake peeking up through the slats. 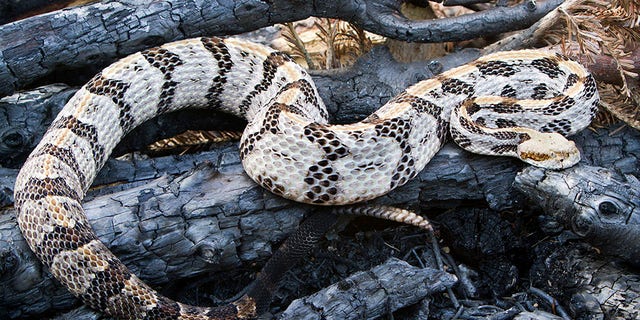 Fortunately, hunter Mack Ginn only sustained ear ringing as an injury after shooting his high-powered rifle at the snake which, surprisingly, never bit him.
(iStock)

"My foot was on top of the pallet only a couple of inches from the snake. My first thought was to get away. I literally jumped into the chair because there was no way to get away,” he said.

In the tiny square, Ginn was trapped — and his only option was his rifle loaded with a .270 Winchester cartridge, USA Today reported.

Ginn aimed, fired and missed. On his second try, the man managed to shoot the snake’s head as it was striking.

"My ears rang most of the day," Ginn said.

"There's no telling what it would have measured on a decibel meter,” he added.

Fortunately, the ringing seemed to have been Ginn’s only injury, as the snake, surprisingly, never bit him.

Ginn did take a powerful lesson away from the scary incident: He’s installing a solid wood floor and sealing it.

"I won't be sitting on a pallet again, that's for sure,” he told USA Today.