Moment 'fly-tipping' driver tries to run over witness filming him

Dramatic footage shows the moment a man is almost run down by an alleged fly tipper after he attempted to catch him in the act.

The incident, which took place in West Green, London, saw the man narrowly avoid being mown down by the driver who charged at him in a van.

Video of the moment appeared on social media on Friday after the man tried to film the van owner apparently dumping rubbish in a street. 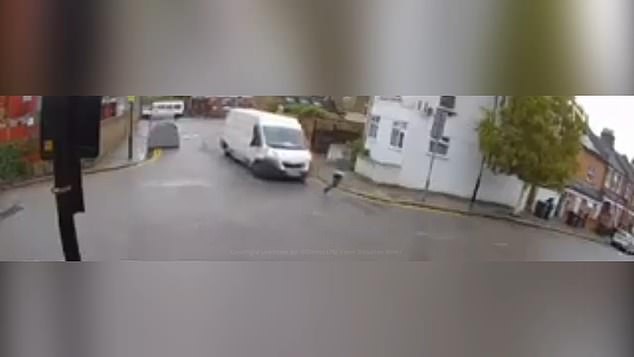 The video was shared on Twitter and has been seen more than 11,000 times with viewers sharing concern about the apparently extreme measures taken by the van to avoid filming

The video shows the man crossing a street towards a white van parked opposite him which is said to have been fly tipping.

Holding his phone, the man proceeds to record the van when it suddenly accelerates towards him.

The van’s engine can be heard roaring as the driver moves at full throttle towards the person recording the incident.

He dodges to the right and is narrowly missed by the van, which shows no signs of slowing as it screeches round the corner.

The person recording did not suffer any injuries, but managed to capture the end of the incident from their perspective.

The short clip shows the van careering towards the camera, before speeding away with its side door hanging open.

The footage was posted on social media with the caption: ‘A van driver was fly tipping and tries to run over the person recording him this morning.’ 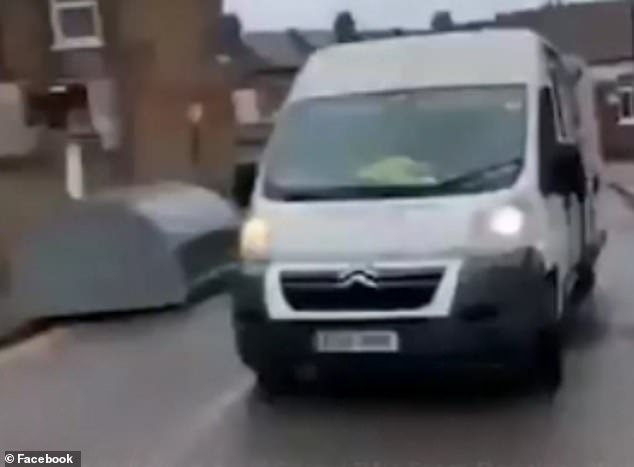 The video which has been posted to Twitter has been viewed over 11,000 times and has alarmed social media users.

@Millu-milly2020 commented: ‘There are some serious nutters out there.’

@modelcitzenUK- Tweeted: ‘That’s attempted murder! Did they get the number plate?’

Another user, @csrussell29 condemned the man who recorded the incident saying: ‘Geezer should keep his nose out of it, that’s not his job to catch fly tippers.’

The Metropolitan Police and Haringey Council have been contacted for comment.