Moment schoolboy thugs armed with metal poles attack each other

This is the moment a gang of schoolboys attacked each other with metal poles in broad daylight in front of people’s homes.

The boys clashed in Small Heath, Birmingham with police later saying that a 16-year-old was attacked by a group of others.

The shocking violence spilled into the street and an elderly woman attempted to break up the fight, which happened on Tuesday, May 21.

One thug – dressed in a grey hoodie – can be seen hitting a victim with a pole while supported by an accomplice.

He smashes the boy seven times across his head and body before the lady intervenes.

On the driveway next door, another teenager pins a boy against a house before hammering him again and again with a large metal pole.

There is a lull in the violence before a boy dressed in a red T-shirt is targeted in a three-on-one attack.

He eventually manages to escape.

Drivers stop and beep their horns in an attempt to break up the fight and screams of ‘m**********’ can be heard as students in white school shirts and backpacks sprint away from the weapon-wielding gang.

The fight took place after school at around 4pm, witnesses said and the footage has been widely circulated on social media. 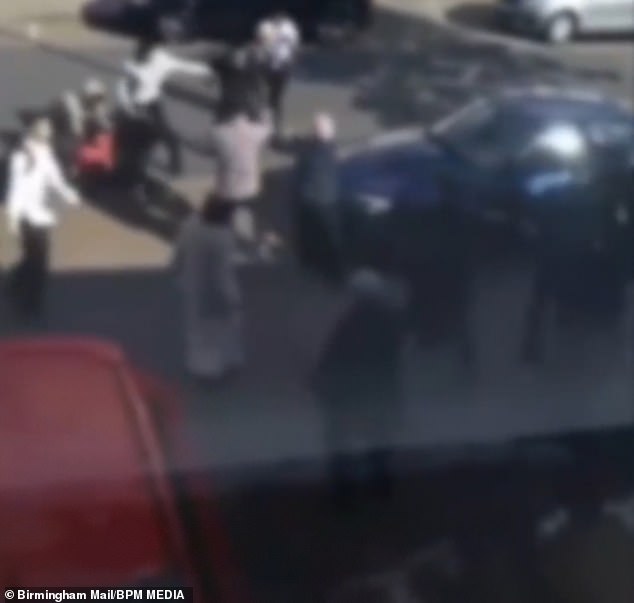 The boys clashed in Small Heath, Birmingham with police later saying that a 16-year-old was attacked by a group of others 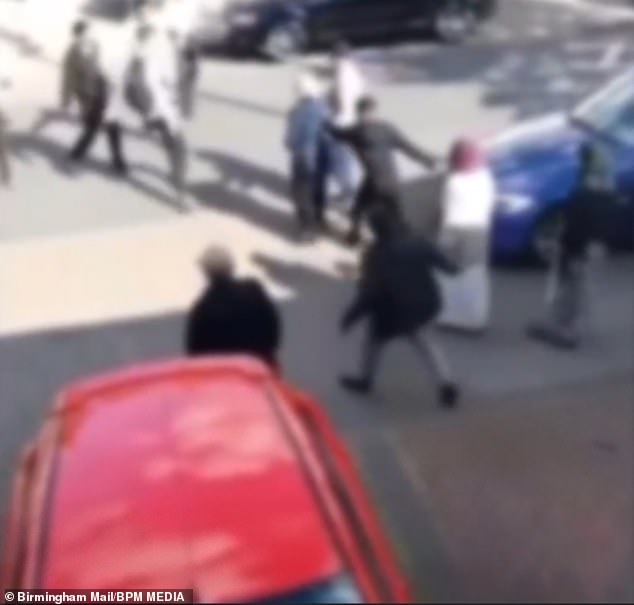 One Facebook user said: ‘The very elderly lady stepped into stop it, if them lads had some respect for their own mother or grandmother, they would have stopped at that moment, no matter what the situation was.’

While another user commented, saying: ‘Parents nowadays just take the easy option and let their children make the rules!

‘A child will have a tantrum and the parents can’t be bothered to deal with it, so they give in. Thats why you’ve got these crazy brats!’

A spokesman confirmed officers were alerted to an initial incident 10 minutes away outside a school on Yardley Green Road just after 3pm.

In a statement, West Midlands Police said: ‘Officers were alerted to disorder on Yardley Green Road in Small Heath just after 3pm yesterday afternoon (Tuesday 21 May) where a group of people approached a 16-year-old boy and punched him outside a school.

‘The boy was taken to hospital to be checked over after sustaining a facial injury which is not thought to be serious.

‘It is believed the boy and his family were then involved in a verbal altercation just after 7.30pm in a nearby road upon returning from hospital.

‘A number of people who are known to one another have been served with police warning notices for their involvement in the disorder and associated incidents.

‘The two neighbouring families on the road are now also considering resolving the dispute through a restorative justice programme.’