Rescue crews in India used boats and helicopters on Saturday to reach areas hammered by days of monsoon rains – coming at nearly 2.5 centimetres an hour at one weather station – that submerged homes and triggered landslides in the latest battle against extreme weather around the world. At least 125 people were killed, Indian officials said.

Emergency teams confronted thick sludge and debris in attempts to evacuate people across hard-hit Maharashtra state, which includes Mumbai. Thousands of trucks were stuck on the partly submerged highway between Mumbai and the technology hub of Bangalore. Major rivers were still in danger of rising further, Reuters reported. 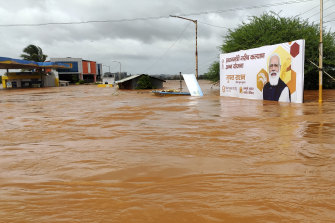 The scenes in India echoed disasters around the world caused by deadly floods in recent weeks in China’s central Henan province and in Germany and Belgium.

Climate scientists say that these ravaging global floods should serve as a wake-up call for leaders to take action on climate change. While monsoon rains are a regular occurrence in India, a warmer atmosphere retains more moisture, which causes heavy rainfall during storms, some experts note.

“The rain fury that lashed Mahabaleshwar . . . is a strong warning against any more tampering with the ecologically fragile Western Ghats,” Indian economist Devinder Sharma wrote on Twitter on Friday, referring to a chain of mountains running parallel to India’s western coast.

The Maharashtra city of Kolhapur – which sits at the banks of one of the region’s most important waterways, the Panchganga River – was almost totally submerged, Times of India drone footage shows.

A Thursday landslide flattened most homes in the village of Taliye – 180 kilometres south-east of Mumbai – where the death toll reached at least 49, according to the Times of India. Dozens of people remained missing.

“The possibility of rescuing them alive is thin as they’ve been trapped in mud for more than 36 hours,” Reuters quoted a government official, who spoke on the condition of anonymity as he was not authorised to speak with media. 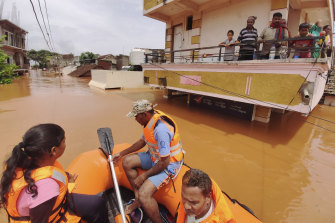 People stranded on a balcony in flood waters watch as others are rescued at Kolhapur in western Maharashtra state.Credit:AP

“No advance disaster alert was given to the villagers,” said Milind Gangawane, a Taliye resident interviewed by the Times of India. “Our tribal hamlet has 45 houses with a population of over 120. Boulders from the hill fell from a height of 100 feet [30 metres] in the landslide.”

Around 90,000 people have been affected by the floods, the Maharashtra government said in a statement, Reuters reported. The hill station of Mahabaleshwar, south of Mumbai, recorded its highest ever rainfall: 60 centimetres in 24 hours.

The chief minister of Maharashtra, Uddhav Thackeray, on Friday wrote on Twitter to the people of Taliye: “You have faced a major tragedy. Hence, right now, you just need to take care of yourself. Leave the rest to the Government. We will ensure that everyone is rehabilitated and compensated for their losses.”

Prime Minister Narendra Modi wrote in a Friday tweet that he was “anguished by the loss of lives due to a landslide” in Maharashtra. “The situation in Maharashtra due to heavy rains is being closely monitored and assistance is being provided to the affected.”

Other parts of the world have experienced other extreme weather events – heat waves, wildfires and drought.

India’s Meteorological Department warned of extremely heavy rainfall through the weekend in the Maharashtra region. Citizens staying close to rivers were advised to take precautions – but “alternate arrangements must be made” for sites with coronavirus patients, wrote Thackeray.

In some areas, the rain intensity decreased on Saturday, causing a slight fall in river levels, the Times of India reported.

The typhoon is set to hit the east coast province of Zhejiang even as central China is still reeling from record flooding that killed at least 58, cut off power and forced the relocation of more than 1 million people.

“We will make every effort to ensure the safety of people’s lives and property, and do everything to minimize disaster losses, and strive to achieve the goal of no deaths and few injuries and economic losses,” said Yuan Jiajun, the Zhejiang province Communist Party secretary, during an inspection of preparations on Saturday, official media reported.