Monster ‘Toadzilla’ cane toad weighing a record 2.7kg is found on a hiking trail: ‘It’s like a football with legs’

Rangers have been left stunned after discovering a giant cane toad weighing 2.7kg in a national park.

The 25cm-long pest, dubbed Toadzilla, was found by Department of Environment and Science rangers who were clearing a hiking trail in Conway National Park in north-west Queensland last week.

‘[It looked] almost like a football with legs,’ Ranger Kylee Gray said. 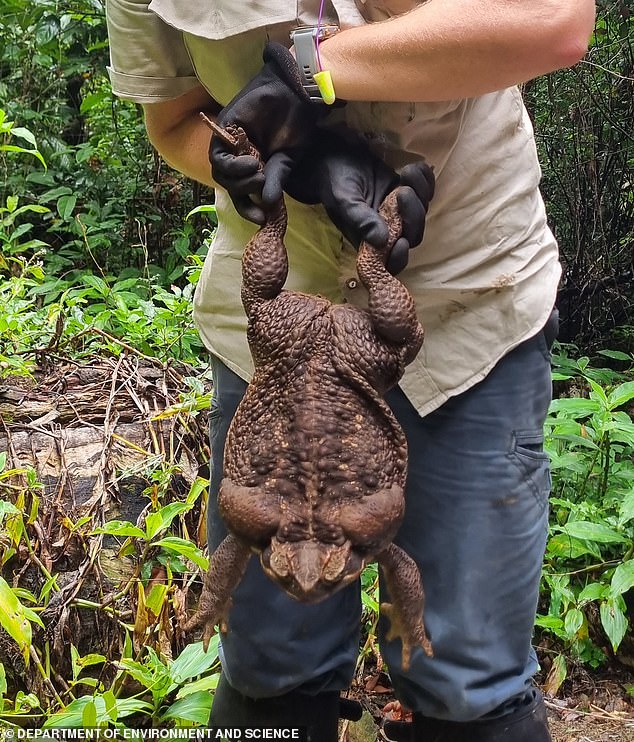 A giant cane toad dubbed Toadzilla (pictured),has been found by Department of Environment and Science rangers in Queensland last week

A cane toad’s diet usually involves insects and reptiles, but they are opportunistic eaters and will ‘eat anything that fits in their mouths’.

This means that when a cane toad grows larger its diet expands to small mammals, birds or even pet food, according to the Department of Environment and Science.

Ms Gray found the monster toad right by her feet when a red bellied black snake crossing their path forced them to stop their vehicle.

‘I reached down and grabbed the cane toad and couldn’t believe how big and heavy it was,’ Ms Gray said.

According to Guinness World Records, the current record holder for largest cane toad, named ‘The Prince’, was recorded in 1991 as 35cm long and weighing 2.65kg.

‘We didn’t get Toadzilla on certified scales … so we’re sort of kicking ourselves,’ Ms Gray said.

Cane toads can live up to 15 years in the wild and Ms Gray suspects ‘this one has been around a long time’. 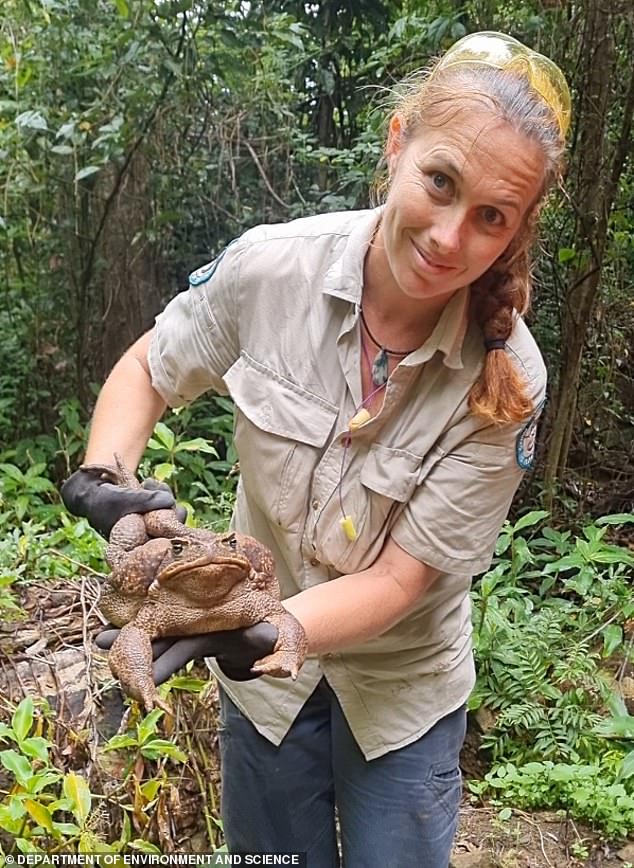 Rangers unofficially weighed the toad at 2.7kg, heavier than the 1991 Guinness World Record Holder at 2.65kg

The toad was removed from the park by rangers to be euthanised and sent to the Queensland Museum in Brisbane where it will be officially weighed and studied.

Recognised by the Commonwealth Government in 1991 as a key threat to the nation, cane toads have ravaged tropical ecosystems due to their large size and extreme toxicity.

They were introduced in 1935 to cull crop-damaging cane beetles, but were unsuccessful.

Instead their population exploded with females laying around 30,000 eggs every mating season.

The species competes with native fauna for shelter and food, causing extinctions, and also kills dogs and birds that try to eat their poisonous skin.

‘We’re pleased to have removed her from the national park,’ Ms Gray said.

Introduced into Queensland in 1935 to control the cane beetle

Obtains a large size, up to 26cm and weighing 2.5kg, but specimens of this size are rare

Female cane toads can produce up to 30,000 eggs in a season

Colonise a wide range of habitats – though not widely spread through rainforests, but will penetrate these areas along roads and walking tracks (as per this find)

Compete with native species for sheltering sites and food resources

While they primarily feed on insects, they are opportunists and will also take small vertebrates