One of those to attend the vile demonstration could also be heard shouting for political editor Robert Peston. 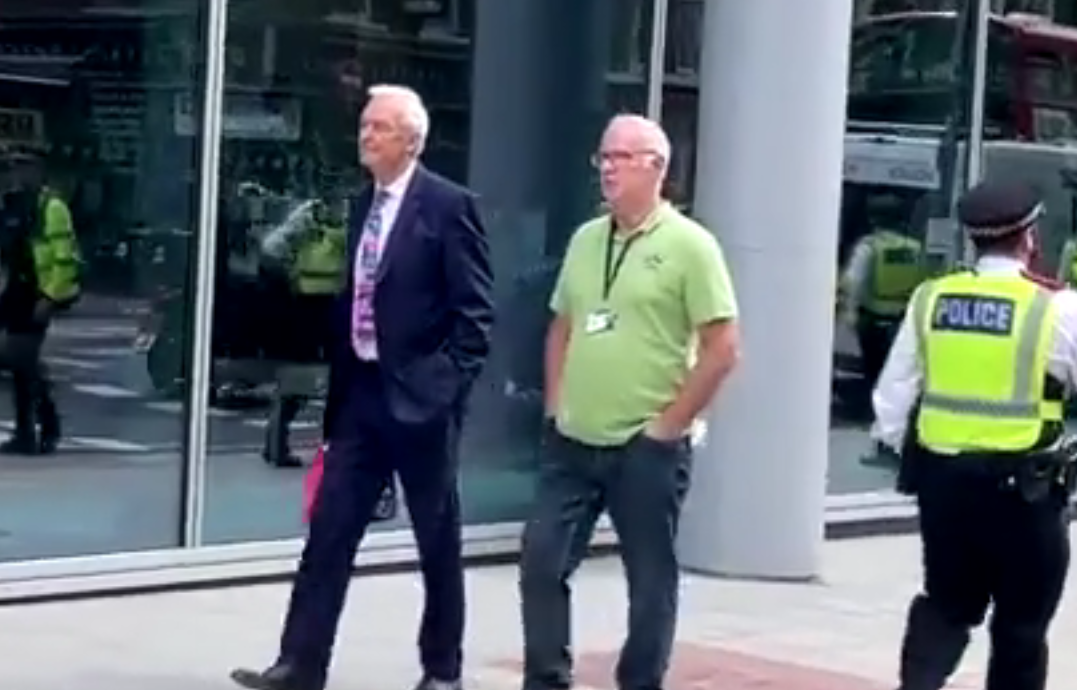 Cops in marked vans rushed to the scene after the campaigners shouting "They're coming for our children" forced their way into the building today.

Another of those at the demo could be heard telling the crowd: "If anyone’s seen the film Wolf of Wall Street, 'We’re not f***ing leaving’."

Channel 4 newsreader Snow was seen walking towards the studios – before suddenly spotting the mob outside and stopping in his tracks.

Video from the scene shows police in high-vis jackets and masks standing nearby while the protesters push in through a set of revolving doors.

Footage filmed inside shows a man speaking through a megaphone while protesters hold their phones aloft and cheer.

Some at the scene say one of those at the demo shouted: "Where's Peston?

Footage has been posted online from activist group StandUpX with the caption "refusing to leave ITV London until we get answers".

In the video, one of those at the protest can be heard arguing with a policeman as he waves a camera phone in the officer's face.

He says: "Concerned parents – the whole country is with us.

"The whole country is upset. We want answers… we don't care about getting arrested, mate.

'YOU'RE GOING TO HELL'

"I'll put my life down for my kids. They're losing their freedom and you lot are enforcing it.

"You'll all go to hell, trust me. I don't know how you can go home and sleep at night."

Other clips show scores of people without masks on milling around while a man in a black t-shirt demands that reception staff find him someone to talk to.

The man can be heard saying: "Where's the boss?

"Who's in charge today? We want to speak to them.

Eye-witness Paul Brown says detectives "couldn't stop them and don't seem to have a plan to get them out". However, witnesses say officers have blocked off all entrances and exits to the building.

Newsreader Lucrezia Millarini was on air when the mob made their way inside.

She tweeted: "Police at our building as anti-vaxx protestors get into the foyer.

"Luckily today’s @itvnews was not disrupted."

Police this afternoon said: "Officers are responding to a demonstration at a private premises on Gray’s Inn Road, Camden, where people have unlawfully gained access to the building.

"Officers are on scene engaging with building security and removing those who have gained entry."

Today’s protest comes just a fortnight after a group stormed the BBC’s former headquarters – despite the broadcaster having moved from the building years ago.

It's understood that protesters hold the BBC responsible for promoting Covid jabs.