Mother is forced to work six days a week to rebuild her shattered home after cowboy builders cheated her out of £80,000 and left her with death trap extension

A heartbroken mother has told how she is working six days a week to rebuild her shattered home after cowboy builders cheated her out of almost £80,000.

Rogue traders Kyle Muir, 26, and Reece Lloyd, 30, left nurse Vicki Mileham, from Belton, near Great Yarmouth, with a deathtrap extension so unsafe that building inspectors told her to tear it down.

Almost two years after abandoning the job in early 2020, the pair have pleaded guilty to cheating customers out of a combined £116,000.

Ms Mileham, 52, had signed a contract with Muir and Lloyd in November 2019, planning to add a fourth bedroom and an en suite bathroom to her three-bed semi, which she shares with twin 15-year-old daughters Ruby and Ellie.

Lloyd and Muir quoted her £32,000 and said the two-storey build – including a new fitted kitchen and bathroom – would take around three months.

But within weeks Muir walked off the job after falling out with his business partner, and Lloyd failed to show up for weeks on end. 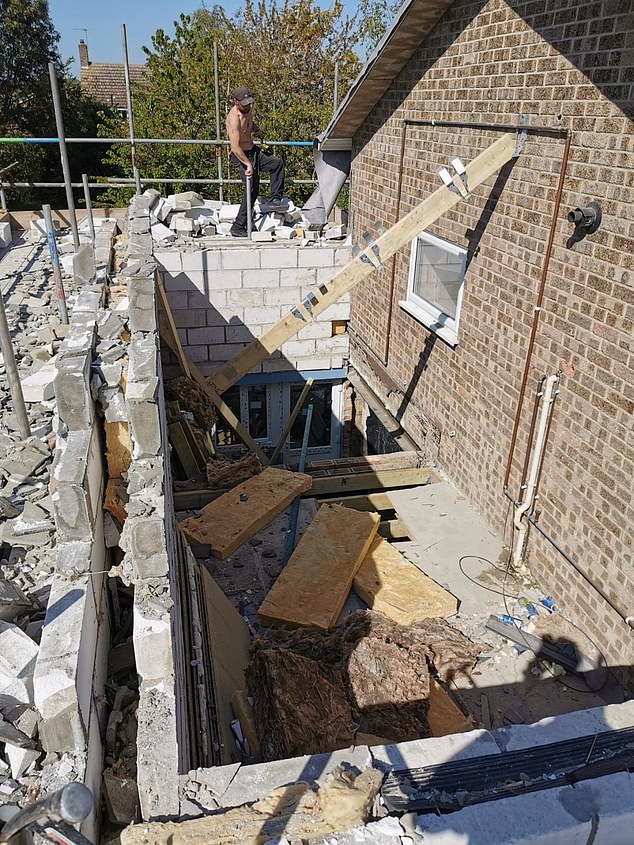 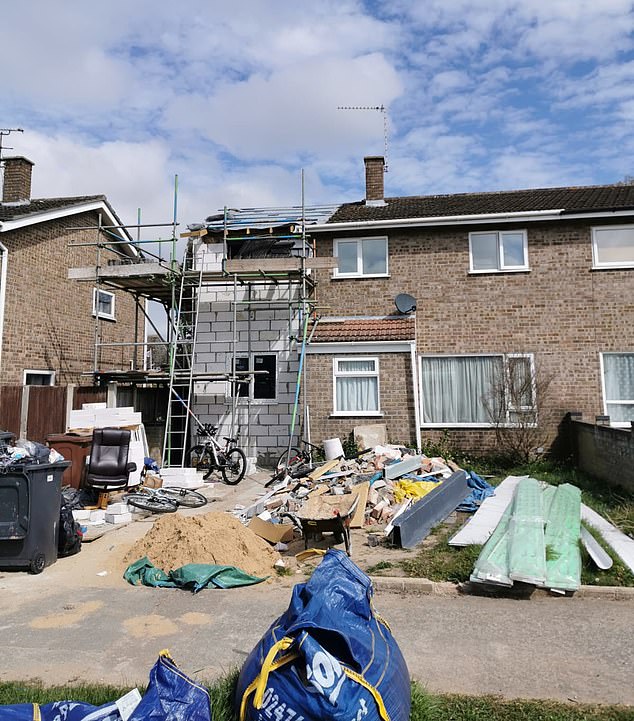 Rogue traders Kyle Muir, 26, and Reece Lloyd, 30, left nurse Vicki Mileham, from Belton, near Great Yarmouth, with a deathtrap extension so unsafe that building inspectors told her to tear it down

Ms Mileham said: ‘When he did eventually turn up in early 2020 he told me the job had gone over budget and he needed another £20k for materials.

‘The work seemed to go nowhere over the following weeks but it was always the same story – he needed more cash.’

Ms Mileham remortgaged her home, maxed out credit cards and took out loans to pay for materials, handing over almost £80,000 in total by March 2020. 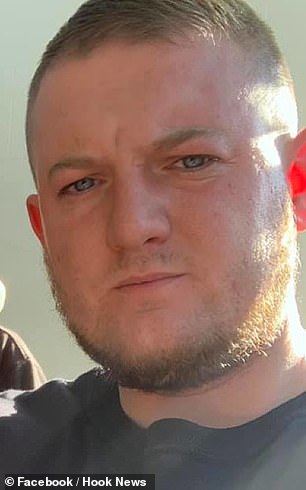 Muir, from Yarmouth, admitted conning six customers – including Ms Mileham – out of £48,300 by failing to complete work, and pleaded guilty to seven fraud charges

But Lloyd then abandoned the project just four months after starting, leaving Ms Mileham with a saggy roof, wonky brickwork and a cavity wall built around a gas pipe.

Ms Mileham said: ‘They hadn’t even laid any foundations – they’d started building the extension on bare earth. They’d used the wrong cement and the wrong supports for the roof. Interior bricks had been used on the outside of the building and were joined with the wrong cement – they were basically balanced on top of each other.

‘A supporting girder was wedged in place with wooden blocks, and I was left with a gaping hole in the wall where they’d knocked through. The only thing separating us from the wind and rain was a few plastic sheets.

‘In a way it’s a miracle the work stopped when it did because if they’d ever managed to finish the extension, it would have fallen down at some point in the future and might have killed us.’

With the UK in Covid lockdown, Norfolk County Council had a building inspector survey videos and photos of the extension.

Black mould and cracks appeared on Ms Mileham’s walls as rain poured through her leaky roof.

And with her kitchen reduced to a shell – with no electricity or running water – she spent months washing up in her bath between cooking meals in her living room.

Generous neighbours pitched in to help demolish the botched extension and set up a Go Fund Me to raise cash towards a rebuild. 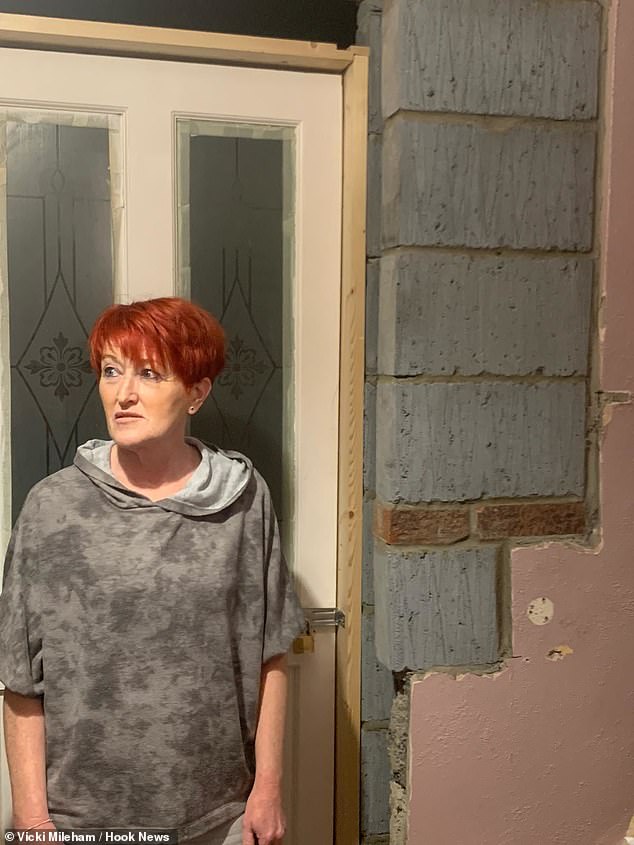 But Ms Mileham was forced to sell personal possessions – even selling her winter coat – to scrape together another £17,000 to make her home habitable.

Lloyd wrote to her in September 2020 to apologise, blaming the pandemic for his failure to finish the job and warning he would file for bankruptcy if she pursued a claim against him.

Ms Mileham and partner Asher Paniri – who she met when he volunteered to help with repairs – exposed Muir as a cowboy on Facebook.

He retaliated by leaving voicemails threatening to ‘smash down’ Ms Mileham’s house, and told Asher he would stab him.

Muir – who has 67 previous convictions – was convicted of harassing Vicki and Asher in October 2020 when he also admitted possessing an offensive weapon and battering his former partner.

He was jailed for 12 months in January last year.

By last summer he was back on the streets and Great Yarmouth Magistrates’ Court heard earlier this month that his crime spree continued under the guise of ‘The Cladding and Roofing Company’.

Muir, from Yarmouth, admitted conning six customers – including Ms Mileham – out of £48,300 by failing to complete work, and pleaded guilty to seven fraud charges.

Besides Ms Mileham’s extension, Muir had charged another customer VAT despite not being registered. 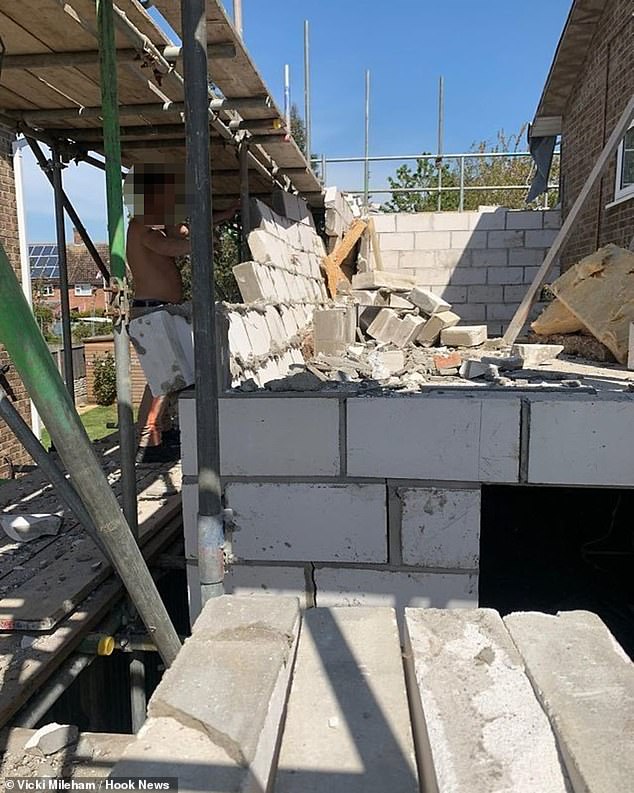 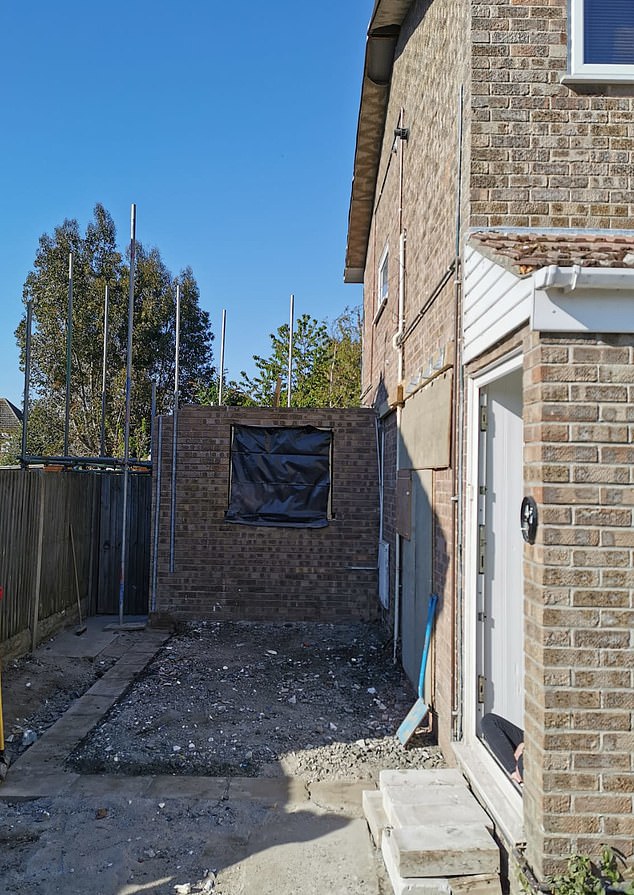 Demolished: Just the footings are left of Vicki Mileham’s botched extension after a building inspector advised it should be torn down

And Trading as The Cladding and Roofing Company he took money for two jobs that never started.

In a prosecution brought by Norfolk Trading Standards, Great Yarmouth Magistrates’ Court heard he pocketed £67,300 of Ms Mileham’s cash but completed work worth only £5,000, with another £2,000 spent on kitchen units.

Both Muir and Lloyd are due to be sentenced at Norwich Crown Court on a date to be fixed.

The pair face a Proceeds of Crime Act hearing and could be jailed for their crimes.

Ms Mileham is now pinning her hopes on the hearing to claw back her lost cash.

The mother-of-two said: ‘I sold practically everything I owned and I’m working six-day weeks to keep a roof over our heads.

‘Two years down the line, I’ve been left trying to cover two mortgages.

‘Seeing Muir and Lloyd convicted feels like a bit of a win but it doesn’t change anything in a practical sense. They need to do the decent thing and pay me back.’

Ms Mileham estimates it will take her another three years to remedy their shoddy workmanship.

‘I’ve finally managed to get the outside of the extension rebuilt, but the inside is far from done,’ she said.

‘We’ve had to go backwards because of all the damage they did to the existing house – all the ceilings upstairs needed replacing. My hall, stairs, landing and living room all need replastering and reflooring.

‘I’ve only managed to get half the kitchen and half the bathroom done – at the moment it’s stop-start, as and when I can afford it.

‘Personally I would rather Muir and Lloyd remained free so they could earn money to pay me.’