A woman has posted shocking pictures of the injuries she says she suffered at the hands of her abusive boyfriend, as he is jailed for 14 months.

Jenna Hurley revealed the severe bruising to her eyes, the back of her head and all over her back.

The mother-of-two was attacked by Mark Whiteside, who is now serving time for assault. 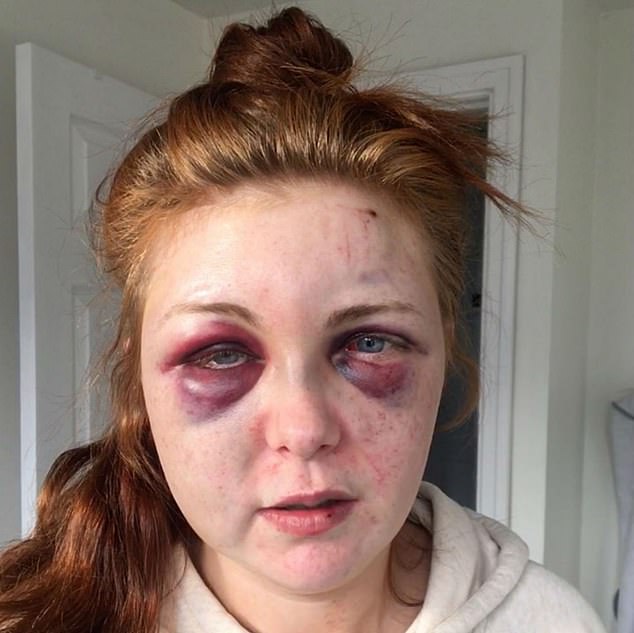 Jenna Hurley revealed the severe bruising to her eyes, the back of her head and all over her back 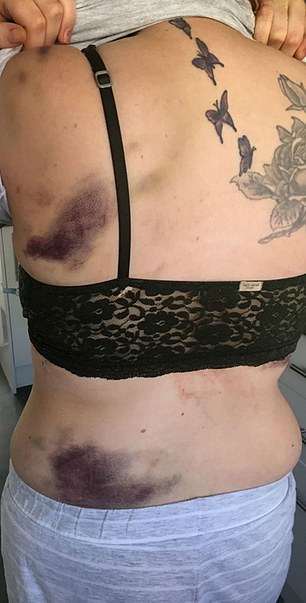 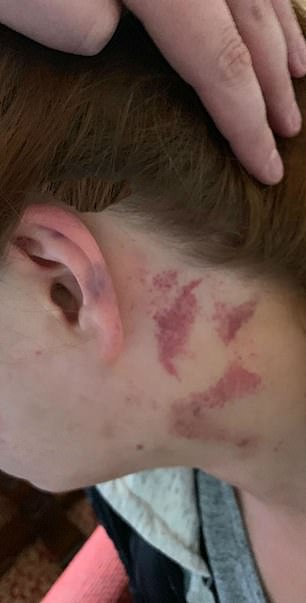 The mother-of-two also received injuries to her back and neck. And other snaps show her bloodshot eyes 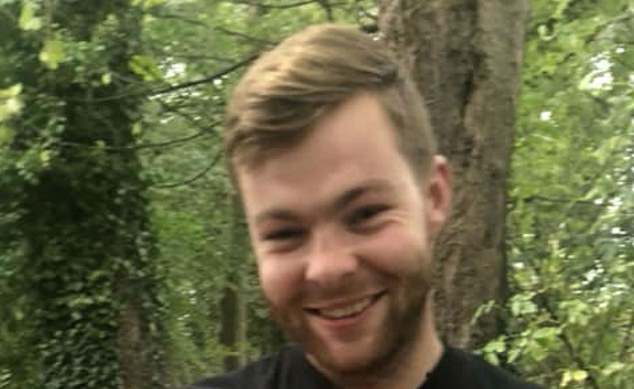 Jenna, from Kirkham, Lancashire, took to Facebook to complain that he had received 21 months in prison and could be out in six.

The Crown Prosecution Service today clarified that the sentence was just 14 months plus a five-year restraining order. The CPS admitted he could be released after seven months.

The attack happened on May 4 and Whiteside was sentenced at Preston Crown Court yesterday.

Her pictures show both eyes blackened and bloodshot, a lump on her forehead, bruising to the back of her neck, and bruises all over her back and arms.

Jenna posted on social media: ‘This is such a hard thing to do. To publicly air my ‘dirty laundry’.

‘But today I sat in a courtroom, waiting to hear how long the father of my 1-year-old child would get for ABH (actual bodily harm).

‘ABH, because no bones were broken (unbelievable) he used the excuse he had too much to drink, even though there were other times and he was sober.’

She added; ‘He was sentenced to 21 months in prison, but due to our legal system and reductions he’s apparently ‘entitled’ to, on good behaviour he will be out in just 6 months and this for me just isn’t good enough.

‘This isn’t a pity post, I already feel stronger than I have ever felt but I will not be silenced by this man another second of my life and I honestly couldn’t forgive myself if he ever did this to someone else (he has history and previously assaulted his ex girlfriend).’

Jenna described her former partner as the ‘most manipulative, controlling, possessive person’.

She added: ‘And in just 6 months time he could be walking the streets looking for his next target.

‘And please, If you are with someone who is controlling you, making you feel scared, trying to stop you having friends or working.

‘I know it’s hard but leave. Take the kids, leave the material stuff. So many times I wanted to go and tell someone what was going on.

‘But I realise now there is so much help out there. Tell someone. Anyone. My two children could have ended up losing their mother.’

Emma Jayne Brookes wrote under Jenna’s emotional post: ‘You are amazing. Certainly not right his sentence that’s disgusting and they wonder why people don’t come forward when they are in abusive relationships.

‘This actually made me cry having been in violent relationships in my past I know how hard it is.But you are strong and beautiful.’

Tish Burley said: ‘Jesus f*****g Christ. I’m actually crying for you. I’m so so sorry you experienced this.

‘I’m sorry the system has let you down, those pictures are really hard to look at and I hope he never does that to another person again. I’m so sorry for what you’ve gone through.’

James Cowell posted: ‘F**** hell. Six months this justice system is an absolute joke they give out a heftier sentence for shoplifting.

‘What an utterly disgusting piece of filth.’

A spokesman for the CPS said: ‘Mark Whiteside was sentenced to 14 months imprisonment and a restraining order for five years at Preston Crown Court for ABH.

‘He could spend a month on remand and that will be taken out of his time in custody. Prisoners serving under three years may be released early on a tag.’