A brave little mouse stood its ground against a family’s giant cat in a real-life Stuart Little face-off caught on camera.

Stephen McDonald, 43, was making a cup of coffee in his home in Birmingham when he heard noises coming from the living room.

The father went to investigate the commotion and to his surprise saw his daughter’s cat Kiara facing off with a tiny mouse. 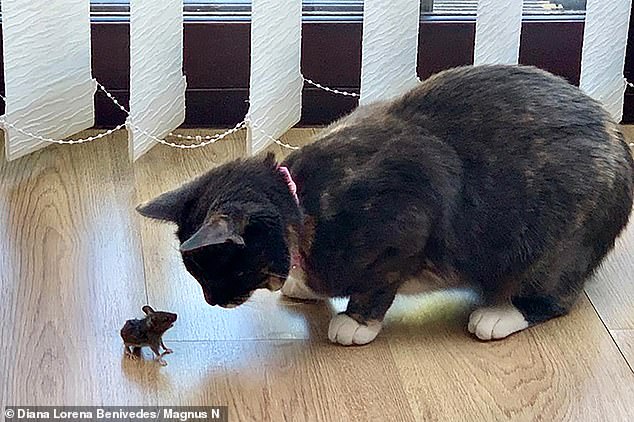 Stephen McDonald, 43, was making a cup of coffee in his home in Birmingham when he saw his daughter’s cat Kiara

Stephen said: ‘It was around 3pm and I was making a sly cup of coffee when I was supposed to be at work.

‘I heard this noise and I entered the living room to what looked like my daughter Diana’s cat Kiara exchanging words with a ball of fluff near the French doors.

‘I realised the fluff was in fact a tiny mouse and thought there’s no consideration for social distancing in the animal world.’

The tiny mouse was within inches of the huge moggy’s face, but stood its ground despite the threat of being eaten.

But what stunned Stephen even more was that the rodent appeared to be the same mouse one-year-old Kiara had brought into the house three weeks ago.

The brave mouse and Kiara seemed to find a mutual respect on the rodent’s return, as the cat did not chase the mouse out of the house. 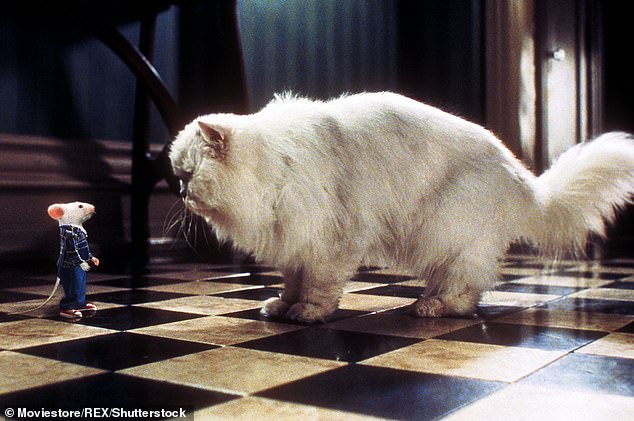 The family have now dubbed the rodent Stuart Little in honour of the talking movie character mouse, who had his own similar face-off with a moggy (pictured)

The family have now dubbed the tiny rodent Stuart Little in honour of the talking mouse from the 1999 film by the same name.

The real-life Stuart did not don the same stylish outfit as the talking movie mouse, but stood up to the huge moggy with the same wit and bravery.

The mouse eventually retreated into the garden, but Stephen thinks Stuart will find his back into their home.

Stephen said: ‘Stuart didn’t appear phased or in distress in any way at all, he stood his ground compared to the giant cat who seemed to offer mutual respect.

‘As I watched, Kiara tapped him in a gentle way with her paw and Stuart walked around her in a circle.

‘Eventually Stuart headed off back into the garden, but we look forward to another visit from him in the not too distant future.’