Movers seen at White House week ahead of Biden arrival 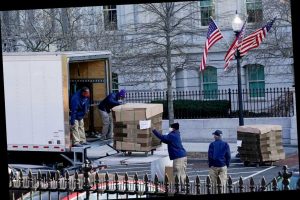 MTA worker who stormed Capitol to be cut loose on bail

WASHINGTON — A moving truck loaded with packing boxes was photographed arriving at the White House on Wednesday afternoon ahead of the House vote to impeach President Trump for a second time.

Four movers were seen unloading pallets of flatpack cardboard boxes outside the the Executive Office Building on the White House grounds as the Trump family prepares to leave the executive residence and decamp to Florida.

Furious preparations are underway with just one week until President-elect Joe Biden takes the oath of office and moves into 1600 Pennsylvania Ave. on Jan. 20.

The commander in chief and first lady Melania Trump officially ditched New York and made the Sunshine State their primary residence in September 2019, trading Manhattan’s Trump Tower for their sun-drenched Mar-a-Lago Club in West Palm Bach.

A source close to the couple told Page Six last month that the pair are looking at luxury homes in Palm Beach and private schools in the area for their son, Barron Trump, 14.

Earlier Wednesday, The Post revealed that Donald Trump Jr. and girlfriend Kimberley Guilfoyle are also house hunting in Florida, following in the footsteps of Ivanka Trump and husband Jared Kushner who just bought a $30 million lot outside Miami.

The Bidens are also gearing up for their move back to the nation’s capitol, with the White House reportedly shelling-out $44,000 deep-clean its carpets before their arrival.

Trump has confirmed he will not attend Biden’s inauguration next week, breaking with decades of tradition as he continues to dispute the outcome of the presidential election.

There have been multiple reports that he will quietly slip out of Washington on Jan. 19, the day before Biden is sworn-in on the steps of the US Capitol.