‘Prisoners of war are treated better’: Music lovers slam ‘Britain’s Fyre Festival’ where the stage flooded, the bar was overrun and staff mocked the suffering of festivalgoers

Organisers of a British music festival have been slammed for their poor management as thousands of guests were allegedly crushed as they tried to escape the torrential rain storm.

A total of 60,000 festival goers were looking forward to Love Saves The Day at Bristol’s Ashton Court on 2 and 3 of June.

But thousands who packed into the event felt their Jubilee Thursday and Friday was completely ruined after severe rainfall left acts forced to quit, people ripping fences out of the ground to hold above them as cover and even using wheelie bins as protection from the freezing weather.

Festival attendees have slammed the organisers on social media for not having appropriate protective weather structures like tents available on the site, with many also having the same experience of staff members ‘laughing’ and ‘taking videos’ of suffering guests getting crushed in the mayhem.

Dave Parry, 36, from Cheltenham, Gloucestershire, went to Love Saves The Day with four friends and said he does not understand why better provisions were not taken, adding that previous years have had tents. 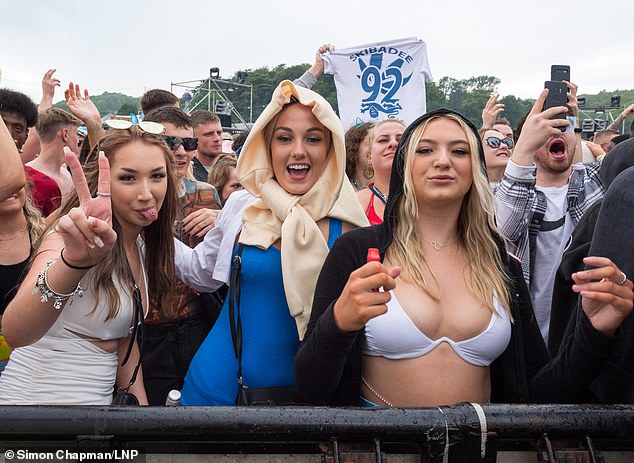 He told the Mirror: ‘There were no ponchos for sale and festival goers were forced to seek shelter anywhere they could including toilets, under bins, under benches, under signage.

‘And the drinks bar became overrun forcing people to get crushed and the bar getting knocked over, all while security and staff took videos and laughed in the warmth. Security staff were abusive and aggressive with festival goers trying to seek shelter. Prisoners of war are treated better.

‘When we tried to leave there was carnage with people getting crushed in the crowds. This festival was on par with Fyre Festival in terms of organisation.’

And Dave is not the only one frustrated at organisers, with thousands of angry guests descending upon the social media accounts of Love Saves The Day to demand refunds and complain of their mistreatment. 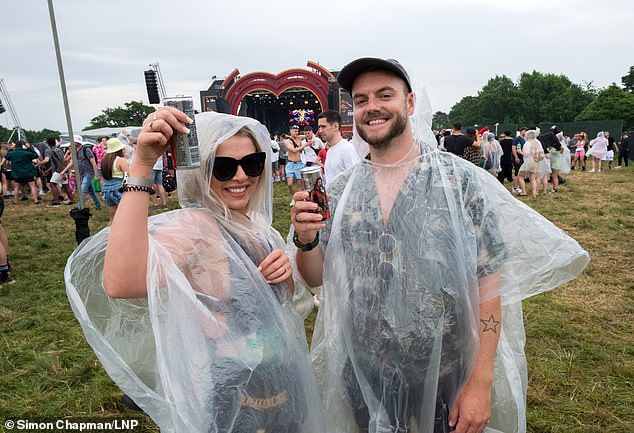 Thousands who packed into the event felt their Jubilee Thursday and Friday was completely ruined after severe rainfall left acts forced to quit, people ripping fences out of the ground and even using wheelie bins as protection from the freezing weather (pictured last week)

Many had similar stories to one another, that people’s lips were turning blue with cold and some still feeling the freeze in the days that followed, with many shivering ‘uncontrollably’.

And it only got worse when people tried to leave, with the exit gates being described as a ‘mass exodus’ as everyone rushed to get home and into warmth.

Even artist Arlo Parks was left disappointed with her trip to Bristol for her gig at the festival, as she was forced to withdraw from performing as the stage flooded so badly.

She apologised to fans on Twitter: ‘I’m so so sorry to everyone who was ready to see me at Love Saves The Day. The stage was flooded and it just wasn’t safe to perform – I hope everyone had a wonderful time and I can’t wait to be stomping through Bristol again when the time is right.’

Mr Parry described how he saw people having panic attacks and getting crushed into the wall.

A spokesperson for the festival organisers said in a statement to the Mirror: ‘Although this was a rapidly changing situation, all the teams on site worked hard to manage the changing flows of people as they headed home or sheltered from the rain. 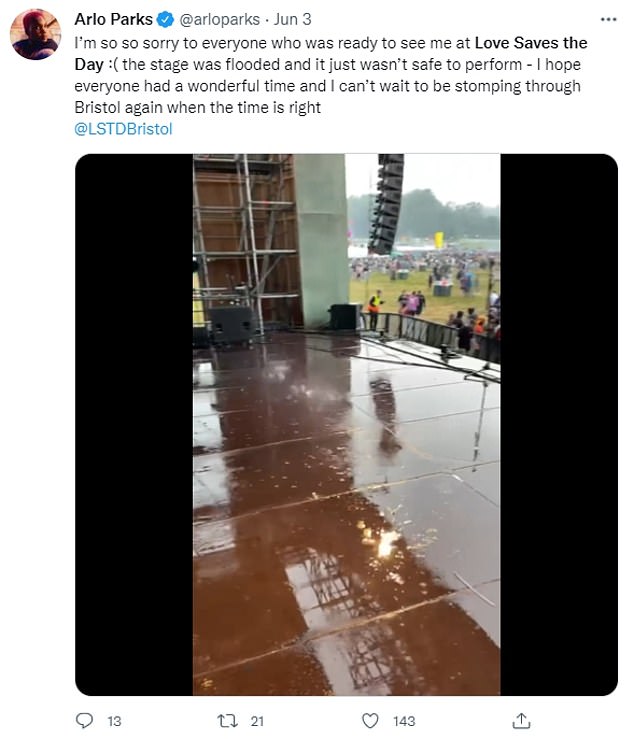 Even artist Arlo Parks was left disappointed with her trip to Bristol for her gig at the festival, as she was forced to withdraw from performing as the stage flooded so badly

‘It was our priority to make sure everyone who left got home safely and we were able to safely continue the show for everyone who stayed including some great headline acts.

‘Whilst there was a sudden increase in the number of people leaving, no injuries were reported to us on-site or in the queues to get onto the buses.

‘Despite the challenging conditions, at no point was our event safety management plan compromised. Our team worked together dynamically to manage the situation and the impact of the weather.’

Despite their torrent of abuse online, the Love Saves The Day Instagram page continued to share snaps of the festival, including one post of Chase and Status performing. They praised guests for ‘braving the rain’, but in the comments of their post, people were accusing the account of deleting comments to ‘hide’ how bad the two-day festival was.

‘We, as a festival, have always avoided structures at Love Saves The Day because our love and focus is on creative outdoor builds, and we pride ourselves in our unique designs which we hope is a large part of why you have all come with us on this 10 year journey.’ 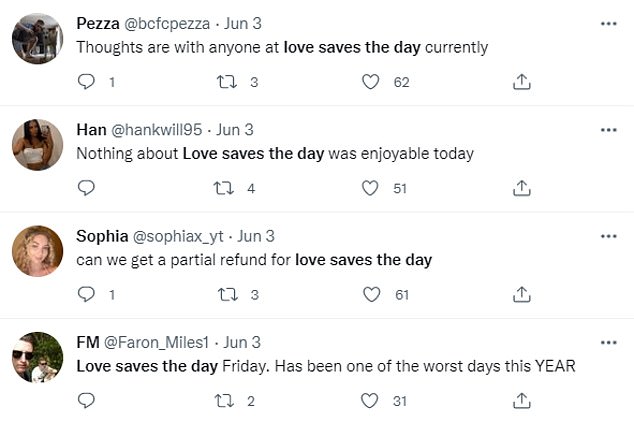 On Twitter, complaints about the festival rolled in, with one user who quipped: ‘The less said about Love Saves The Day yesterday the better’

One user commented on the post: ‘You can’t control the British weather no, but you can control the sh**** attitudes of your staff (whatever they were getting up to) and how you care for people in need…

‘Other than that, yeah bangin. Stop trying to cover up for the absolute shambles that today was.’

Another argued that the decision to not have indoor tent coverage was slammed by one festivalgoer who has been to Love Saves the Day in years before: ‘Previous years at Eastville Park you’ve had tented stages so enough with that. Even if you didn’t want the stages in a tent you could of at least provided cover.

‘The site was big enough, yeah it rains but the limited seating you did provide was useless and had no cover. The only cover was some tiny little shacks and the bars. You’ve tried to make it bigger to get more money.’

Another explained why her first time at Love Saves The Day will also be her last: ‘I have genuinely never felt as unsafe as I did when I was leaving Love Saves yesterday after it started to torrential rain, where were the security to help people get out?

‘Fights were breaking out and people were unconscious but no one was there to make sure people got out safely. Shame on the organisers of this, so disappointed at the poor planning and lack of care for people’s safety, not to mention bad attitude of security guards when they were there.’

One even went as far to say he could have brought in a gun with how poor security was: ‘Not even bothered about the rain. Could have brought an AK47 in without anyone knowing, security was non existent. As well as a two-hour wait to get out of the hell hole. W***fest.’

On Twitter, one user quipped: ‘The less said about Love Saves The Day yesterday the better.’

Another wrote: ‘Love saves the day Friday. Has been one of the worst days this YEAR.’

‘Nothing about Love saves the day was enjoyable today,’ another user said.

In another post following the two-day festival and a lot of backlash on social media, bosses shared a statement of apology to guests. It read: ‘We are really devastated to hear that so many of you didn’t have a good time yesterday and left the festival early.

‘We put our heart and soul into Love Saves the Day all year round to ensure that everyone has a fantastic two days of music and dancing, so to know that many of you weren’t able to enjoy the show is heartbreaking. 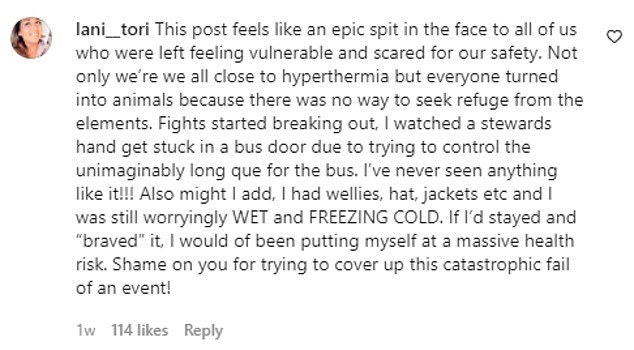 Despite their torrent of abuse online, the Love Saves The Day Instagram page continued to share snaps of the festival, including one post of Chase and Status performing. They praised guests for ‘braving the rain’, but in the comments of their post (pictured), people were accusing the account of deleting comments to ‘hide’ how bad the two-day festival was

‘When the rain came it was unexpected and torrential. There was a forecast of showers but nothing as heavy and as constant at the two hours we all faced. We are disheartened to hear reports of some security or staff who were unhelpful or aggressive; this is totally unacceptable and hopefully it goes without saying that is not what we are about.

‘We are sorry if some of you felt the response from the festival was slow to happen. We can assure you that behind the scenes all of our senior management team were working together to try to control the situation safely and securely.

‘Our main aim was to enable those of you who wanted to leave to do so, and for those who decided to stay, getting the stages back open as soon as it was safe to do so.

‘We recognise that communications around re-entry were unclear for a time – the team was working dynamically in response to the evolving circumstances and we addressed it as soon as we were able to.

‘Love Saves The Day has been an outdoor open air festival since its beginning 10 years ago. We have had some tents over the years, but we have always been predominantly outdoors and uncovered.

‘Fundamentally it would not be possible to provide cover for 30,000 people simultaneously during a biblical downpour without putting all the stages into tents and completely changing the whole identity of the festival – but with that being said, we will look to provide more cover and shelter next year at the event and to ensure that the site wide response system is strengthened.’