‘My sacrifice until she’s an adult’: Parents reduce work to support year 12s

Mary White is well beyond the hands-on years of early motherhood and is fully engaged in helping run her family’s two city cafes. Yet, she feels it is time to scale back on work once again.

As her daughter Scarlett approaches year 12, White is part of an anecdotally growing trend. If they can make it work financially, some parents – mainly mothers – are reducing their work hours or shifting from full-time to part-time to support children until the end of school, especially after pandemic disruption. 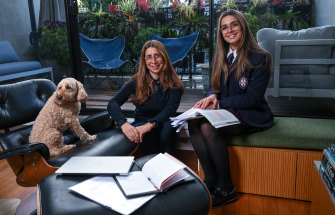 Mary White has changed her work pattern to be home in the afternoons to support daughter Scarlett through her final years of school.Credit:Eddie Jim

Scarlett is in year 10 at St Michael’s Grammar, but already her mother has adjusted her work routine to be home to spend the afternoon with her.

“I just want to offer a bit of stability when their life is so chaotic; a pot of food on the stove so the house smells nice, warm and comforting, a routine and a point of contact. If she wants to share, I’m there, if she doesn’t, that’s OK too,” she said.

“That’s my sacrifice from now until she’s an adult … there’s no place I’d rather be.”

White says her peers, who are in their late 40s and 50s, “are doing pretty much what I’m doing; changing their hours to be home in the afternoons, or going part-time [when children are in/near year 12], when they may have been full-time employed”.

Andrew Fuller, clinical psychologist and author of Help Your Child Succeed at School, said parents adjusting their work schedule to support kids in senior school should not feel they are hovering, as the pandemic had denied young people of many rites of passage to maturity.

“Generally speaking, year 12s are the new year 9s developmentally; all the social stuff they usually have to deal with [on the way to year 12], the class of 2022 hasn’t had. It hasn’t really formed as a group in the way it would have normally,” Fuller said.

Heightened anxiety and being unaccustomed to high levels of stimulation due to lockdowns are causing some students to “pull the escape hatch” when schoolwork gets challenging.

“Being there to be a bit of a traffic cop is actually useful,” and doesn’t amount to helicopter parenting, he said.

Fuller said some parents were even hiring retired teachers as “managers” to oversee their year 12’s workloads, which was proving helpful to students struggling with routine after lockdowns.

Angelina Eynon, a women’s leadership development coach, moved her family from Melbourne to her parents’ hometown of Canberra so daughter Imogen could also be supported by her family as she finishes school.

Eynon also cut back her business travel and turned down some teaching and facilitation work to enable her to be present at home more often, as she was when Imogen started school.

“Neither of us travel back to Melbourne for work as we would have in the past, we make sure someone’s here to pick her up every day if she needs that, and to drive her to activities,” she said.

Parenting author Madonna King, whose book, L Platers: How to Support Your Teen Daughter Into Adulthood, is just out, said she had seen “both in my research and in my own world” parents cutting back work to be at home for year 12 students.

“Sometimes it’s mum. Sometimes it’s dad. But they’ll decide to go part-time, or travel less, or to reduce the workload for that period,” she said.

Her research with 1000 students aged 16 to 18, year 12 teachers, and psychologists has shown that year 12 is tougher than it used to be.

“It is so much more over-powering than it was when we were at school,” said King, who has arranged her work, including trips from her home in NSW for her book tour, around her year 12 daughter’s peak study periods. 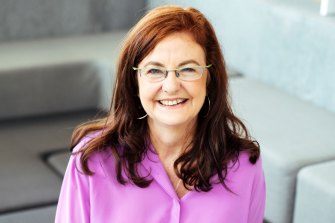 Madonna King has organised her book tour around her year 12 child’s exam and study needs.

“Students are putting their lives on hold pursuing the highest possible ATAR; it’s a life-denier and a heart-breaker.”

As well as losing a sense of belonging and purpose due to the pandemic, King said contemporary teens had missed out on vital risk-taking experiences, meaning “they’re turning [into] adults with vulnerability because they haven’t had to make decisions”.

“[That parents are cutting back at work] may be an indictment on the school system, or maybe it’s a recognition that year 12 is just so difficult that so many parents have to alter their work plans to ensure their children – who should be adept by that stage – have the required support.”

Of parents wanting to be there, she said: “I think it’s perfectly understandable that they would do that.”

Rae Cooper, professor of gender, work and employment relations at the University of Sydney, said it was generally mothers who adjusted their work around their children’s commitments during the early and later years of school.

“One doesn’t stop being a parent when kids go to school, and some children have quite intense needs for support in the high school years.

“It is important that parents feel that they can be involved in children’s lives when they are needed, and I’d encourage employers to support the flexibility that employees need through policy and practice, but it is equally important to ensure that we are not simply book-ending mothers dropping back at work [looking after babies and late teens],” she said. Fathers should also be involved, she added.

“Parents do need to be involved and present, not to create dependent kids or to nag them, but to be supportive and encouraging,” she said.

Fuller agreed, saying parents should act as managers, rather than being “on the tools” and helping to complete schoolwork.

“You know you’re doing too much when the mark received doesn’t reflect your level of effort,” he said.