For years a mystery has engulfed Westminster Abbey’s Unknown Warrior over the fate of the other fallen troops considered for his commemorative burial.

The unidentified soldier had been selected from remains of a number of men killed in battle during World War I and brought to the military chapel at Saint-Pol in France.

While he became one Britain’s most famous military figures the other dead, not picked for the burial, were rumoured to have been dumped in a nearby shell hole.

But now the truth about what happened to the other men may have finally been unearthed in newly-discovered orders.

They suggest an officer Captain Albert Fisher was in fact ordered to arrange a night burial for them in Cagnicourt British Cemetery. 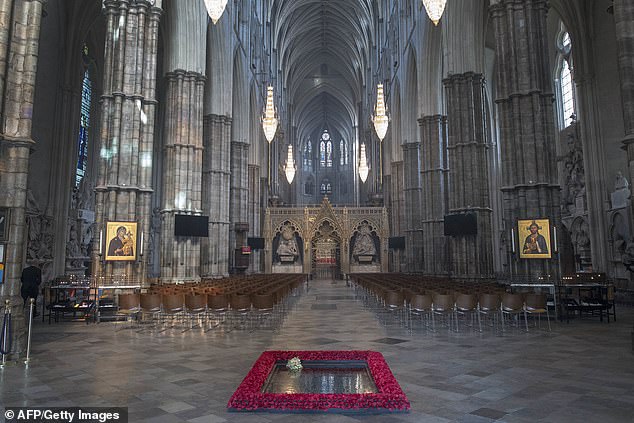 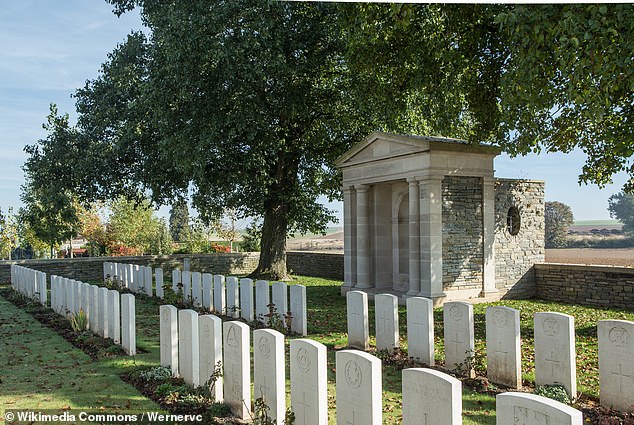 Cagnicourt British Cemetery in France, where the unselected soldiers are believed buried

He resigned from the service a few weeks later, which may have been sparked by the possibility they were buried in unmarked graves.

Brigadier General Louis John Wyatt has been featured in accounts as being the officer involved who made the selection.

Wyatt wrote in a letter in 1939 saying three bodies not selected were buried at the British cemetery of Saint-Pol.

The Times said this latest uncovered ‘secret’ document orders Fisher to arrange for an ambulance to be at Cagnicourt military cemetery then ‘reinter in the cemetery 3 bodies (graves having been dug)’. 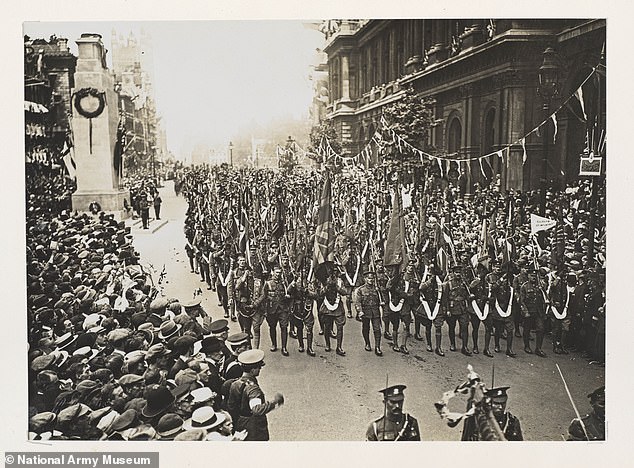 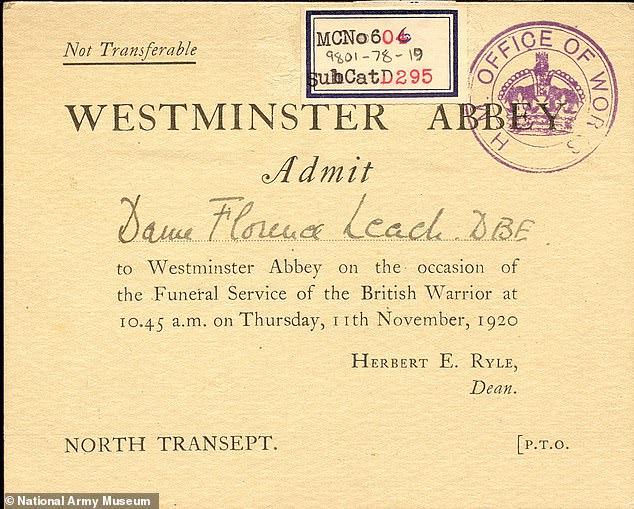 It was found by Jason Davidson and Peter Roch, of Squeaky Pedal productions, working with Mark Scott and Justin Saddington, of the National Army Museum in Captain Fisher’s possessions.

They are going to be displayed in the National Army Museum in London in a new exhibition.

In 2014 another document explaining how the Unknown Soldier’s body was selected was revealed by the grandson of Army chaplain George Kendall.

Tim Kendall said: ‘My grandfather selected six corpses without identification marks. He made sure all the coffins looked exactly the same and that there was no evidence of where the bodies came from.’ 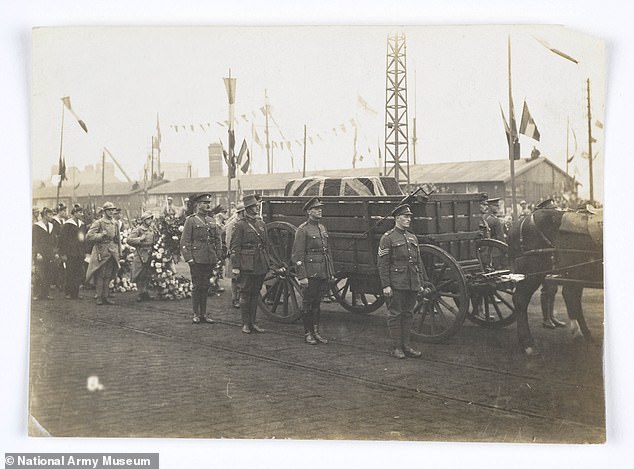 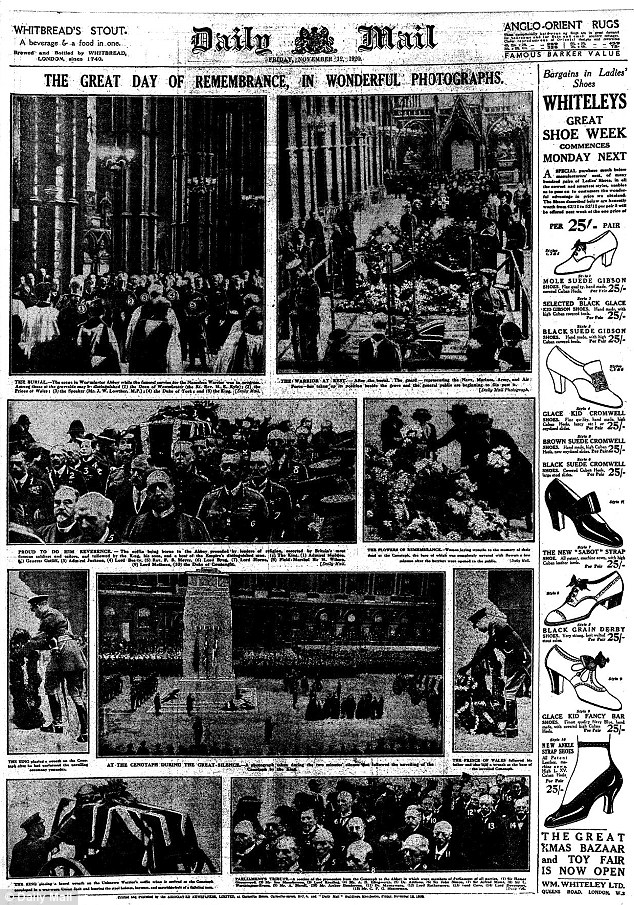 Archive: The back page of the Daily Mail from November 12, 1920, with pictures of the funeral

STORY OF THE UNKNOWN WARRIOR

The Unknown Warrior’s body was brought from France and buried on November 11, 1920.

The idea is believed to have come from Reverend David Railton, who had been a chaplain on the Western Front.

Some 1.2million people visited the Abbey during the week after the burial, and the site is one of the world’s most visited war graves.

In 2011, the Duchess of Cambridge followed the poignant royal tradition of having her wedding bouquet left at the grave.

The late Queen Mother began this when her posy was left at the grave in 1923 after her wedding to the Duke of York, later George VI.

She laid the bouquet in tribute to her older brother Fergus Bowes-Lyon who was killed at the Battle of Loos in 1915 aged 26. His burial place was only found after her death in 2002.

The biblical text on the tomb is taken from 2 Chronicles 24:16, which says: ‘They buried him among the kings, because he had done good toward God and toward his house’.

The 46-year-old charity adviser said that when he found the story in a box left by his grandfather, he realised: ‘This is a very significant part of British history.’

It said ‘Bodies were taken to the headquarters at St Pol, near Arras. Those who awaited the bodies did not know from where they had come.

‘The six coffins were placed in a hut and each was covered with a Union Jack. All night they rested on trestles, with nothing to distinguish one from the other.

‘The door of the hut was locked and sentries posted outside.

‘In the morning a general entered the hut, placed his hand on one of the flag-shrouded coffins and the body therein became the Unknown Warrior.’

Another chaplain, Reverend David Railton, is said to have got the idea for the Unknown Warrior after noticing a grave in France in 1916 with a cross and the words ‘An Unknown British Soldier’.

Four years later in 1920 he wrote to the Dean of Westminster, Herbert Ryle, with his idea, and the body was chosen from servicemen exhumed from four battle areas – Arras, Ypres, the Aisne and the Somme.

It is said that Brigadier General L.J. Wyatt chose the body at random.