A Tory council has been accused of ‘creepy and outrageous’ behaviour by deploying litter snoopers at the height of the pandemic.

Staff from a private contractor have been spotted rifling through recycling bins and photographing waste in a manner some horrified residents have likened to ‘something you’d expect from the Stasi’.

Wandsworth Council in South London admitted recently it needed to ‘reflect on its priorities’ in the wake of the Covid outbreak, which has caused delays to some bin collections due to staff shortages.

Yet refuse ‘enforcers’ are still out on patrol even as residents are locked down in their homes. 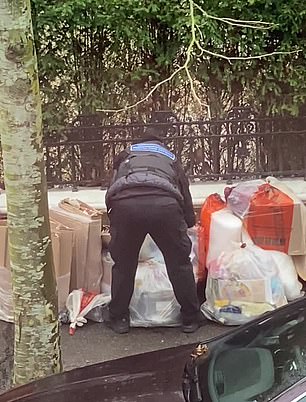 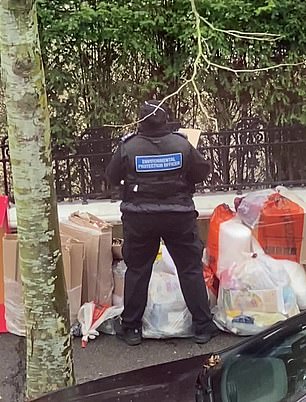 BRAZEN: The female ‘environmental protection officer’ bends down to open one of the recycling bags and begins to rifle through the bag, pulling out objects and examining them closely

One resident told The Mail on Sunday: ‘I couldn’t believe my eyes. There was a woman all dressed in black walking down our road, brazenly rifling through recycling sacks.

‘She was opening up the bags, pulling things out and taking pictures of them on her mobile.

‘Then she took a photograph of the owner’s front door. It’s creepy and outrageous – like something you’d expect from the old East German Stasi. There could be private letters, bills, bank statements – anything in those sacks.

‘And they were doing this to residents who’d taken the time to sort out their recycling and line it up neatly in order to be good citizens.’ 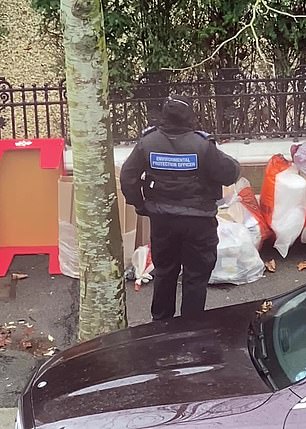 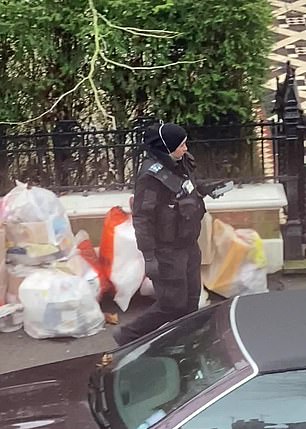 DEEPER: She continues to the bottom of the sack taking photographs of any items that she objects to and then stands back to look at her handiwork

The local added: ‘Wandsworth is supposed to be a Tory council – it beggars belief they are doing this at the height of a global pandemic. Needless to say, you can’t get hold of anyone at the council because so many are working from home.’

Two days after this video footage was shot, Wandsworth Council tweeted it could not complete bin collections that day because of ‘unforeseen staffing shortages’.

It prompted one resident to add: ‘So they can snoop through people’s bins but can’t take the rubbish away?’

Locals in Wandsworth – which has been staunchly Tory for more than 40 years – are instructed not to put their waste out before 6.30 the evening before collection so pavements are clear.

The bags videoed had been put out several hours before that time. During the first lockdown, fly tipping more than doubled across the capital as a result of disruption to normal collections and the closure of recycling centres. 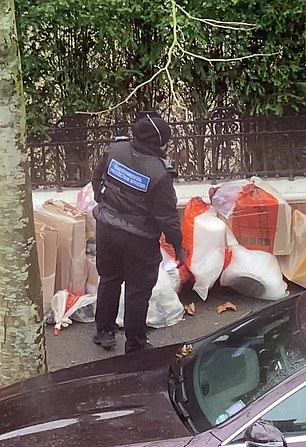 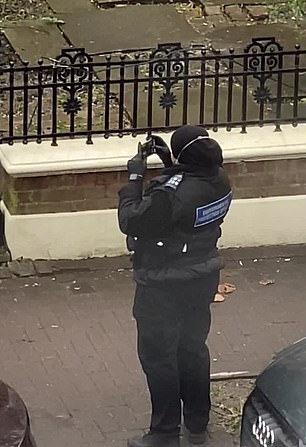 JOB DONE: The woman, dressed head-to-toe in black, then appears to walk away, her mobile phone clutched in her left hand… only to pause to take a photograph of the front door where the recycling bags had come from

In response, Wandsworth launched a crackdown which means if commercial fly tipping is suspected, an inspector can search the waste to find out who dropped it.

Wandsworth Council said: ‘We make no apology for taking action against flytippers who dump rubbish on the street, creating eyesores, blocking pavements and encouraging pests.’

NSL said: ‘The enforcement action taken was part of the day- to-day activities which are focused on keeping Wandsworth’s streets clean.’ 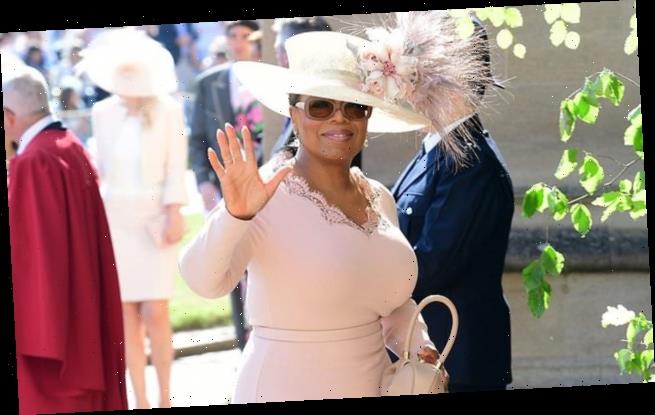