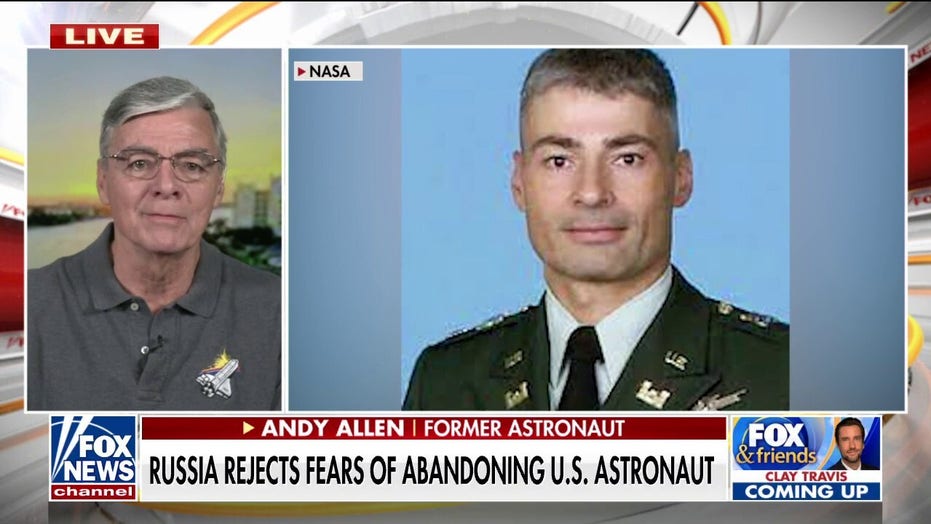 While Russian forces invade Ukraine and the West responds with unprecedented sanctions, an American astronaut is preparing to hitch a ride with two cosmonauts on a Russian spacecraft back to Earth from the International Space Station later this month.

Mark Vande Hei, a retired Army colonel, is set to break the record on Tuesday for the longest continuous stay in space by a U.S. astronaut before he departs the ISS on March 30.

There were some fears after Russia invaded Ukraine that the cosmonauts would ditch Vande Hei when they return to Earth in a couple of weeks.

Dmitry Rogozin, the head of Russia’s space agency Roscosmos and a longtime ally of Putin, posted a video of the US flag being removed from a Soyuz rocket and has publicly sparred with retired U.S. astronaut Scott Kelly.

In a tweet that has since been deleted, Rogozin allegedly told Kelly that the “death of the [ISS] will be on your conscience.”

Russian-state media outlet RIA Novosti also shared edited footage from the ISS that appears to show the cosmonauts waving goodbye to Vande Hei and departing without him before the Russian segment detaches from the rest of the space station.

“It kind of enraged me that the country that we had been in this international partnership for 20 years would take the time to make a video to threaten to leave behind one of the crew members they are responsible for,” Kelly told the Wall Street Journal this week.

“They agreed to be responsible for his safety, getting him to the space station and getting him home. For me, that kind of just crossed the line.”

Despite the concerns, NASA said that they are continuing to work with their Russian counterparts and Vande Hei will be on the Soyuz rocket later this month.

“We have on March 30th the return of a Soyuz, a return of Anton, Pyotr, and Mark. And I can tell you for sure Mark is coming home on their Soyuz. We are in communication with our Russian colleagues. There’s no fuzz on that,” Joel Mantalbano, the program manager for the ISS, said at a NASA press conference on Monday.

“Our Roscosmos colleagues have confirmed that they’re ready to bring the whole crew home. All three of them.”

Roscosmos also said through Russian-state media that the March 30 return would continue as planned.

“Roscosmos has never let anybody doubt its reliability as a partner,” the space agency told TASS.

The two Russians, Pyotr Dubrov and Anton Shkaplerov, will land with Vande Hei in Khazakstan later this month.

Vande Hei and Dubrov originally launched to the ISS last April and are staying twice as long as usual to accommodate a Russian film crew. By the time Vande Hei returns, he will have logged 355 days in space, a new U.S. record.

The Biden administration targeted Russia’s air and space industry in the first round of sanctions after Putin invaded Ukraine last month.

“We estimate that we will cut off more than half of Russia’s high-tech imports, and it will strike a blow to their ability to continue to modernize their military. It will degrade their aerospace industry, including their space program,” Biden said on Feb. 24.

NASA and space agencies in Europe, Japan, and Canada want to keep the ISS running until 2030, but the Russians have not committed beyond 2024.