Only a quarter of nearly 38,000 fines handed to Victorians for breaches of coronavirus restrictions have been paid, with only a fraction of them withdrawn.

Victoria Police said on Thursday that 37,939 fines had been issued since the beginning of the pandemic early last year, and only 25 per cent had been paid. 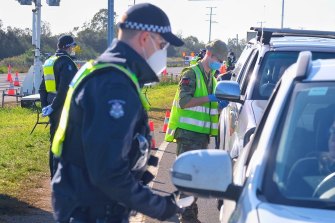 Police and ADF personnel at a checkpoint on Melbourne’s outskirts in July last year.Credit:Luis Ascui

About 2000 people have chosen to challenge their fine in court, while another 2000 fines have been withdrawn after review. The bulk of the unpaid fines – about 25,000 – are with Fines Victoria for enforcement.

The surge in the number of public health order breaches related to the pandemic was revealed in the quarterlycrime statistics released on Thursday. The figures cover the year to March 31.

While the overall crime rate dropped, Victoria recorded the highest ever number of family violence incidents during this period.

The number of non-family-related offences dropped by 13 per cent to 382,445. In real terms, that translated to almost 59,000 fewer offences, largely driven by a big drop in retail theft, burglaries and stolen cars.

“This increase in family violence-related victimisation has been seen for the last three years, reflecting more than pandemic-related impacts,” she said.

When COVID-19 fines were taken out of the data, family-related incidents made up 22.7 per cent of all offences in the past 12 months, compared with 16.7 per cent five years ago. 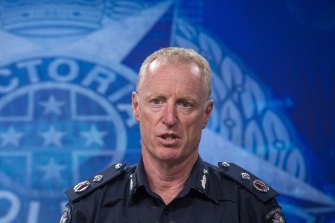 There were 37,394 COVID-19 restrictions breaches over the past 12 months, which made up about 7 per cent of all offences recorded.

Deputy Commissioner Rick Nugent said the rise in family violence was extremely concerning, and pressures relating to lockdowns as well as an increase in reporting of incidents both contributed to the trend.

“It’s a combination. I still know and understand that family violence can still be under-reported in many areas and in many communities. So we continue to build trust with communities and families to enable reporting. Part of it will be that increased confidence and trust to report family violence,” he said.

A Victorian government spokeswoman said dedicated operations to check on at-risk families during lockdowns drove an increase in reported incidents and offences, including breaches in family violence orders, and said investments were being made to improve the response.

“But it’s extremely concerning that it is as big a step as it is. That 21 per cent of all crime in the state is actually family violence related … That’s one-fifth of our crime … so it is a significant priority for us.”

Mr Nugent also acknowledged there was a “significant amount” of people who had not paid their coronavirus fines. In 2019, 31 per cent of all fines were paid within 30 days and 47 per cent were paid in 180 days.

Close to 50 Victorians were fined during the state’s latest circuit-breaker lockdown for blatant or deliberate breaches of the rules, although Mr Nugent noted police had seen more compliance with restrictions in recent times.

“We are seeing what I think is probably far greater community compliance,” he said.

In a statement, a government spokeswoman said fines do not expire and they will continue to be collected and enforced.

“We encourage anyone with an outstanding fine to contact Fines Victoria as there are many flexible options available to help resolve their fine,” she said.

Victoria Police was forced to reiterate its commitment to pursuing COVID-19 fines after it claimed in January that a guidance note from the force’s legal services department, which advised police to hand out cautions for unpaid infringements rather than proceed with charges, was “poorly worded” and did not reflect its true position.

The Age revealed this week that the Andrews government is secretly negotiating with three crossbenchers to introduce specific pandemic laws that would permanently replace controversial state of emergency powers. One of the crossbenchers’ demands is that disadvantaged Victorians would be exempted or pay reduced fines if found contravening restrictions.

Despite a drop in many types of crime during the period, Mr Nugent acknowledged there would be a rise as Victoria came out of the pandemic.

“We’re passionate at the moment about keeping them as low as we possibly can as we ease out so we can work much closer with the community looking at target hardening of areas and how we can prevent a return to pre-COVID levels of crime, but we also know that will be a challenge.”