Home » Neo-Nazi, 52, who lived in bedroom with far-right items jailed

Neo-Nazi, 52, who lived in bedroom with far-right items jailed

Neo-Nazi, 52, who lived with his mother while filling his bedroom with far-right items including SS memorabilia, terror manuals and a certificate from the Ku Klux Klan is jailed for four years 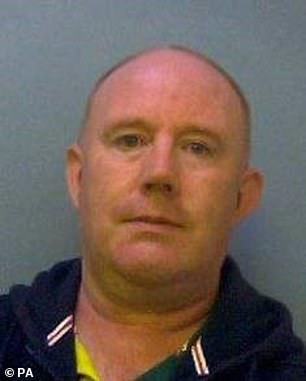 Nicholas Brock, 53, decorated his bedroom with SS memorabilia and had far-right tattoos

A Neo-Nazi who denied being a far-right extremist has been jailed for four years after police found his SS memorabilia-filled bedroom, a Ku Klux Klan recognition certificate as well of a picture of him armed in a balaclava in front of a swastika flag.

Nicholas Brock, 52, still lived with his mother in Maidenhead, Berkshire, and had a tattoo of the Totenkopf skull and cross bones logo used by the Nazi SS and neo-Nazi terrorist group Combat 18.

He also had a folder named ‘Army Military Manuals’ on his laptop computer when police raided the three-bedroomed mid-terraced house on September 13, 2019, which included a guide how to make explosive.

On his computer was downloaded videos of ISIS beheadings and unedited video footage filmed by far-right terrorist Brenton Tarrant shooting 51 people in two mosques in Christchurch, New Zealand in March 2019.

Incredibly he had pleaded not guilty to three counts of possession of material likely to be useful to a person committing or preparing a terrorist act after a trial at Kingston Crown Court but was convicted.

And today Judge Peter Lodder QC left little doubt of what he thought of the ludicrous failed defence he had offered that he was simply an Action Man fan who collected military pieces.

The judge told him: ‘It is clear that you are a right-wing extremist, your enthusiasm for this repulsive and toxic ideology is demonstrated by the graphic and racist iconography which you have studied and appeared to share with others.

‘Your bedroom was decorated with SS memorabilia, a framed Ku Klux Klan recognition certificate in your own name was hanging on your wall. 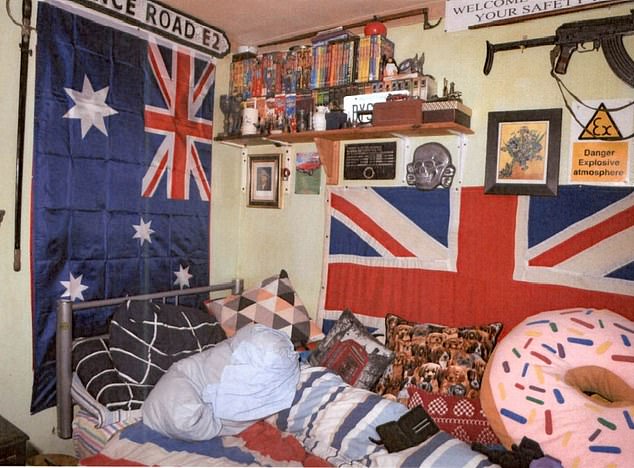 ‘You stored documents such as the offensively titled “N***er owner’s manual”, you had video clips of Ku Klux Klan discussions about race war, of cross-burning, of decapitation, and a propaganda video of Combat 18, a race-hate neo-Nazi group.

‘The police discovered racist ‘memes’, a copy of the Christchurch mosque murderer’s livestream video and a news clip of the proscribed terrorist group National Action.

‘In addition, your stored photographs of you wearing a balaclava and holding firearms in poses reminiscent of the Combat 18 propaganda, and of you in company with other neo-Nazi sympathisers who were making a Nazi salute.

‘The degree of your devotion is indicated by your decision to cover your upper body and arms with tattoos of symbols associated with neo-Nazism, SS death head skulls, swastikas and of individuals infamous in Hitler’s Germany.

‘It is submitted on your behalf that these are not obscure documents, are not specialist material and that two of them can be purchased on-line.

‘That there was no preparation for any act, and that you are in your 50s, walk with a stick there was no evidence of disseminating to others.

‘I do not sentence you for your political views, but the extremity of those views informs the assessment of dangerousness.

‘You were convicted in March 2017 for two offences of racially aggravated harassment you were sentenced to a community order and a restraining order. 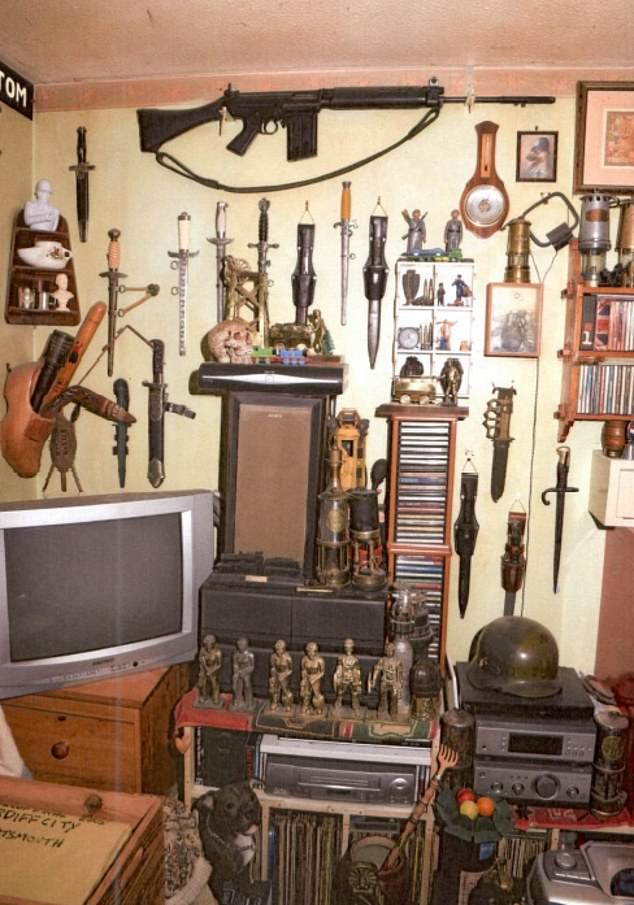 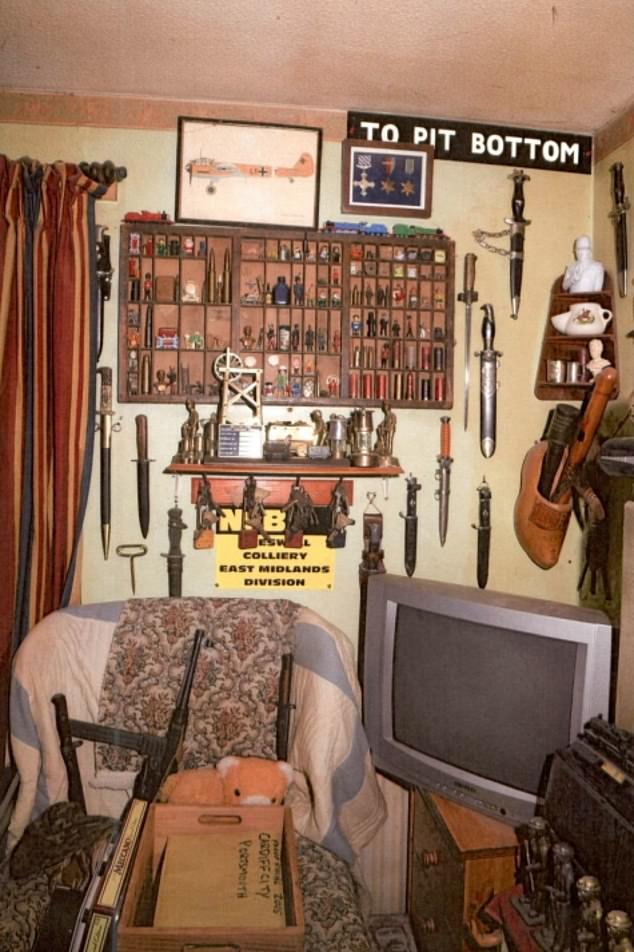 Lawyers say Nicholas Brock’s bedroom in Berkshire was ‘filled to the brim with an eclectic mix of items, amongst them, items demonstrating an interest in extreme right wing and white supremacist ideology.’

Among the items was a Nazi button he kept beside his bed, while a flag bearing an eagle and swastika was displayed on his wall.

There were books about the American white supremacist group the Ku Klux Klan (KKK), a copy of Hitler’s Mein Kampf, and another about Combat 18, while under the bed was a ‘certificate of recognition’ from the Klan.

Among the material on his electronic devices was a photograph of Brock posing in his bedroom, wearing a balaclava, and holding a large firearm, in front of the swastika flag, the prosecutor said.

Another photograph showed Brock in front of the confederate flag, wearing a cap with the words ‘Make America Great Again’, the slogan of the campaign for Donald Trump.

A short video apparently shot in Brock’s bedroom showed a Nazi flag being waved and a KKK figurine.

His hard drive included a folder labelled ‘Army-Military-Manuals’ what contained two manuals for an AK47 assault rifle, and others for US Army pistol training, and explosives, along with a copy of a document known as the ‘al-Qaeda manual’.

The documents were said to include three useful for terrorists: ‘The Anarchists’ Cookbook v.2000′ – which showed how to make grenades and plastic explosives – ‘Knife fighting techniques from Folsom Prison – put ’em down, take ’em out’ and ‘Kill or get killed.’

‘Balancing all of these factors the sentence is one of a custodial term of four years with a licence extension of one year.’

Documents in his possession included ‘The Anarchists’ Cookbook v.2000’ showing how to make grenades and plastic explosives, ‘Kill or Get Killed’, along with ‘Knife fighting techniques from Folsom Prison’.

Brock’s shelves were crammed with right wing literature including a book about the American white supremacist group the Ku Klux Klan (KKK), and a copy of Hitler’s Mein Kampf, and another on Combat 18.

Brock also had a collection of anti-Muslim and racist memes saved in a folder on an external hard drive and owned manuals for an AK47 assault rifle, US Army pistol training textbooks, and Al-Qaeda training materials.

He claimed he was a military memorabilia collector who loved Action Man figures during childhood, had ‘no interest’ in far-right groups and ‘didn’t go out much’.

Emma Gargitter, prosecuting, had said his bedroom was ‘filled to the brim with an eclectic mix of items, amongst them, items demonstrating an interest in extreme right wing and white supremacist ideology’.

Ms Gargitter said: ‘He tried to shift the responsibility to two other individuals, one of was Samuel Palmer, who was vulnerable.

‘Hospital records showed he had visited Palmer at a medical facility in 2017.’

Edward Butler, for Brock, said: ‘These documents were three of a vast quantity of data, much of it macabre or concerning in nature.

‘There was no preparation for such an act, even by taking steps like acquiring household items that might be used in the ways set out in these books.’

Police also recovered a photograph of Brock posing in his bedroom, wearing a balaclava and holding a large gun in front of a swastika flag, the court heard.

Brock also posed for a snap in front of the confederate flag, wearing a MAGA cap with the words ‘Make America Great Again’.

He had used his computer to search for the National Front, the banned right wing organisation National Action, and the KKK and ‘racist photos’. 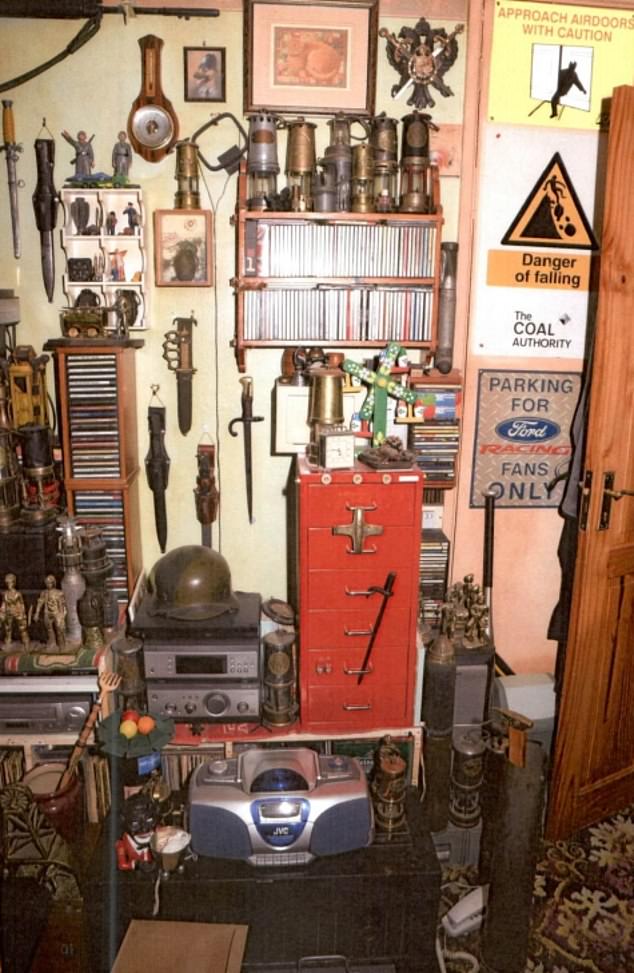 Police also recovered a photograph of Brock posing in his bedroom, wearing a balaclava and holding a large gun in front of a swastika flag

Detective Chief Superintendent Kath Barnes, Head of Counter Terrorism Policing South East (CTPSE), said: ‘From the overwhelming evidence shown to the jury, it is clear Brock had material which demonstrates he went far beyond the legitimate actions of a military collector.

‘He had gathered material useful to terrorism in the context of right-wing terrorism.

‘Brock showed a clear right-wing ideology with the evidence seized from his possessions during the investigation.

‘In this case, Brock has been found in possession of very dangerous and concerning material and will face the full consequences of this by the courts.

‘We are committed to tackling all forms of toxic ideology which has the potential to threaten public safety and security.

‘With the increase in time spent online due to the global pandemic, and a rise in hateful extremism, an environment has been created in which there is more risk of young and vulnerable people being targeted by terrorist groomers.

‘Online grooming can happen to anyone. Young and vulnerable people can be drawn into a way of thinking by what they view and who they speak to online, and it can be difficult for parents, friends or family to know what signs to spot or what to do.

‘It is important that everyone is aware there is help and support available if the behaviour of someone you are close to has changed and you are worried they have become radicalised in their views.

‘If you have concerns about someone you live with or are speaking to, the ACT Early website has useful tips, advice and guidance of who you can talk to, including those organisations which are not connected with the police.

‘However, if you are worried someone is in immediate danger, you should always call 999.’

Brock, of Lancaster Road, Maidenhead, denied but was convicted of three counts of possession of materials likely to be useful for committing or preparing an act of terrorism.

He was jailed for four years and will be subject to notification requirements for 10 years upon release.