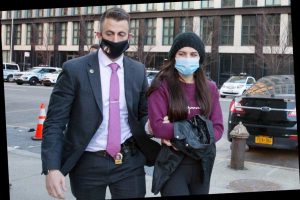 She’ll be back: ‘Soho Karen’ returning to NYC to face charges for alleged attack on black teen

The California woman known as “Soho Karen” for her alleged attack on a black 14-year-old boy has another Big Apple headache.

Miya Ponsetto, 22, who was hauled back from the Golden State to face attempted robbery and assault charges on Saturday, is being probed for allegedly smashing a door at an Airbnb apartment with a fire extinguisher on the same day, sources confirmed Sunday.

The new incident allegedly took place on Dec. 26 at an East Village apartment building where Ponsetto is accused of trying to bash her way into the apartment after locking herself out, according to new details of the incident.

Ponsetto’s attorney, Paul D’Emilia, said Sunday that the allegations surfaced during his client’s arraignment on the earlier case, but said he had no other details on the Airbnb incident — nor have any charges been filed.

D’Emilia said Ponsetto had returned to California pending a return court appearance on the assault case in New York on March 29.

Ponsetto’s caught-on-video rant at the Arlo Hotel in Soho went viral after she accused the teenager of stealing her mobile phone — even attempting to tackle the 14-year-old..

The victim is the son of jazz trumpet player Keyon Harrold.