The New York Times faced backlash over a tweet where they described airplanes taking aim at the Twin Towers on 9/11 and not terrorists.

It was posted on the 18th anniversary of the September 11 attacks, which killed nearly 3,000 people, injured thousands and later led to the deaths of many more due to related illnesses.

The tweet partially read ‘airplanes took aim and brought down the World Trade Center,’ according to a screenshot from political activist Dinesh D’Souza.

It was not clear how long the post remained online but it was deleted and reedited, with a new version was put online.

The article reported on families of the deceased planning to gather at the memorial pools to remember those who tragically lost their lives. 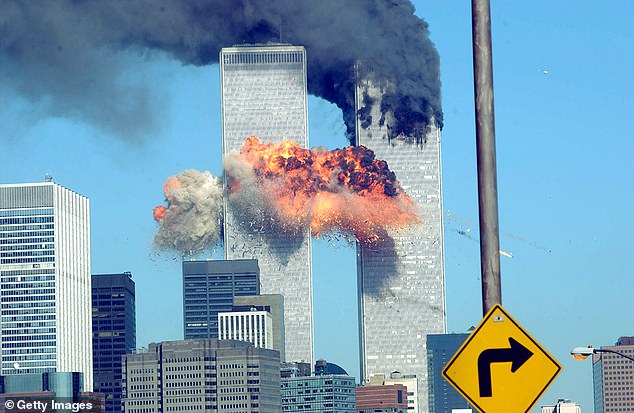 Today marks the 18 years on from the September 11 terrorist attack that killed 3,000 and has been responsible for the deaths of many more from related illnesses including cancer 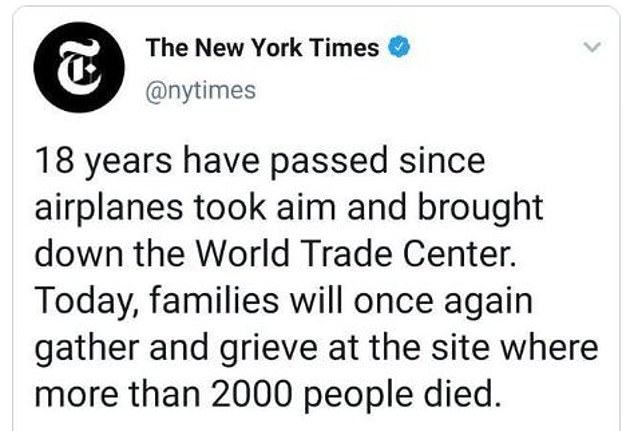 The New York Times tweeted about one of their articles where they said the ‘airplanes took aim and brought down’ the Twin Towers, ignoring the terrorist hijackers

The New York Times wrote: ‘We’ve deleted an earlier tweet to this story and have edited for clarity. The story has also been updated.’

The new post now reads: ’18 years after nearly 3,000 people were lost, families of those killed in the terror attacks will gather at the 9/11 memorial. There will be a moment of silence at 8:46 a.m., then the names of the dead — one by one — will be recited.’

Online social media users critiqued the publication, some describing the incident as ’embarrassing’ and ‘beyond parody at this point.’

Particularly they appeared to take offense over the suggested inference that the terrorist hijackers were not to blame for the attacks, some arguing that it was deliberate.

‘That headline was not a mistake,’ Doug Olenick replied.

‘This is NOT Breaking News, rather a piece of a major part of American History and thousands of people are suffering bc of it and now you added to the pain by making this mistake #NotAcceptable.’

He added: ‘What lengths they will go to to divert attention from who actually did this!’

DailyMail.com contacted New York Times for further comment but were referred back to their originally tweeted statement. 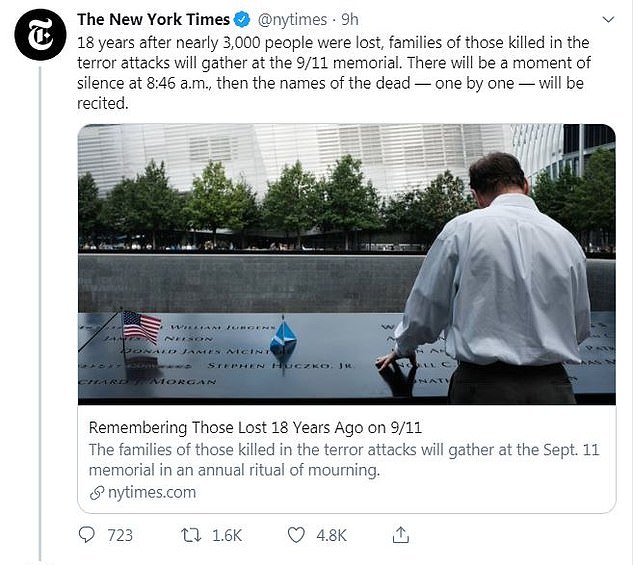