NHS waiting list hits ANOTHER record-high: Now 5.45million patients are in need of routine treatment – as doctors warn health service is ‘running on empty’ and backlog will only get worse

A record high of 5.45million patients in England are waiting for care and doctors warn it could double in a year.

Data released by NHS England today revealed the list grew by 2.8 per cent in June to reach the highest-ever figure since records began in 2007.

And patients seeking routine care are growing, with the figure nearly on par with pre-pandemic levels.

Doctors warn the NHS is ‘running on empty’ after 20 months of ‘unrelenting pressure’ and are now facing ‘unprecedented’ demand for this time of year.

And they expect the waiting list to double within 12 months if action is not taken.

But there are some promising signs that the backlog is being tackled, with the number of patients waiting more than four months and more than a year dropping.

And growing numbers are being seen within the 18-week limit that the NHS says all patients should be seen in.

Health chiefs said healthcare staff have manged to keep working on the backlog, despite some areas seeing their busiest-ever month. 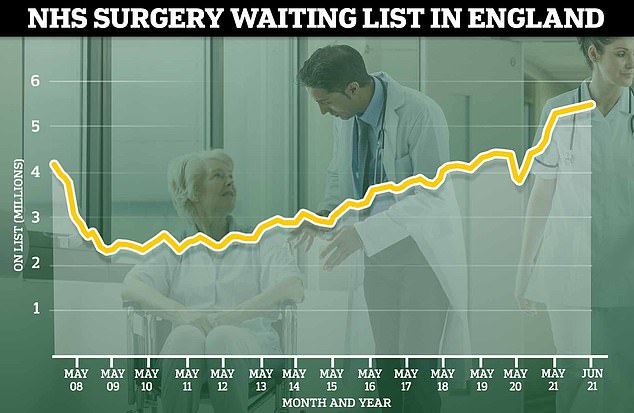 Nearly 1.2million NHS patients have faced waits of at least six months for treatment due to the Covid backlog, analysis has revealed.

The figure, reflecting the English health service’s position in May, is five times higher than pre-pandemic levels.

It highlights just how badly the virus has hit hospitals, which cancelled thousands of operations during the darkest days of the crisis to make room for the infected.

Joint replacements, eye treatment and brain surgery are among the procedures that have been hit by delays.

Under the NHS’s own rulebook, all patients are supposed to start treatment within 18 weeks of being referred.

And more than 130,000 were waiting for eye treatment, ear, nose and throat services and general surgery.

Nearly 90,000 people were waiting for gynaecological services — nearly double the figure for the same month last year and five times higher than May 2019.

The Nuffield Trust warned the backlog will take ‘years’ to clear.

The health service was forced to shut down vital services, including cancer care, during both previous waves of the pandemic to cope with the influx of Covid patients.

However, the figure for June is still lower than the same month in 2019, before the services were affected by the pandemic, when it stood at 289,203.

Meanwhile, the number of people waiting more than a year for treatment dropped to 304,803 – a decline of 9.5 per cent compared to one month earlier.

But the number is still significantly higher than pre-pandemic levels, when between 1,000 and 3,000 patients would be waiting longer than 12 months to be seen.

Dr Nick Scriven, former president of the Society for Acute Medicine, warned the health service is ‘pretty much running on empty after 20 months of unrelenting pressure culminating now in what is really unprecedented demand at this time of year’.

He said: ‘Staff are stressed and exhausted seeing very little light at the end of any proverbial tunnel as we approach a winter that is already being predicted to be severely challenging.

‘Wards are full of very sick people with or without Covid infection and the severity of their illnesses and the subsequent dependency of their needs has made it very hard to discharge them safely if they require any additional social care.

‘We have seen data this week that shows the number of hospital bed days occupied by people who are medically ready to be discharged has been rising and is now higher than in the winter.

‘We desperately need a system fix that allows patients to move more efficiently from emergency departments through acute medical units and onto base wards and discharge as that is currently a major problem.

‘We have spent years – or decades – and millions of pounds trying to ‘fix the front door’ of hospitals yet it will not improve however much resource you throw at it until the backdoor is sorted – and that means tackling social care provision.’

Professor Stephen Powis, national medical director for NHS England, said: ‘NHS staff have made effective use of the additional resources made available to us to recover services which were inevitably disrupted during the pandemic, and we are continuing to tackle the Covid backlog.

‘This has come as services have seen some of the highest ever number of patients coming forward for care during the summer months, all at the same time as delivering the biggest and most precise vaccine roll-out in our history.

‘I would urge anyone who needs NHS to come forward through NHS 111 Online so that staff can help you with the best option for your care.’