The NHS has already given 11 per cent of over-80s in England their first dose of a coronavirus vaccine and has given out jabs to a total 521,594 people, data show.

Health service bosses today revealed 366,715 people aged 80 or older – the group most at risk of dying from Covid-19 – were vaccinated between December 8 and 20.

The Office for National Statistics estimates there are 3.4million people in that age group in England, showing that one in 10 have already got their first jab.

Britain was the first country to start vaccinating members of the public against Covid-19 when it approved the jab made by Pfizer and BioNTech and began the roll-out on December 8.

Between the start and Sunday, December 20, there were 60 hospitals and 423 local vaccination sites giving out the jabs to thousands of people every day.

Data from the clinical trial of Pfizer’s vaccine suggests people start to develop some immunity around 10 to 14 days after their first dose of the jab, meaning death rates among the elderly could start to decline within the coming weeks.

And Health Secretary Matt Hancock announced yesterday that vaccines in care homes have now begun in England, meaning those most at risk will get jabs after that roll-out was delayed because the vaccine couldn’t be easily transported. 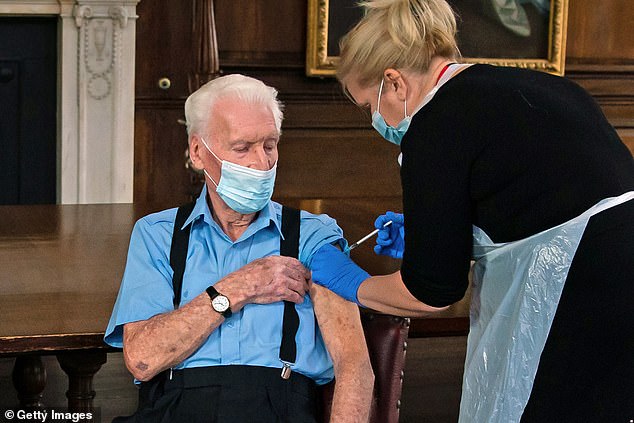 Bob Sullivan, 98, is a resident at the Royal Hospital Chelsea in London, home of the Chelsea Pensioners military veterans, and yesterday became one of the first care home residents in the country to get a coronavirus vaccine 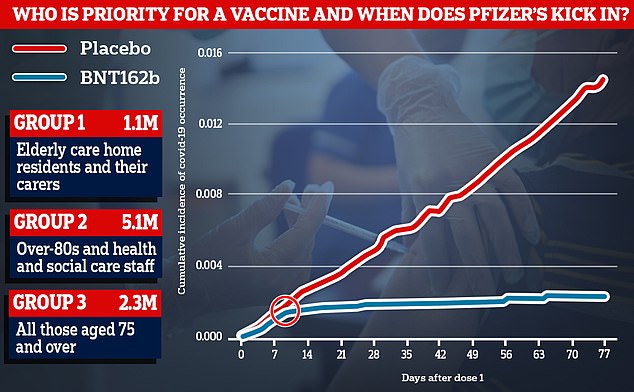 A second coronavirus vaccine is expected to come into use before the new year, with UK regulators the MHRA set to decide on the Oxford and AstraZeneca jab early next week.

There are already more than four million doses of this vaccine on standby in Britain so, if it gets the green light, the roll-out should be significantly sped up.

This is becoming increasingly urgent with the emergence of new, more infectious strains of the virus being discovered in the UK.

SAGE advisers warned in a paper published yesterday that a ‘greatly accelerated’ vaccine programme could be the only way to stop the fast-spreading B.1.1.7 variant of coronavirus, discovered in Kent, from doubling the Covid death toll next year.