No Deal Brexit could lead to months chaos and public disorder

A No Deal Brexit next month could lead to public disorder, travel chaos and shortages of fresh food, medicines and petrol, according to a leaked government document.

The bombshell report, produced by the Cabinet Office, warns that few individuals and businesses have prepared for the impact of No Deal because they have believed government assurances that Boris Johnson is seeking a deal with Brussels.

The 150-page-assessment sets out details of the Government’s contingency plans for No Deal, codenamed Operation Yellowhammer. 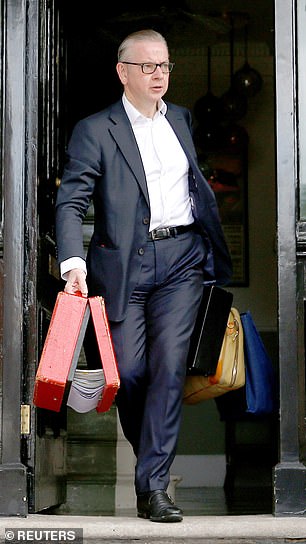 Chancellor of the Duchy of Lancaster Michael Gove. Mr Gove’s papers fell out of his red box last month

It includes a five-page annexe setting out the Government’s ‘reasonable worst case planning assumptions’, which has been leaked to the Daily Mail.

A draft version of the document, which leaked last month, was dismissed by ministers at the time as ‘old’, with Boris Johnson saying it dated ‘from when ministers were blocking what needed to be done to get ready to leave and the funds were not available’. But the latest version seen by the Mail was due to be published by Michael Gove today – until it was pulled last night.

In a sobering assessment, officials warn that a No Deal Brexit could cause major disruption for months, despite the billions poured into contingency plans. They warn that public protests and counter-protests ‘may absorb significant amounts of police resources’.

The document warns that Northern Ireland will be hit particularly hard, with paramilitaries potentially benefiting from an increase in smuggling.

The dossier also appears to undermine Mr Gove’s claim at the weekend that there would be ‘no shortages of fresh food’. It says that the availability of certain types of fresh food ‘will decrease in a reasonable worst case scenario’.

The document says No Deal ‘will not cause an overall shortage of food in the UK, but will reduce availability and choice and will increase price’.

It warns that the situation will be made worse by the timing of Brexit, which comes at the end of the UK growing season and in the run-up to Christmas. 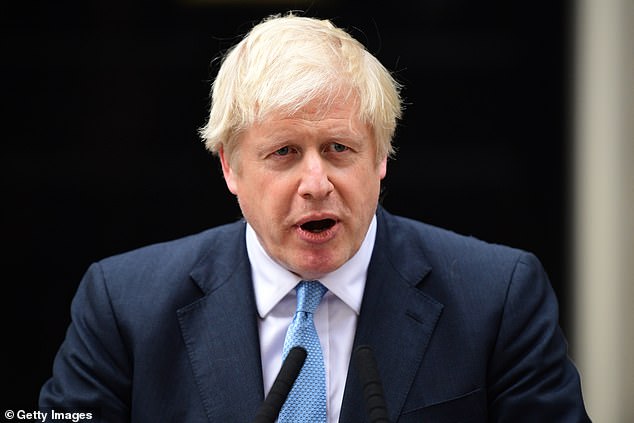 Prime Minister Boris Johnson delivering his speech outside Downing Street. The bombshell report, produced by the Cabinet Office, warns that few individuals and businesses have prepared for the impact of No Deal because they have believed government assurances that Boris Johnson is seeking a deal with Brussels

It adds: ‘There is a risk that panic buying will exacerbate supply disruption.’

Ministers have set aside more than £6billion to prepare the UK for the possibility of No Deal, and the document suggests that in some areas, life will be able to go on relatively unchanged. A Cabinet Office source said: ‘We don’t comment on leaked documents’.

But the official assessment forecasts disruption at the Channel ports, with lorries queuing for up to two-and-a-half days to deal with new customs controls in France. It predicts that queues could stretch for more than 60 miles, blocking the M25 at the Dartford Crossing, ‘which would disrupt fuel supply in London and the South East’. Ministers are warned medical supplies will be ‘particularly vulnerable’ to delays on cross-Channel routes’ and supplies of veterinary medicines could be hit, potentially leaving the Government unable to contain an animal disease outbreak.

Worst hit by No Deal would be Northern Ireland, which has close economic links with the Republic. Ministers have said that, with limited exceptions, they will not impose new border checks.

But the Cabinet Office warns that this approach ‘is likely to prove unsustainable’ and border checks are almost inevitable.

Protests on streets and lack of fuel and drugs

‘Certain types of fresh food will decrease in a reasonable worst case scenario. Critical dependencies for the food supply chain (such as key input ingredients, chemicals and packaging) may be in shorter supply.

‘These two factors will not cause an overall shortage of food, but will reduce availability and choice and will increase price, which could impact vulnerable groups.

‘The UK growing season will have come to an end and the agri-food supply chain will be under increased pressure due to preparations for Christmas. There is a risk that panic buying will exacerbate… disruption.’

‘Protests and counter-protests will take place across the UK and may absorb significant amounts of police resources. There may also be a rise in public disorder and community tensions.’

‘The reliance of medicines and medical products’ supply chains on the straits crossing [the Channel] make them vulnerable to severe extended delays; three-quarters of medicines from the EU come via [the Channel]. Whilst some products can be stockpiled, others cannot. The Department of Health is developing a multi-layered approach to mitigate these risks.’

‘UK citizens travelling to and from the EU may be subject to increased immigration checks. This may lead to delays at St Pancras, the Channel Tunnel and Dover. It is [also] likely delays will occur for UK arrivals and departures at EU airports and ports.’

‘On day one, 40-70 per cent of HGVs travelling via the [Channel] may not be ready for French customs. [This] could reduce the flow rate to 40-65 per cent of current levels within one day. Maximum queues in Kent could reach around 8,500 HGVs, which would manifest in delays of 1.5-2.5 days for HGVs.’

‘Traffic disruption caused by border delays could affect fuel distribution in the local area… Customer behaviour could lead to local shortages in other parts of the country.’