From a ‘suitcase full of booze’, a BIRTHDAY CAKE for Boris, ‘BYOB parties and one-year-old Wilfred’s broken swing: The Downing Street parties that broke the law while the rest of the country was locked down

From a suitcase ‘full of booze’ to ‘BYOB’ bashes and a raucous garden gathering that ended in baby Wilf’s swing being broken – the details of the parties held at Downing Street while the rest of the nation was in lockdown caused widespread fury.

Boris Johnson is believed to have attended at least six illegal parties investigated by the Met, meaning his fine – announced today – could have been for any one or even all of them.

These include his 56th birthday party in the Cabinet Room in June 2020 where, in the words of one Tory MP, he was ‘ambushed by a cake’.

Embattled Chancellor Rishi attended the gathering as did the PM’s wife, Carrie, who were also both fined today. The Met has still not revealed which events their fixed penalty notices were for.

Downing Street are said to have held ‘wine-time Fridays’ every week throughout the pandemic which Mr Johnson attended, with staff even investing in a £142 drinks fridge to keep their beer, prosecco and wine cold.

Government aides were encouraged by the prime minister, who regularly oversaw the gatherings, to ‘let off steam’ at the regular drinks which would often continue until the early hours, sources told The Mirror.

Staff took turns to stock up on drinks at the local Tesco Metro with a wheely suitcase to fill up the 34-bottle fridge which was delivered through the back door of Downing Street on December 11, 2020, extraordinary pictures revealed.

At the time, households were not allowed to mix indoors or in most outdoor places with exemptions for people in support bubbles, and a maximum of six people were allowed to meet in some outdoor public spaces like parks and public gardens.

Today’s fines are particularly embarrassing given the Prime Minister, speaking in the Commons in December after allegations about parties in Downing Street first emerged, said ‘all guidance was followed completely in No 10’.

Below are details of all the gatherings that were investigated by police.

A leaked email from the Prime Minister’s principal private secretary, Martin Reynolds, showed No 10 staff were invited to ‘bring your own booze’ to an event in the Downing Street garden.

Mr Johnson admitted he was there for 25 minutes but said he thought it was a ‘work event’ to thank staff for their efforts during the pandemic. 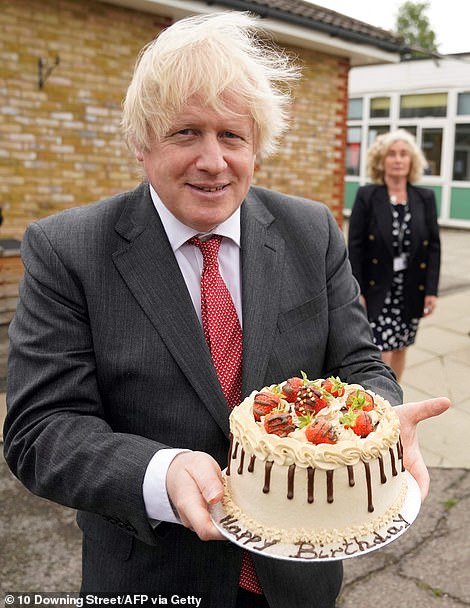 Mr Johnson with a cake during a visit to a primary school on the day of his 56th birthday. A lockdown-breaking bash was held later that day

Senior civil servant Sue Gray’s interim report said a gathering in the 70 Whitehall building was held to mark the departure of a No 10 private secretary.

The event had not previously been disclosed but The Telegraph said the official in question is former home affairs policy adviser Hannah Young, who left Downing Street to take up the role of deputy consul general in New York.

The newspaper said it understood about 20 people attended, with alcohol consumed.

Downing Street has admitted staff ‘gathered briefly’ in the Cabinet Room in what was reportedly a surprise get-together for Mr Johnson organised by his now wife Carrie.

Lulu Lytle, the interior designer behind lavish renovations of the Downing Street flat, briefly attended while undertaking work there.

It was after this gathering that Tory MP Conor Burns claimed Mr Johnson had been ‘ambushed by a cake’.

No 10 denied a report that, later the same evening, family and friends were hosted upstairs to celebrate the occasion.

Mrs Johnson reportedly hosted parties in the official flat over No 11 where she and her husband live, including one event on November 13, the night of Dominic Cummings’ acrimonious departure.

A spokesman for the Prime Minister’s wife called the claim ‘total nonsense’.

But reports have since suggested that the Prime Minister was seen heading up to the flat on the night in question, with the Mail On Sunday stating that Abba songs, including The Winner Takes It All, were heard coming from the residence. 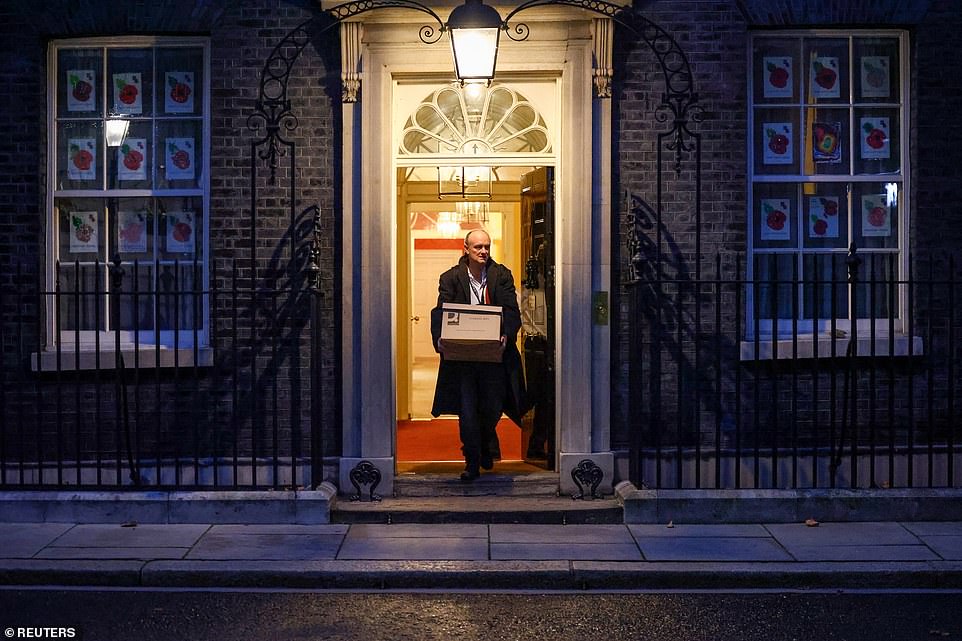 Mrs Johnson reportedly hosted parties in the official flat over No 11 where she and her husband live, including one event on November 13, the night of Dominic Cummings’ acrimonious departure

Mr Cummings, former de facto chief-of-staff at No 10, has alleged there are photographs of parties held at the flat during lockdown and said he has spoken to people who heard music coming from the Johnsons’ accommodation on the night he left Downing Street.

According to reports at the time, Mr Johnson gave a leaving speech for Lee Cain, his departing director of communications and a close ally of Mr Cummings.

Mr Johnson gave a leaving speech for Lee Cain, his departing director of communications and a close ally of Mr Cummings.

Other bashes that police didn’t investigate

The Prime Minister and his wife – apparently holding their newborn baby, Wilf – were seen sitting at a table with two people while another 13 were pictured with bottles of alcohol nearby at a table and on the lawn on Friday May 15, 2020. 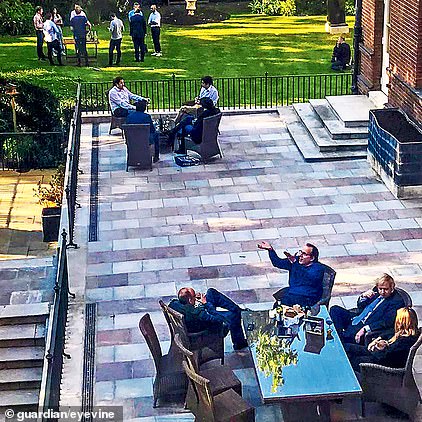 The Mirror reported that the PM gave a farewell speech to an aide at the end of November while the lockdown in England was still in place.

Other reports have said the leaving do was for Cleo Watson, a senior Downing Street aide and ally of Mr Cummings.

The DfE confirmed a social event happened after The Mirror reported that former education secretary Gavin Williamson threw a party and delivered a short speech at an event organised at his department’s Whitehall headquarters.

A spokesman acknowledged that ‘it would have been better not to have gathered in this way at that particular time’.

Cabinet Secretary Simon Case removed himself from the inquiry into Whitehall parties – to be replaced by Ms Gray – after reports emerged of a gathering in the Cabinet Office.

It was reported that the do had been organised by a private secretary in Mr Case’s team, and that it was noted in digital calendars as ‘Christmas party!’ and included an online quiz.

The Cabinet Office said Mr Case played no part in the event ‘but walked through the team’s office on the way to his own’.

The former director-general of the Government’s Covid Taskforce said she was ‘truly sorry’ over an evening gathering in the Cabinet Office for her leaving drinks during coronavirus restrictions days before Christmas in 2020.

Kate Josephs, who is now chief executive of Sheffield City Council, said she gathered with colleagues who were in the office that day and added that she was cooperating with the Ms Gray’s probe.

The Sue Gray update said the police are also probing a gathering in Downing Street held to mark the departure of a Number 10 official on December 17.

The Telegraph reported that the staff member in question was Captain Steve Higham, then one of Mr Johnson’s private secretaries, who advised on defence and national security issues.

The Mirror, which first reported the event before the police investigation began, said Mr Johnson was only there ‘for a few minutes’.

The claim that kicked off the rule-breaking allegations is that a party was held for Downing Street staff on December 18.

Officials and advisers reportedly made speeches, enjoyed a cheese board, drank together and exchanged Secret Santa gifts, although the PM is not thought to have attended.

Mr Johnson’s spokeswoman, Allegra Stratton, quit after being filmed joking about it with fellow aides at a mock press conference – although it is not clear whether she attended.

A gathering was held in No 10 to mark the departure of two private secretaries.

Reports have suggested the Prime Minister attended the leaving event, which was for a senior civil servant in the Department for Digital, Culture, Media and Sport, according to The Telegraph.

The other official’s identity is so far unknown.

Drinks and dancing the night before the Duke of Edinburgh’s funeral: April 16, 2021

The Telegraph reported that advisers and civil servants gathered after work for two separate events on the Friday night.

They were to mark the departure of James Slack, Mr Johnson’s former director of communications, and one of the Prime Minister’s personal photographers. 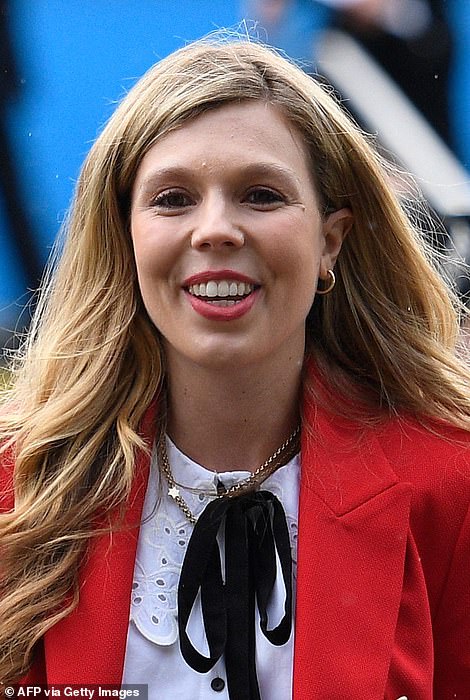 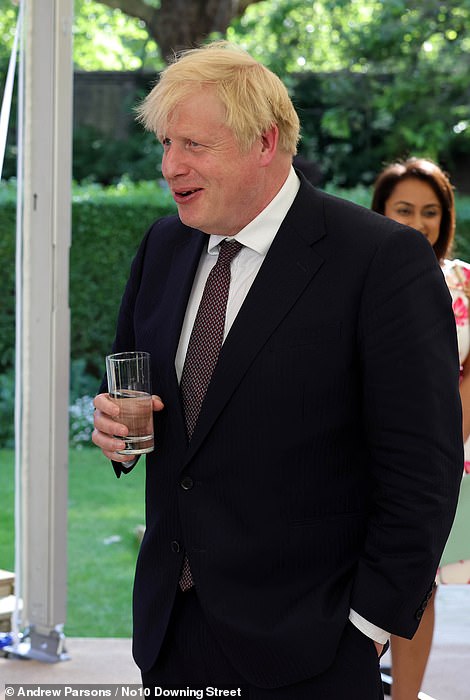 Carrie Johnson (left) was also fined today. Mr Johnson is seen on the right drinking water at a reception for teachers in June 2021 which did not break any lockdown rules

Mr Slack, who left his Number 10 role to become deputy editor-in-chief of The Sun newspaper, said he was sorry for the ‘anger and hurt’ caused by his leaving do, while Downing Street apologised to the Queen.

The Telegraph quoted a Number 10 spokesman as saying Mr Johnson was not in Downing Street that day and is said to have been at Chequers.

The newspaper reported accounts from witnesses who said alcohol was drunk and guests danced to music, adding that it had been told that around 30 people attended both events combined.

Police initially said they did not intend to investigate the quiz, during which the Prime Minister appeared on contestants’ screens.

However they later said they would review the decision after a photograph emerged of Mr Johnson alongside an open bottle of sparkling wine. 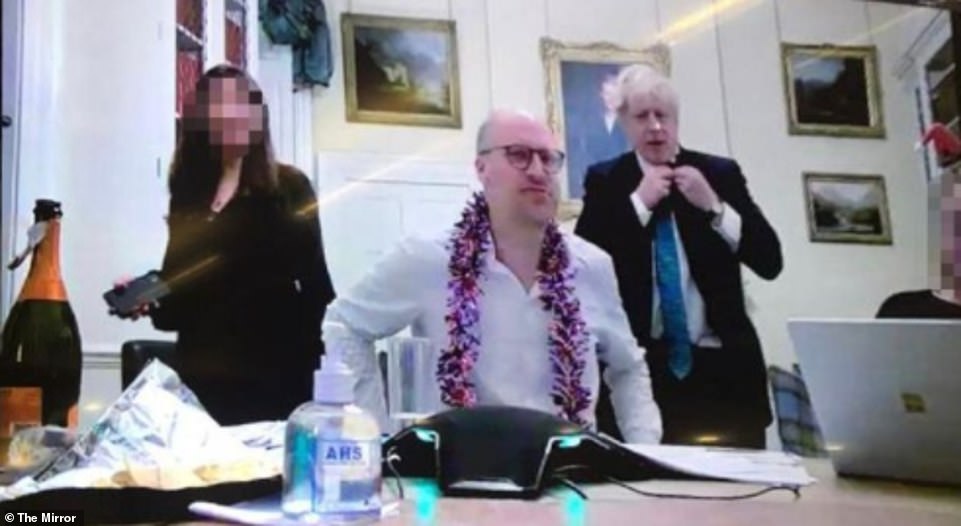 The Christmas quiz on December 15, 2020, where Mr Johnson was seen next to an open bottle of bubbly