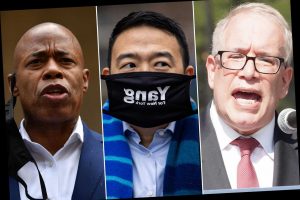 So much for “Profiles in Courage.”

“Kathryn firmly believes that government is most effective when it’s honest with people, that the public has a right to transparency, and there was clearly a breakdown of this with the nursing home data,” Garcia’s spokesperson said.

“She believes that an investigation or oversight from the legislature would be appropriate.”

And Donovan’s press secretary said, “Shaun supports a full investigation into this matter to determine the breadth and depth of this unacceptable conduct.”

“You can’t be mayor of New York City and be afraid of Cuomo,” the Guardian Angels founder and radio talk-show host said.

”They know he’s on the ropes. Show some chutzpah!”

On Sunday, Rep. Antonio Delgado (D-Rhinebeck) stood out among his colleagues by calling for a “full investigation” into recorded comments — revealed by The Post last week — by ­Cuomo’s top aide.

During a Feb. 10 video conference call, Secretary to the Governor Melissa DeRosa told Democratic lawmakers that Cuomo’s administration withheld death data from them out of fear it could be “used against us” by the federal Department of Justice.

DeRosa later issued a statement saying that officials were “comprehensive and transparent in our responses to the DOJ, and then had to immediately focus our resources on the second wave and vaccine rollout.”

On Monday, an unapologetic Cuomo doubled down on a litany of past excuses as he blamed “politics” for the spiraling scandal that’s engulfed his administration since The Post broke the story last week.

According to the latest official Department of Health figures, a total of 13,432 nursing home residents had been killed by COVID-19 as of Monday.