ONS: EU worker 'mass exodus' during Covid may have been exaggerated

Claims of a ‘mass exodus’ of EU workers from UK during the pandemic may have been exaggerated says the ONS, as it finds the number employed by British firms has only fallen 7 per cent

EU nationals working in the UK may not have fled the country during the pandemic in as large numbers as previous thought, new figures have revealed.

The Office for National Statistics admitted its Labour Force Survey (LFS) may have ‘significantly overstate(d) the change in the non-UK national population’ in the year to December.

It reported a 20 per cent fall in the number of EU nationals – around 500,000 people. But Real Time Information (RTI) taken from PAYE tax records suggested that the decline in employed EU nationals was closer to 7 per cent, or 185,000 people.

It blamed several issues, including the LFS moving to a telephone survey, meaning ‘a lower level of response from non-UK nationals’ that may have skewed the figures. 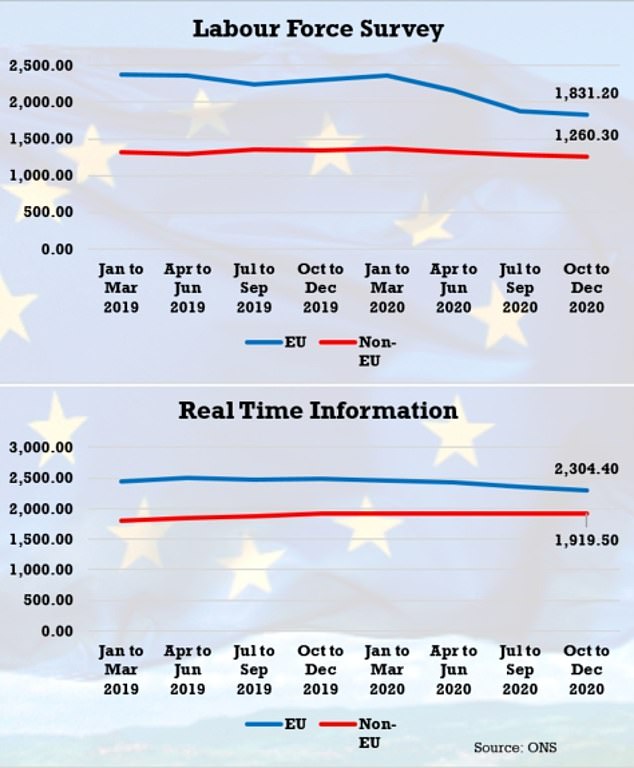 In January it was reported that the UK population may have shrunk by 1.3million amid the coronavirus pandemic – a fall which would be the largest recorded since the Second World War.

A new report published by The Economic Statistics Centre of Excellence set out ‘illustrative’ analysis which suggests there may have been an ‘unprecedented exodus’ of foreign-born workers.

The numbers suggest that the resident population of London may have decreased by almost 700,000 alone.

The authors conducted their own analysis of the ONS’s Labour Force Survey which is one of the main sources of data on employment and unemployment in the UK.

The LFS suggested the number of people born in the UK who have a job and live in London had actually increased by more than 250,000 over the last year while the overall UK population appeared to have considerably increased.

But the authors said this seems ‘implausible’ given the damage the coronavirus crisis has done to the UK economy.

Their own analysis of the numbers suggested a slight drop in the UK-born population of approximately 55,000 and a massive drop of just under 1.3million for the non-UK born population.