Open sesame! Clever bear opens car doors like an expert in his hunt for food

Amazing footage captures the moment a human-like bear rears onto its hind legs and slides open the doors of a family’s mini-van before climbing inside to search for food.

The curious creature can be seen strolling up to the van parked outside a home in Gatlinburg, Tennessee, U.S, before opening both the rear and front doors at the same time.

A woman who had come to carry out an inspection at the house said she saw the bear approaching the car and whipped out her camera.

She said: ‘I was going to do an inspection when I saw this bear walking towards the car. She opened the minivan like a person, in fact, two doors at a time.’

The sighting took place on July 1 in Gatlinburg, an area known for its proximity to the 520,000-acre Great Smoky Mountains National Park, where approximately 1,600 black bears live.

It is not unheard of for the bears to venture from the National Park into the town of Gatlinburg to explore and look for easy access to food, with many seeming to have mastered opening a car door.

Human-like bear opens slides open one car door, then opens the driver’s door and jumps in as an onlooker watches in amazement

Tennessee Wildlife Resources Agency has warned the public not to approach or feed the bears, so that they do not lose their natural fear of humans and move into town from the national park.

In the video the bear can be seen trying to open the car with its mouth before getting up onto his two hind legs and using his paws.

The woman filming, who is in the safety of another car, can be heard saying: ‘She’s trying to open that car, right now, there she goes, oh my god. She just opened the car like a person.’

Many black bears have become ‘food conditioned’ through human interaction.

Those that have learnt that human’s often have food available and rely on them for sustenance will often become a nuisance to the human population and in some cases have to be killed – leading to the well known saying ‘a fed bear is a dead bear’. 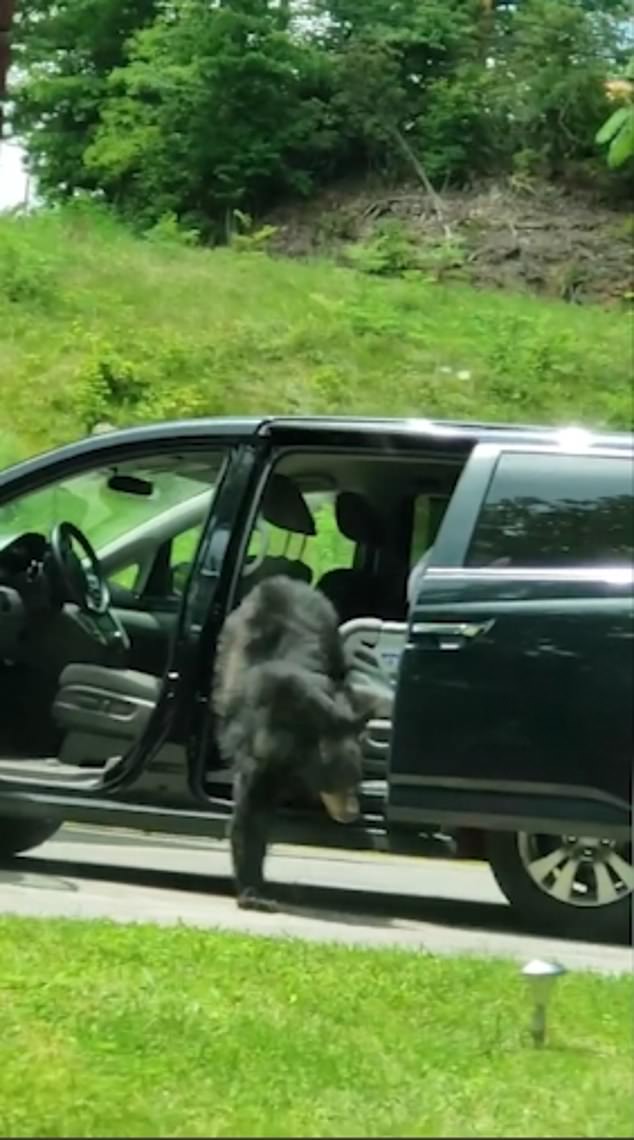 Having failed to find any food the bear departs from the car, but does not close the doors behind him